NEWS CENTER Maine's Hannah Dineen sits down with Jared Golden at his home in Lewiston to discuss his background and what has shaped him into the man he is now. 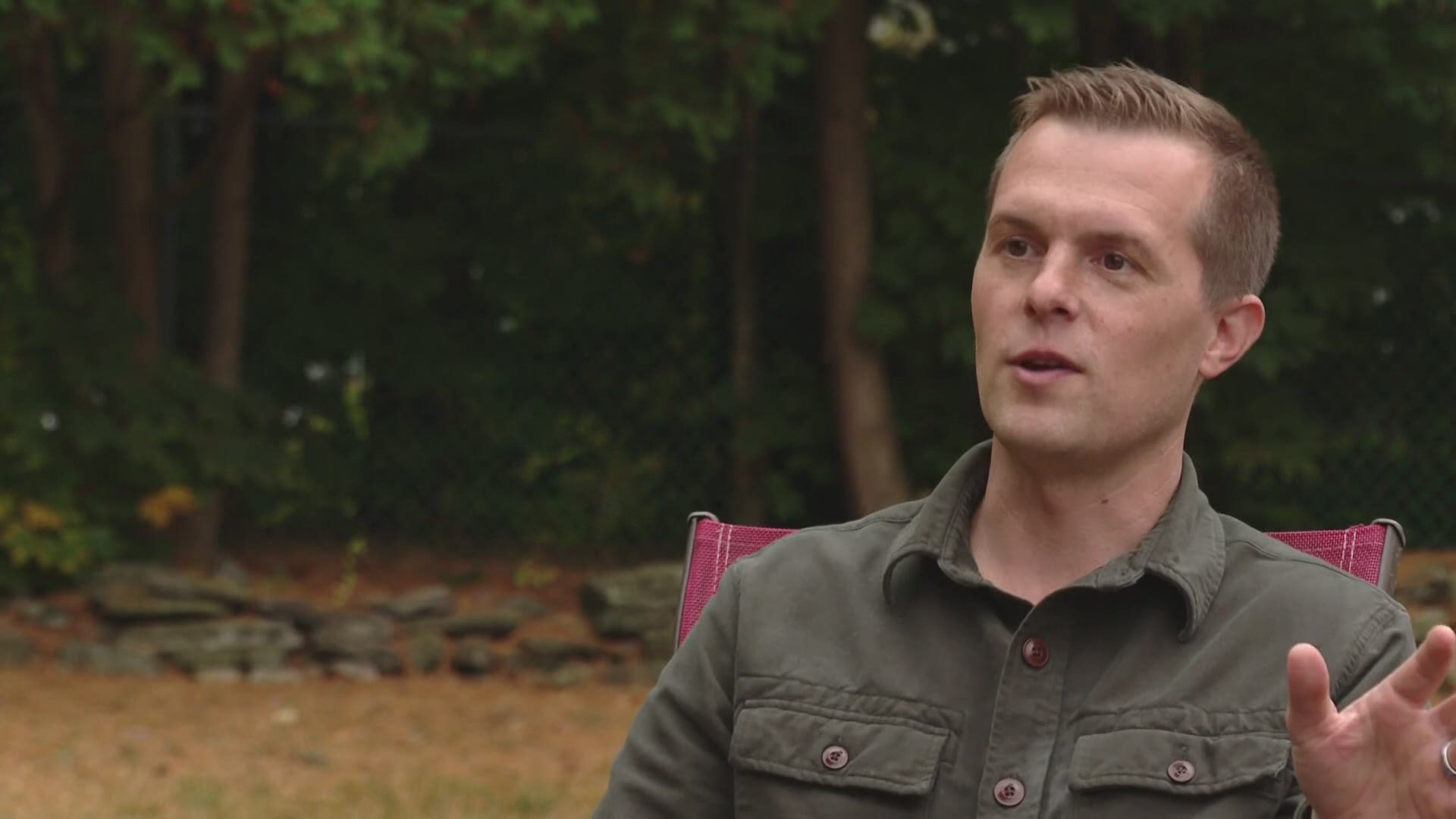 LEWISTON, Maine — On election day, voters in Maine's second congressional district (the largest district east of the Mississippi) to decide whether to re-elect congressman Jared Golden or elect his Republican challenger Dale Crafts.

To better inform voters about who they're voting for, NEWS CENTER Maine has set out to personally profile each candidate.

On Monday, NEWS CENTER Maine featured this profile of Congressman Jared Golden. It will be followed by a profile on Tuesday about Dale Crafts.

Last week, NEWS CENTER Maine's Hannah Dineen caught up with Jared Golden in his backyard in Lewiston, where he lives with his wife Isobel.

Sitting six feet apart on lawn chairs, as October leaves dropped from trees around them, Golden explained how he didn't always dream of going into politics.

"I wanted to be a high school teacher," says Golden. "I looked up to my teachers. They're public servants."

However, as he studied Education as a freshman at UMaine Farmington, that plan was put on hold. That's because Golden felt the pull the serve his country.

"It was very early on in that semester. I was sitting by chance in a Government 101 course and it was very early in the morning when class was canceled and we should all go find a television."

"It was wanting to respond to that attack that led me to finally say I'm going to join the Marines and I'm going to do something about this."

Golden says he has always recognized the importance of military service. Both of his grandfathers served in World War II.

In his time as a Marine, Golden says he learned the meaning of true selflessness. "I learned what it means to throw yourself into being a part of something that's bigger than yourself... being part of a team with high stakes... where it's not only about the entire team but it's about the mission and getting the job done."

After serving four years as a marine in Iraq and Afghanistan, Golden returned to Lewiston and to school. This time, studying history and politics at Bates College.

"My focus was on international governance and conflict and I was learning a lot about these conflicts in Iraq and Afghanistan that I had just been a part of," says Golden.

RELATED: Voice of the Voter - CD-1 candidates Pingree and Allen to meet for virtual forum

After graduating, the registered Democrat used his Bates connection to get a job in Washington D.C. serving the other political party.

Eventually, he'd pursue a political career of his own. In 2014, he ran for a state house of representatives seat and won. In 2018, he challenged Bruce Poliquin for his seat in Congress and won.

It was the first Maine election to use Ranked Choice Voting in Congressional races.

"I decided I thought I could make a difference in helping to fill some of the gaps-- not necessarily for the services for veterans-- but with the resources the state can bring to bear to connecting veterans with the Department of Veterans Affairs benefits, whether it is healthcare or education."

The Marine Corps veteran who enjoys shooting guns, hunting, and drives a large truck resists the idea that he is not a "traditional" Democrat.

"I've heard other voters in Maine's second district say 'you're an old school Democrat'. You have to ask them what that means to them, but I think it's just about looking at the roots of the party... a party that I believe has policies that are looking out for working middle-class people... that really understand what it means to work and work hard and really scrap together a living and take pride in that."

The 38-year-old says his work in politics and for the state of Maine isn't complete and hopes Mainers will allow him to serve another two years in Congress.

"I know from my life experience what service is about. I know that it's about putting other people ahead of yourself. I hope that people understand I recognize this had been an honor that I've been given to represent them. And I hope they'll look at the job that I've done and want to give us another two years to do this job that we've done together. But ultimately that's up to them and they'll decide on November 3rd."