Connor Ridley is raffling off a bike he won through a school reading contest to help 13-year-old Connor Dobbyn in Pennsylvania who has Sanfilippo Syndrome Type C. 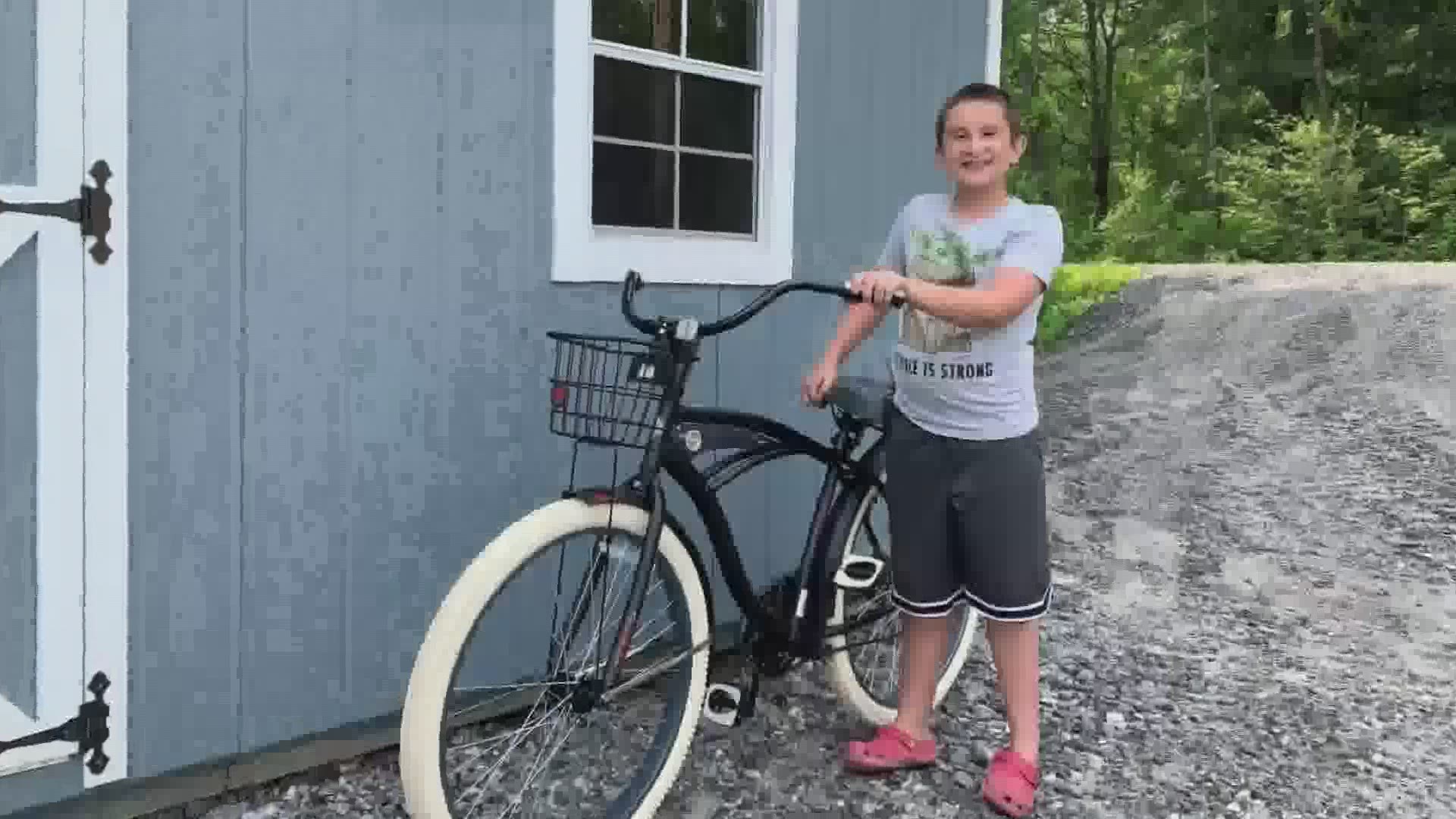 BOWDOIN, Maine — On a hazy Tuesday morning, 11-year-old Connor Ridley wheels a bike down the dirt road that leads to a home he shares with his mom and brother in Bowdoin. It's clear this bike is new, with a metal body that hasn't been scratched yet and gleaming spokes on the wheels -- but Ridley isn't planning to have it for much longer. That's because this summer, he's taking on a mission that's much bigger than just himself -- and involves a boy he has never even met.

"I wanted to raise money for this kid, so he could do the same stuff that I do," Ridley told NEWS CENTER Maine matter-of-factly, perched on the edge of a blue Adirondack chair in the shade. He's talking about 13-year-old Connor Dobbyn, who lives in Pennsylvania and is battling a rare and life-threatening disorder called Sanfilippo syndrome Type C. Only one in a million kids is diagnosed with this disorder, which is comparable to a childhood version of Alzheimer's disease.

Dobbyn first received an autism diagnosis at the age of six, since his developmental gap was getting wider. When he was 10 years old, his IQ dropped from 100 to 60. That prompted his family to look into genetic testing again, which is when they found out Dobbyn had Sanfilippo Syndrome Type C, caused by a missing enzyme in his brain cells needed to remove waste. Without it, brain damage happens, and people lose to ability to do basic things like walking, talking, eating -- everything.

An 11-year-old from Bowdoin is raffling off a bike he won to help raise money for a kid he has never met who’s battling a rare and life-threatening disorder. This story featuring two inspiring “Connors” on @newscentermaine at 6:30 a.m. #wakeMEup pic.twitter.com/kKgAYMGnjk

RELATED: Their 12-year-old has childhood 'Alzheimer's.' $3 million is their only hope for saving him.

"The story just broke my heart. Like, it killed me because it could've just as easily been my boy," said Jen Carroll, Ridley's mom. She grew up with Dobbyn's dad, Mike, and says she remembers he was always friendly and nice in school. They reconnected via Facebook in adult life, despite living hundreds of miles away -- and two years ago, she saw Mike's post about his son's diagnosis. She says she has been impressed by the family's fight.

"I don't know that I would've had the strength to do that," Carroll expressed. "I mean, I might've just died inside and gone to therapy and held my boy's hand."

An annual contest happens at Bowdoin Central School where Ridley was a student called "Bikes to Books", encouraging students to read as much as they can, with the possibility of winning a brand new bike. Carroll says Ridley was very excited when he came home one day after hearing about the contest, which surprised her at first.

Instead, Ridley wanted to win the bike to give to a good cause. Eventually, he suggested selling the bike and giving the money to Dobbyn's family to contribute to the multi-million dollar price tag for a clinical trial, which won't cure the disorder but would stop its progression. Carroll suggested doing a raffle, instead, to help raise even more money -- and Ridley jumped right on board, logging his hours of reading books like Harry Potter and the Magic Tree House series. That time paid off because he won -- and Carroll says she was really proud.

"He is a gift that I didn't ever deserve. He just inspires me every day," Carroll smiled.

Earlier this week, the initiative passed the $1,000 mark, as people buy raffle tickets and also just make donations for the cause. The support means a lot to Mike who says what the future holds is still unclear.

"Who knows how this will play out -- but it gives us the best shot at doing what we need to do, which saves Connor's life," Mike expressed via Zoom.

The life expectancy for Sanfilippo syndrome Type C is teens to early adulthood, which is why Mike says he and his family have been acting aggressively and taking all the help they can get. They've already seen some regression in Dobbyn's abilities -- he now has hearing aids, which he didn't need six months ago, and his speech gets less intelligible every week.

"Connor's 13 right now, so this is very much a race against time," Mike said, later adding, "There's only so much waiting I can do when it's a ticking time bomb."

RELATED: Pancakes for a purpose, raising money for a Maine kid with rare childhood Alzheimer's disease

Those who know Ridley aren't surprised by his gesture.

"He's a quiet leader. He's not afraid to be who he is, and he's just quietly kind to everyone," Bowdoin Central School principal Keith Ryan said, also noting, "It makes me the proudest when I see our students exhibiting those core values, and he does that well."

For Carroll, the outpouring of generosity and community support so far has meant a lot.

"I'm just completely amazed by the responses from complete strangers all over the state," Carroll said. "It's really overwhelming."

If you would like to support this cause, you can email Carroll for details at kiddprincess77@gmail.com. You can also send donations or money for raffle tickets to Bowdoin Central School at 1460 Main Street, Bowdoin, ME 04287. Carroll says they'll be collecting until Saturday, August 14.

All of the money Dobbyn's family raises is going to the Cure Sanfilippo Foundation. You can learn more about Dobbyn's journey and Sanfilippo syndrome Type C in general by clicking here.