Since November of 2019, residents and visitors to Barters Island have had to use a one lane, temporary, steel bridge, which bangs and rumbles when vehicles cross it. 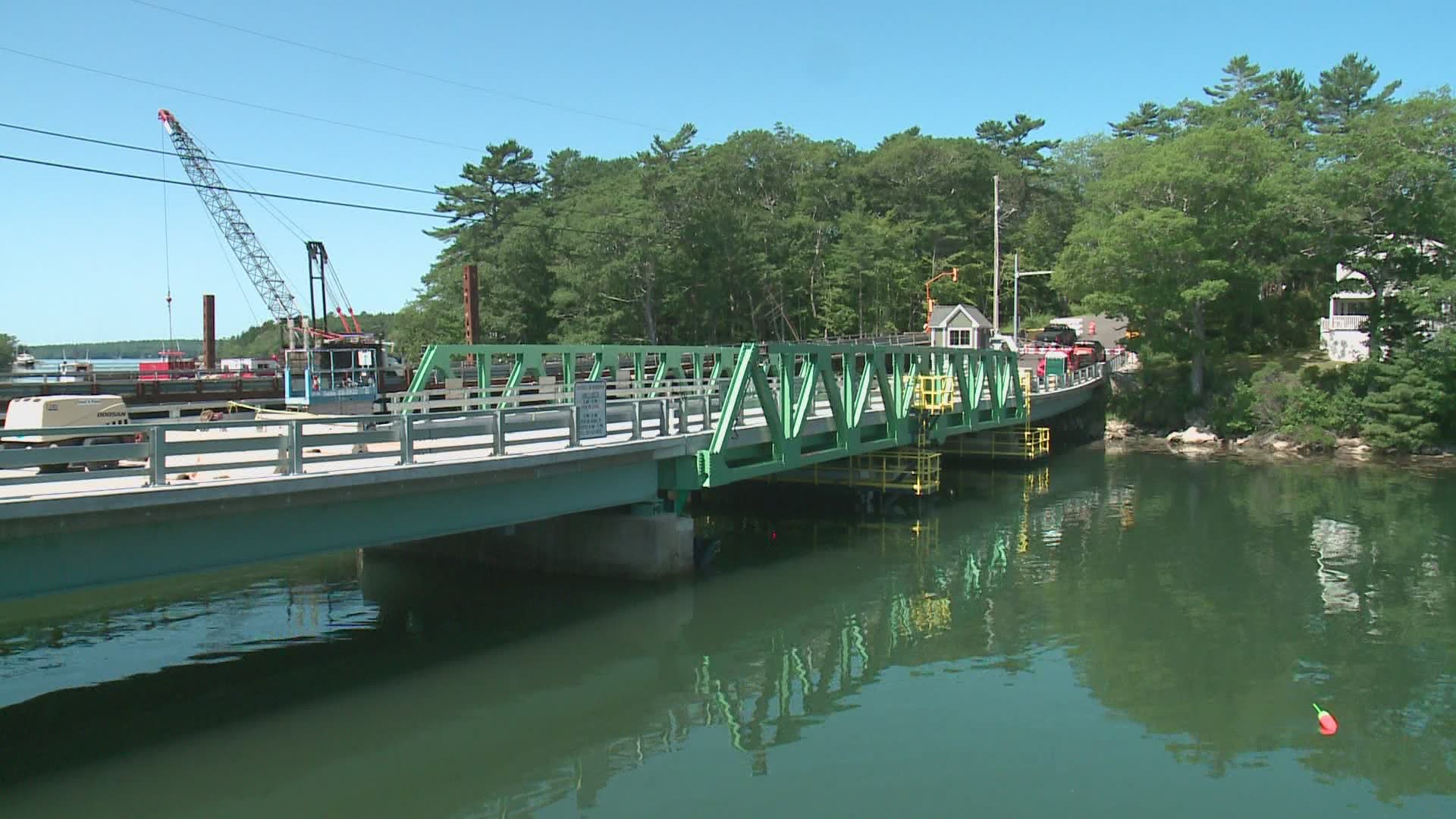 BOOTHBAY, Maine — Tom Reed stood on the immaculate deck of the new Barters Island drawbridge, minutes after the 110-foot span silently swung open and then closed. It was the 11th or 12th time it had done so Friday morning.

There was both satisfaction and relief as he described the frustrating 18 months his company, Reed and Reed, has experienced while working to complete the bridge.

It was originally scheduled to be complete in May of 2020, but is now expected to be opened in about ten days.

“There have been numerous issues we struggled to overcome,” Reed said.

Those include COVID, long delays getting mechanical parts and then replacement parts from manufacturers in southern states, and repeated problems with the electrical systems.

“I could point fingers all day. I point at myself, our company, DOT, designers, suppliers,” Reed said. “Nothing ever seemed to go quite the way we thought it should.”

Reed and Reed had to face shutdowns last spring because of COVID concerns, and then some of its own crew members became ill, closing the job for two weeks.

Maine Department of Transportation (MDOT) resident engineer Glenn Philbrook says most of the mechanical pieces for the bridge came from manufacturers in southern states, and slowdowns in those businesses lasted through much of last year, delaying the bridge even more.

“So six, eight, nine months of compounded delays,” said Philbrook, describing multiple issues getting needed parts. “Then troubleshooting once everything was installed.”

Both Philbrook and Reed said that took months longer. They described delays getting replacement parts from manufacturers. And repeated problems with the electrical components.

“Last summer we thought it would be open in the fall, and that didn’t happen,” said Reed.

Since November of 2019, residents and visitors to Barters Island have had to use a one-lane, temporary, steel bridge, which bangs and rumbles when vehicles cross it.

“We want to thank the community, because they’ve been very patient, we know its frustrating,” said Philbrook. He said the MDOT has only heard one complaint.

Some of that patience may now be wearing thin. Long time Barters Island contractor Dick Perkins said Friday the biggest problem has been not knowing what’s happening.

“There’s been zero communications, as far as I know, from the DOT and the contractor as to what the delays are,” said Perkins, who added that a lack of information has been the chief frustration.

On Friday, however, there was encouraging news. The MDOT said it now plans to open the bridge on Monday, Aug. 2, with an 8:30 a.m. ceremony.

One reason they are now more confident about the opening, said Philbrook, is the discovery of what appears to have been the cause of chronic electrical problems. It turns out a connector device, built and provided by an outside contractor, contained many loose connections inside the box. Philbrook said once those were discovered and repaired, the electrical issues seem to have gone away.

He said they are now operating the bridge multiple times each morning, to make sure it works properly.

There is some final painting to be done, as well as training of bridge tenders and final system checks by the designers. Once those are complete, he said, the bridge can be put into service.

“A week from Monday,” he said.

Asked how good that moment will feel, the reply came quickly.

“Oh, it will be great,” the engineer said.

Tom Reed, whose company has built several high profile bridge projects for the DOT, said it will be a relief.

“We will be very happy to get this one done,” Reed said.