Sophie Dear from Delaware saw Jameson Brooks' name on a sick kid list years ago and has been sending him cards ever since. 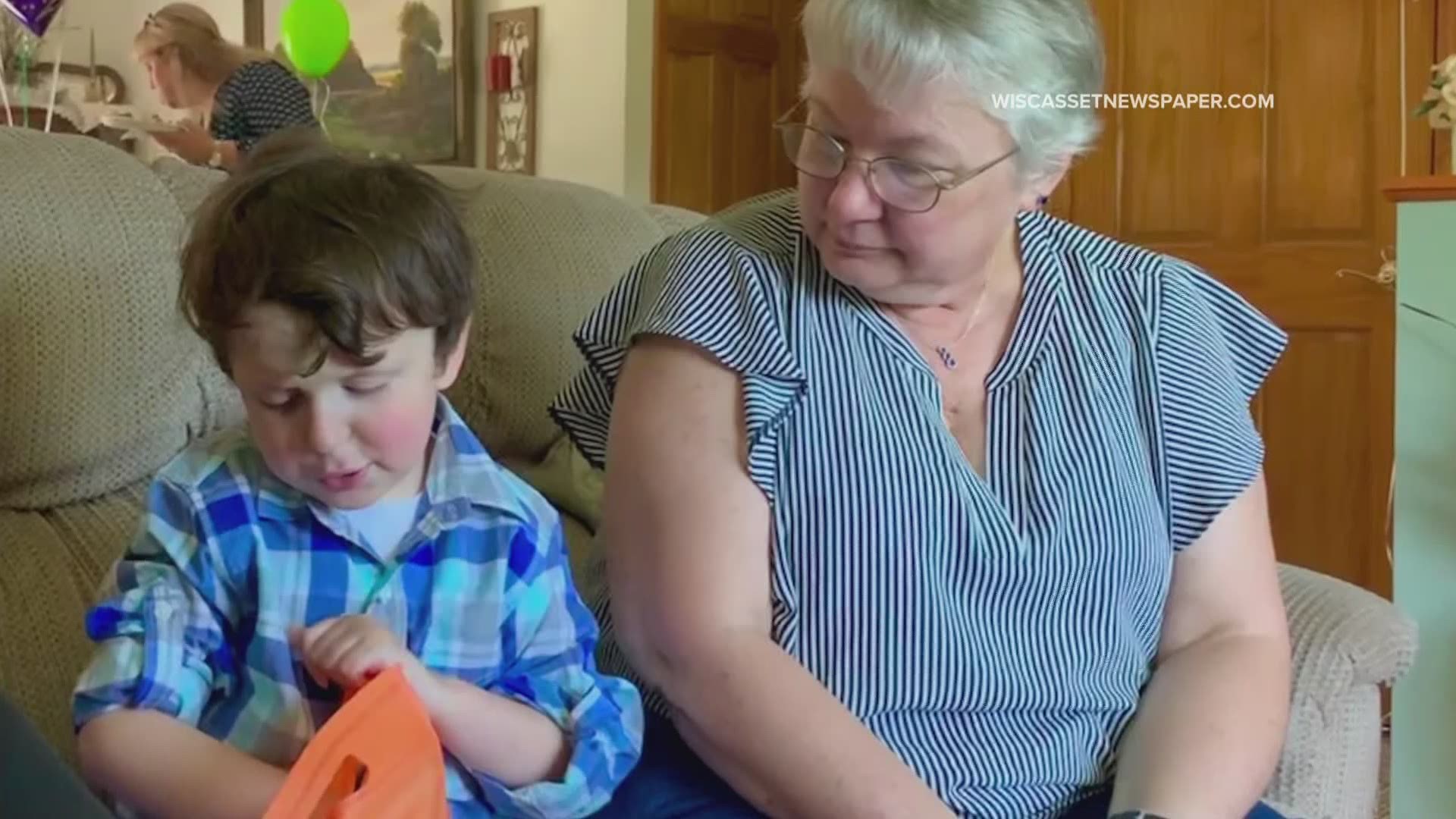 He came down the ramp at his grandmother Laura Rison’s hair salon, looked at the two news people in the yard, and said “Hi!” Then he gave his great-grandmother Dawn Gilbert a hug.

“Mimi, I miss you,” the boy said—even though he sees her often.

She calls Jameson “a miracle.”

Just a few months after he was born, the little boy was diagnosed with brain cancer. That led to years of treatments, which continue. It also caused Jameson to be blind.

His enthusiasm and eagerness to talk and tell stories appear matched by his determination to overcome the disability as he walks with the white cane and occasional guidance from his tutor.

Jameson is already well known around Boothbay and Boothbay Harbor, communities that embraced his parents and other family when he was diagnosed with cancer. Fighting his illness became a local mission, as money was raised for the family, and scores of local people reached out in multiple ways to support them.

“The girls at Hannaford spoil him, the people at Pinkham’s spoil him,” she said.

Asked if he knows a lot of people around town, Jameson gave a small smile and replied, “Yes I do.”

Both Laura and Gilbert say the support and love from people in the area have been tremendous.

“And we’ve had so many prayers," Gilbert said. “We wouldn’t have made it this far with Jameson if we didn’t have so many wonderful prayers.”

They also praised the support Jameson and the family have received from an unexpected source.

Sophie Dear, a grandmother from Delaware, found Jameson's name on a listing of children with serious illnesses and sent him a card.

Then she sent more.

Over those years, Dear became a pen pal of sorts, sending encouraging cards to Jameson and his family.

“There was just something about his situation, and his family was out there supporting him, doing everything they could for him, and I wanted him to know there was someone on the outside that thought of him also by sending cards."

Grandmother Laura and great-grandmother Dawn agreed Dear’s continuing messages have made a difference.

“It's been amazing, all of her kindness and beautiful letters she wrote,” Rinow said.

“Just a simple message,” Dear said of the many cards, “just to let him know I’m thinking of him.”

That message really hit home a few days ago, when Sophie showed up in Maine to help celebrate Jameson’s 10th birthday.

The boy admits being surprised.

Dear said he even went silent for a while when first introduced, but then warmed up to her at his party.

They have spent lots of time together in the days since.

Jameson is blind from the cancer so Sophie sends cards with stickers he can touch.

Jameson said he likes feeling the stickers, and grandmother Laura says it all made him eager to see what may come next.

“And he is now addicted to the mail. We can’t go to the mailbox without thinking there might be a letter for JJ.”

Sophie will head home to Delaware in a few days but said she’ll continue to write. The relationship with the boy and his family will make the connection even stronger, she said.

As for Jameson, he was asked if he and Dear will remain good friends, as they are now.

As they sat, side by side on a bench, Sophie Dear reassured him.