'Live and Work in Maine' is partnering with breweries statewide for its third annual "Boomerang Campaign" by giving out free merchandise with to-go orders. 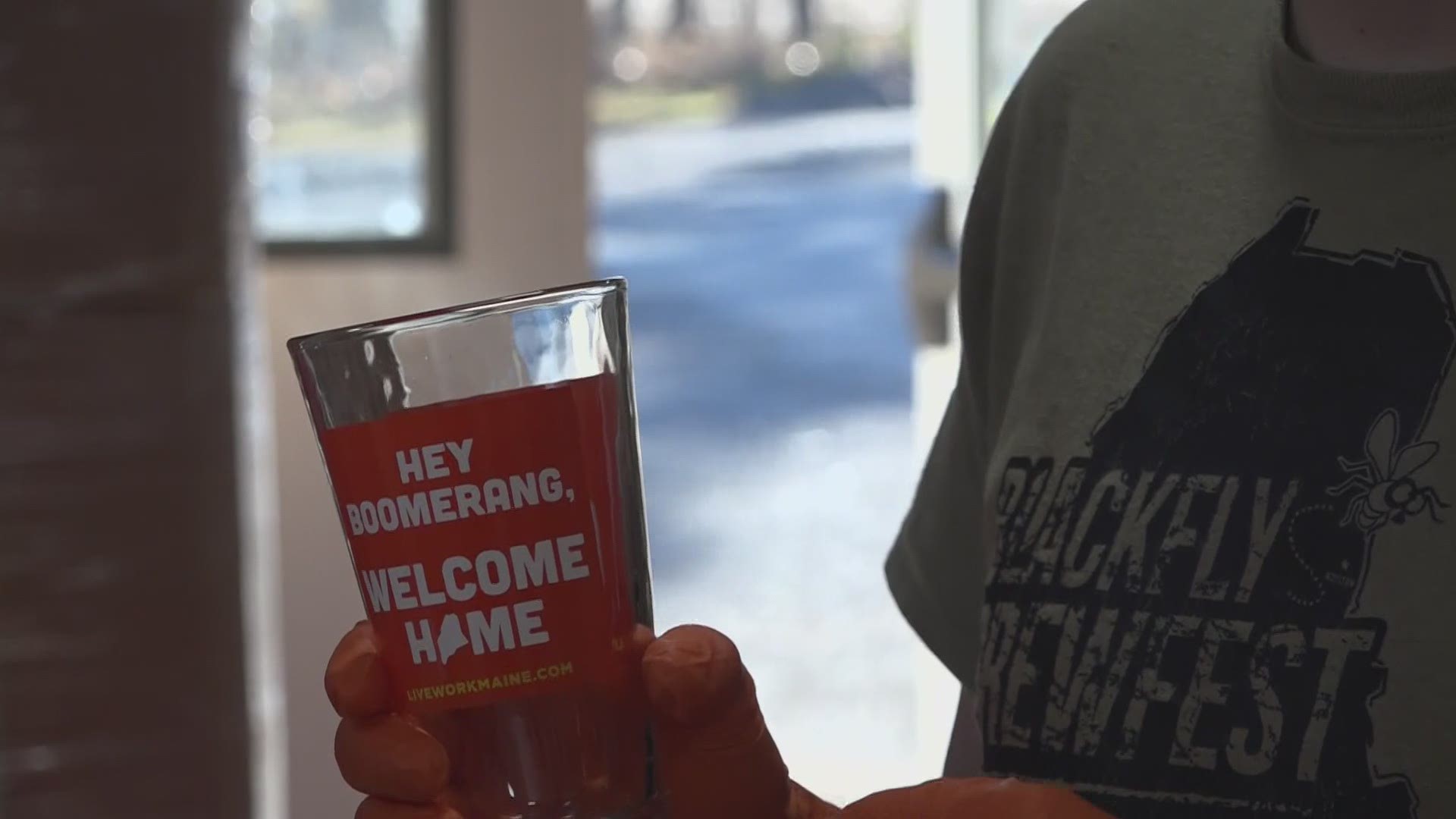 BANGOR, Maine — For many people, Maine is home for the holidays -- after all, it's hard to beat the allure of a high chance of snow in December. A local nonprofit is on a mission to get more people to see Maine as home year-round, though -- and they're still working to spread that message this holiday season despite the coronavirus pandemic.

'Live and Work in Maine' is focused on attracting people to our state to live and work here full-time, helping to grow Maine's economy and enhance its culture. This is the third year the nonprofit has put on its "Boomerang Campaign" -- typically, a partnership with bars and restaurants on the Wednesday before Thanksgiving to spread the word about its mission. Nate Wildes, the executive director of Live and Work in Maine, says that day is usually the biggest bar night of the year in the state because so many people are home visiting family.

Maine is home for the holidays for many, but @liveworkmaine wants more people to think of it as home year-round. So, the nonprofit is partnering with local breweries for its “Boomerang Campaign”. How it looks different during #COVID19 on @newscentermaine this morning. #wakeMEup pic.twitter.com/HJiirUAwSf

RELATED: Boomerang back to Maine

The outing landscape obviously isn't quite the same in 2020, so the nonprofit is working with breweries this year for to-go options instead. Anyone who comes into a participating location to buy beers for the holiday could walk away with free Live and Work in Maine merchandise -- including items like glassware, t-shirts, and coasters. The campaign starts Thanksgiving week and is running through the month of December.

Wildes say the beauty of this unconventional year is people can send these items to anyone who might be interested in the nonprofit's message, even if they don't live in Maine yet -- perhaps as an "extra push". He says the partnerships are happening statewide.

"One of the best qualities about Maine is that we're a big, small state, and so there is a small town or community for everybody here -- but there's a shared identity whether you're in Presque Isle, Fort Kent, Kittery, Portland, Brunswick, Bath," Wildes expressed to NEWS CENTER Maine.

RELATED: A large number of millennials are moving to Maine

Live and Work in Maine will be promoting participating venues on social media -- and will also be sharing pictures, videos, and testimonies from people about why they chose to be in Maine. Bangor Beer Company brewer George Church is one of them. He's originally from Wisconsin but moved to Maine in 2015 and discovered a passion for the beer industry. He says he doesn't plan to leave any time soon.

"I think Maine -- the state and the people here, they want you here; and they want you to participate and enjoy life in Maine -- participate in the culture and just sharing the experiences that we have," Church told NEWS CENTER Maine.

Wildes says the nonprofit started distributing merchandise earlier this week, and they've already heard from venues that need more supplies. He says there should be enough for about 10,000 people -- but items will be given out on a first-come, first-serve basis.