On Monday, July 19, the Legislature failed to reach the two-thirds supermajorities needed in both the House and the Senate to override Mills' veto. 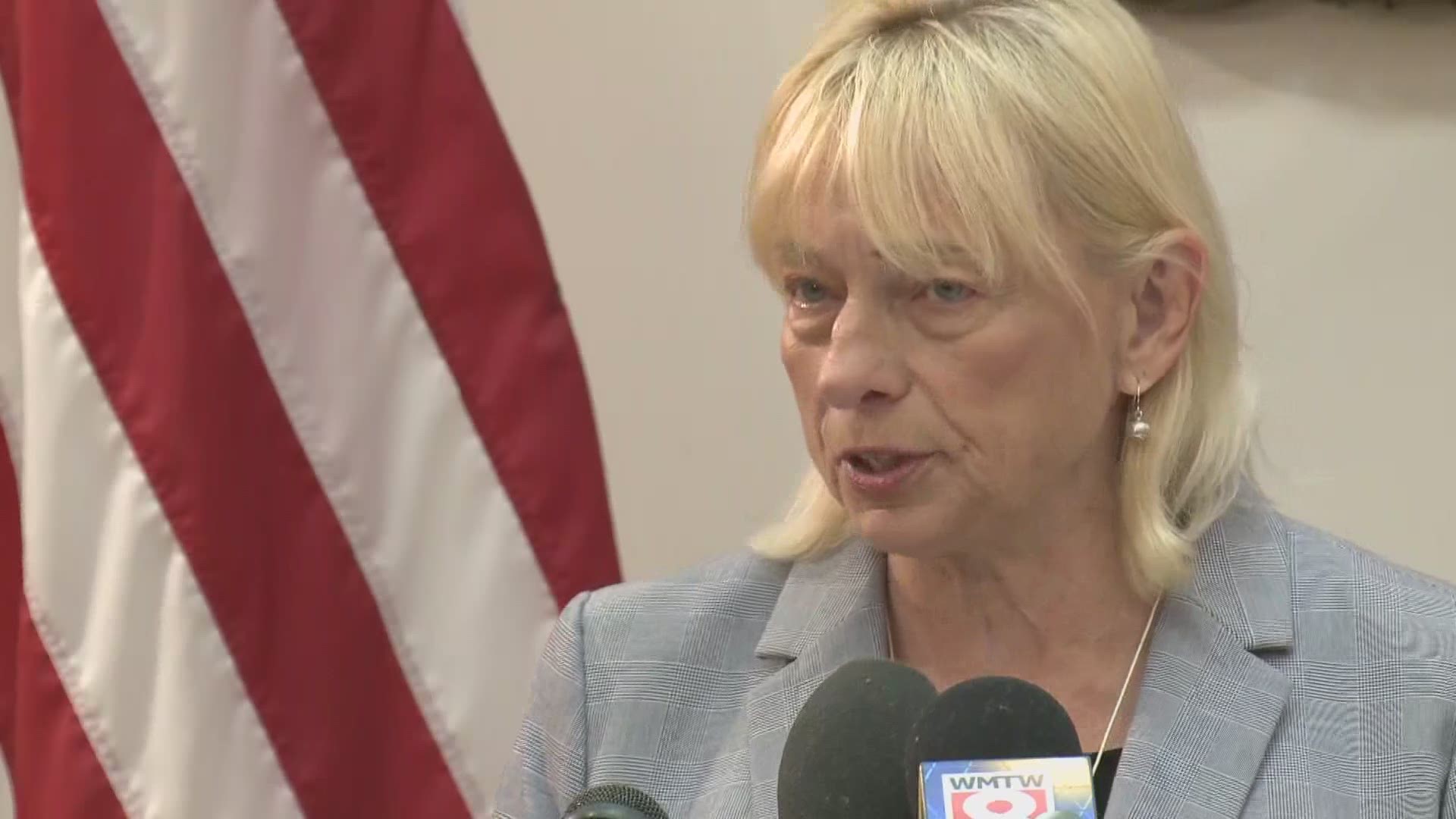 On Monday, July 19, the Legislature failed to reach the two-thirds supermajorities needed in both the House and the Senate to override Mills' veto.

The bill aimed to create a nonprofit, consumer-owned utility that would take over Central Mainer Power and Versant Power.

In her veto message, the governor called the recent performance of Maine’s utilities “abysmal” and said that “it may well be that the time has come for the people of the State of Maine to retake control over the [utilities’] assets." She also raised several outstanding concerns about the substance of the bill, noting that those concerns combined with a rushed legislative process could create more problems than the bill solves.

“LD 1708 (was) hastily drafted and hastily amended several times In recent weeks without robust public participation, seems to be a patchwork of political promises rather than a methodical reformation of Maine's complicated electricity transmission and distribution systems,” the governor said at a press conference Tuesday.

Given the far-reaching implications of the proposal on Maine citizens, Mills urged the Legislature to slow down, further consider the impacts of such a measure, and address outstanding concerns through a robust public process.

“It may well be that the time has come for the people of the State of Maine to retake control over the assets on which they depend for the lifeblood of our communities, that is, our electric transmission and distribution services. And there may be a way to create a utility with a professional governing board that is clearly eligible to issue low-interest, tax-exempt bonds that would save ratepayers money, achieve better connectivity with solar and other renewables, and further the climate goals of this Administration,” Mills said in a release Tuesday. “But L.D. 1708, hastily drafted and hastily amended in recent weeks without robust public participation, is a patchwork of political promises rather than a methodical reformation of Maine’s complicated electrical transmission and distribution system.”

#BREAKING: Governor Janet Mills has vetoed LD1708, An Act to Create the Pine Tree Power Company, which would direct a public take over of CMP and Versant. Mills says the bill was drafted too quickly and without adequate public input. @newscentermaine

In her veto message, the governor raised concerns about the bill, including its governance structure, financing mechanisms, the wording of the ballot measure, the potential for protracted litigation, the manner in which the new authority would be regulated, and delays in the attainment of the state’s climate goals.

She noted the rushed nature of the legislative process, including last-minute amendments that did not undergo a thorough vetting through the Legislature that allowed for robust public input and feedback, as well as the fact that businesses, various organizations, and community leaders across Maine have expressed concerns about the proposal.

Central Maine Power and Versant Power had responses to the veto.

Catharine Hartnett, Corporate Communications Manager for Avangrid, the parent company of CMP said, "CMP appreciates that Governor Mills, in her veto of the bill that would have sent a decision on creating a government-controlled utility to referendum, gave serious consideration to the implications for the State and all Maine people given the complexity and costs involved. CMP remains committed to offering quality customer service, providing reliable power to our customers and working to bring new sources of renewable energy onto the grid."

"We appreciate the governor's thoughtful examination of this bill. We know that LD 1708 would’ve created significant risks for Maine businesses and customers," said Long. "We’re committed to working with our customers, with local lawmakers, with regulators and other stakeholders to try to move us toward Maine’s shared climate goals. LD 1708 would be a real setback for that and making progress toward the work that our state needs to do."

Long expressed concern if the measure goes to referendum.

"Should government power proponents take us to the ballot box, we believe Maine voters will see that this is a risky proposal that could bring a lot of costs and delay to our state progress within the next few years," said Long

The bill's sponsor, Rep. Seth Berry, D-Bowdoinham, argues that Pine Tree Power is the solution to Maine's energy issues. He points to CMP and Versant's records of poor reliability and high rates as why a privately operated utility would serve Mainers better.

“I’m deeply disappointed in the veto. After winning bipartisan majority support in the committee, House, and Senate, we had hoped the Governor too would trust Maine voters to weigh in this fall," Berry said in a release after the governor's veto. "Over three years of diligent work, a diverse group of legislators, utility experts, economists, conservationists, among many others, crafted this policy to meet the complex and urgent needs of our energy future. I want to thank all of the legislators in both chambers who understood and supported L.D. 1708.

“Today the Governor vetoed our best shot at a rapid and just transition to clean energy. The leading large US utility in the race to 100% renewables is consumer-owned SMUD, with 1.5 million customers — they are 20 years ahead of Maine’s goal of 2050," Berry continued. "The first six US communities to reach 100% renewables, all before 2016, are all powered by consumer owned utilities too. The case is closed: COUs are by far the best business model to get to clean energy affordably, and to depend on for all our future energy needs.”

Sen. Rick Bennett, R-Oxford, lead Senate co-sponsor of the bill, said, “Would we trust a foreign, for-profit monopoly to own and run our public schools, our hospitals, our fire departments? Of course not. So why should we trust them with the grid that will power our entire future?"

“Rep. Berry and many others have worked hard to solicit constructive input from the Governor since 2019, have offered multiple options for compromise, and for two years have been relegated to staff unable to answer simple questions," Bennett continued. “The bill addresses every one of the questions and concerns the Governor raises in her letter. Letting Maine voters have a say at this pivotal moment was the only right thing to do.”

Berry had said before the governor's veto that a coalition called Our Power would launch a petition drive for the 2022 ballot if the bill is vetoed. Our Power campaign manager Stephanie Clifford said after the veto Tuesday that the group is "more energized than ever."

“We are disappointed, but more energized than ever," Clifford said. "With three-quarters of Mainers supporting our proposal and volunteers contacting us daily, we are confident we can collect signatures and succeed at the ballot box.”

“We have already established a diverse grassroots statewide coalition of Maine people and organizations and we look forward to having the opportunity to talk to Maine voters from Kittery to Fort Kent about the importance of creating a consumer-owned utility," she added. "Now is the time for Maine people to take control of our energy future.”

Governor Mills listened to both sides, read the bill carefully, and came to the same conclusion that many of us have come to—the proposal to seize CMP and Versant Power to create a government-run electric utility raises a lot of questions that don’t have any good answers.

The Governor is not alone in seeing the fundamental flaws in this proposal. Labor unions, the business community, mayors from across the state, and former Public Utilities Commissioners all spoke out against this bill.

The supporters of government power tried to cover up the flaws in their bill with late-night and last-minute amendments. But they couldn’t hide the fact that this proposal is simply a bad idea. Pine Tree Power would start out with $13 billion in debt to Wall Street banks that Mainers would spend decades paying off through our electric bills. It would be run by a board of elected officials who would bring politics to our electric grid. And the bureaucratic and legal fight that would come from trying to seize these two privately-owned companies would last decades, cost the state millions of dollars, and delay the investments necessary to modernize our grid and meet our clean energy goals.

NEWS CENTER Maine has reached out to Central Maine Power and Versant for comment. We will update the story with their comments soon.