Wabanaki community members and the state of Maine have been in a legal battle over the rights to more than 60 miles of the Penobscot River. 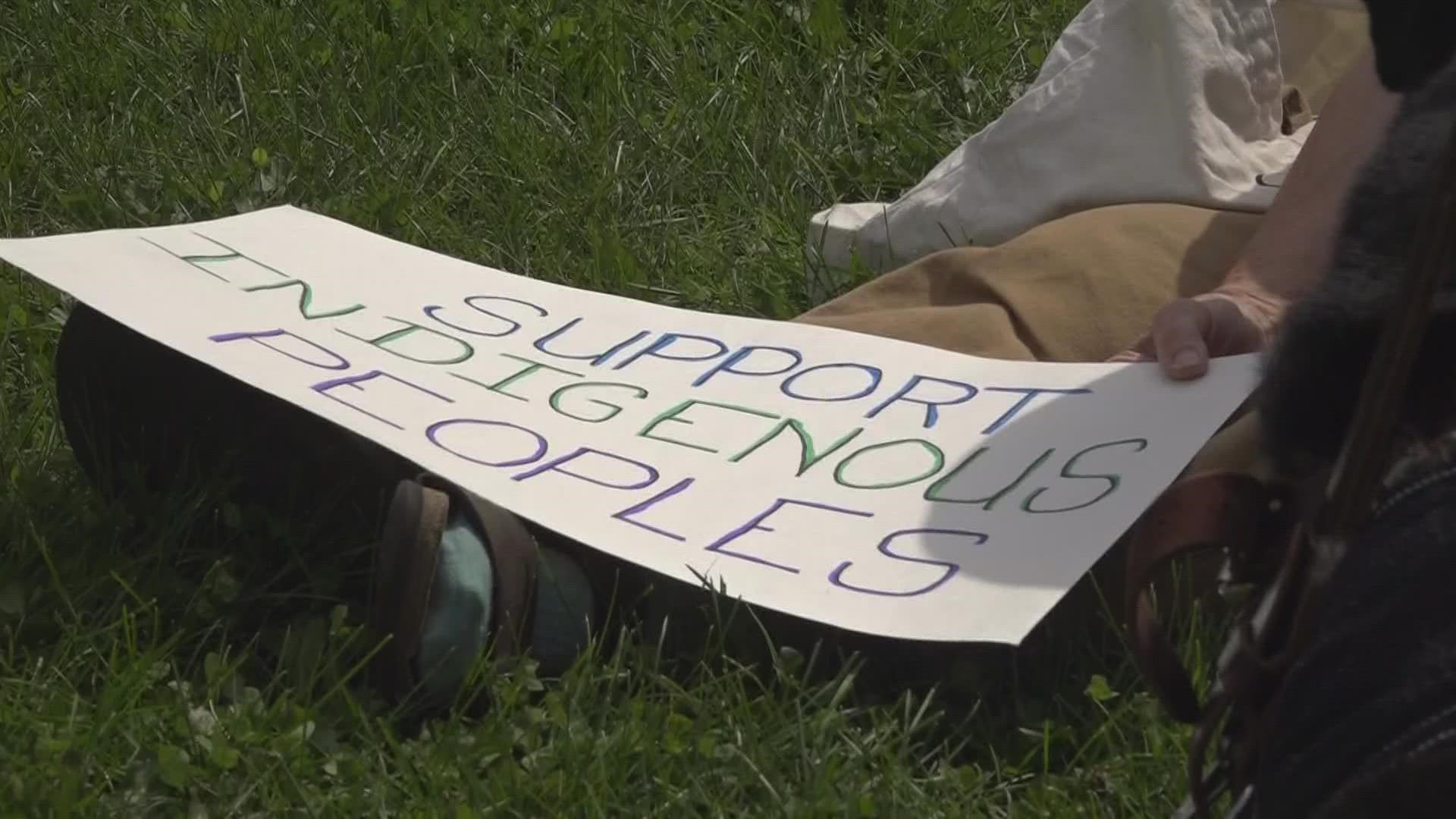 BANGOR, Maine — Wabanaki tribes in Maine held a 'solidarity rally' Sunday afternoon by the Bangor Waterfront. Their goal was to inform people about the "territorial attacks" they say Wabanaki community members have been facing in Maine for years.

The event included drumming, singing, and prayers from Wabanaki community members. They claim the state of Maine has been attempting to "steal" a portion of the Penobscot River (approximately 62 miles) from the Penobscot people.

Penobscot Nation Chief Kirk Francis says it all started in 2012, when the state of Maine claimed the Penobscot River was not a part of Penobscot Territory, and the state would have sole jurisdiction when it comes to water quality standards, environmental protection, and fishing regulations.

"Back in 2012, we received a letter from the Maine Attorney General basically saying we don't think you have any rights in the river, and if you disagree with that, then let's settle it in the appropriate forum," said Chief Francis.

NEWS CENTER Maine reached out to Governor Mills' office for comment and a spokesperson for the Governor says, in part: "Nine years ago the Penobscot Nation sued the State of Maine in Federal Court, suggesting the Penobscots had exclusive jurisdiction over sixty miles of the Penobscot River, contrary to the settlement which they signed in 1980. The Attorney General’s Office defended the State in the lawsuit, which is the charge of the office. In fact, the First Circuit Court of Appeals ruled in favor of the State of Maine in that suit."

Chief Francis says there is no treaty or agreement where the tribes ever gave up the 62 miles of the river that ran through Penobscot land.

The spokesperson for the Governor continued in the statement, saying: "The State of Maine agrees that the Penobscot River and its tributaries should be clean and that individual tribal members have a right of sustenance fishing, and it has taken the position that the river should be available for all people to use and has taken action to protect the water quality of the river and assisted in the removal of dams that blocked the passage of fish in recent years."

After Penobscot Nation took the state to court in 2012, in 2015 Chief Francis says the State of Maine ruled the Penobscot River is not a part of Penobscot Territory.

They filed an appeal in 2017 against the State, and again, they lost the case. Francis told supporters who attended the rally that the state could not explain how it came to own the main stem of the river.

An "En Banc" review of the Penobscot Nation river rights was done to see if Federal Indian Law was applied when siding with the State of Maine’s claim that no portion of the Penobscot River is within Penobscot territory.

On July 6th, 2021, in a 3-2 decision, it was decided by the First Circuit Court of Appeals that the territories of Penobscot Nation do not reach the waters of the Penobscot River, and that the river is not part of their lands.

Here's a copy of the case decision.

Chief Francis says the Penobscot River is a resource they consider a citizen of their tribe.

"We've been in litigation now for almost a decade, and it attempts to remove us from 62 miles of our reservation, and again it's a modern-day land -taking of an Indian tribe," said Chief Francis.

"The Penobscot People have lived along the Penobscot River since time immemorial. The River is our relative, one who has granted us with the gift of life and the ability to thrive. We have always been protectors of the river; she is where we derive our namesake as a people. We are just as much a part of the river as the river is a part of us. Historically the Penobscot River has been our main source for transportation and sustenance, things that have been rendered near impossible with the construction of dams along the waterways and the continued pollution of the river which makes the fish and the animals that feed upon the fish toxic to eat," said a speaker from Penobscot Nation.

"It's important to recognize whose land and territory we are on, and that we need to continue to show our support for them and listen to their voices," said supporter Anna Bradford.

Chief Elizabeth Dana was one of the speakers at the rally on Sunday. She says it's about the tribe trying to maintain its identity and protect tribal rights for future generations.

"There are people out there that want us to be restrictive, to stay invisible, to be quiet, to be submissive, to give up," said Chief Dana.

Wabanaki community members are holding a rally to inform others of the threats they say their tribes and the Penobscot River have been facing for almost a decade. #NEWSCENTERmaine pic.twitter.com/zQ4JcUHwfP

The spokesperson for Governor Mills says the administration "will continue its efforts to find solutions, and when the Tribes and the Administration sit down and negotiate difficult policy matters, progress is made for all."

"The Governor is not interested in fighting with Maine’s Tribes. She is interested in engaging in a constructive dialogue with them to make progress on important issues."