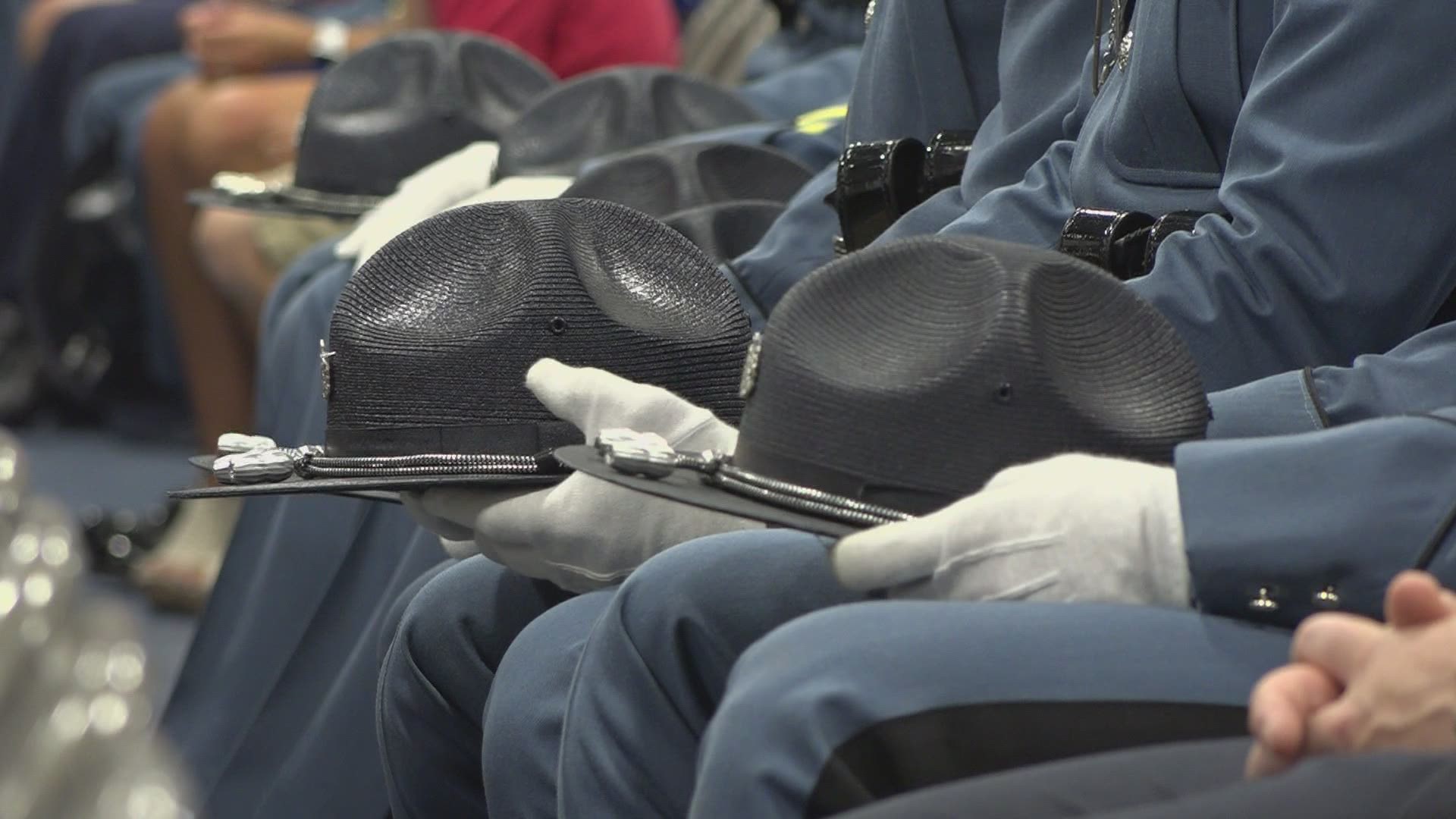 According to State Police, the ceremony is held to recognize past and present members of the Maine State Police, both civilian and sworn members, and citizens of Maine who have gone above and beyond what is expected of them.

The awards include Trooper of the Year, Legendary Trooper, Leadership Award, Wounds Received, Bravery, and the Colonel's Award.

Trooper of the Year:

Abbe Chabot is a detective with Major Crimes Unit South. A graduate of Norwich Academy in Vermont, she joined the Maine State Police on July 13, 1997. Chabot started her career as a Trooper assigned to Androscoggin County. In 2003, she was promoted to Detective in the Major Crimes Unit. In 2016, Det. Chabot joined the Computer Crimes Unit where she followed up on the most heinous of crime reports involving internet crimes against children. Chabot’s unique skillset of remarkable interview and interrogation techniques, familiarity with both physical and testimonial evidence, and knowledge of how to build a criminal case made her a valued asset for the unit. Det. Chabot joined the Major Crimes Unit South where her diligence and depth of knowledge have been a tremendous influence and resource to new detectives. In addition to her primary duties, Det. Chabot has also been a K-9 handler since 2000. Det. Chabot’s cadaver K-9s, Pivot, and Steve have collectively assisted in the recovery of almost three dozen murder victims, lost persons, and suicide victims. Det. Chabot lives in Androscoggin County with her husband and teenage daughter.

On June 14, 2020, Trooper Mickael Nunez was on patrol and monitoring a high-speed pursuit that was happening on Interstate 95 near Fairfield. Tr. Nunez made his way to Rt. 3 in China to set up tire deflating strips to terminate the pursuit. The offending vehicle sped toward his location and into the dirt shoulder where Tr. Nunez was standing. Nunez attempted to run further off the road but was struck by the vehicle. Tr. Nunez was catapulted over the car and into a ditch suffering catastrophic injuries. With the guidance of doctors and surgeons Tr. Nunez and his family ultimately decided to amputate his damaged leg. While Tr. Nunez has had many challenges and setbacks during his recovery he continues to set his sights on returning to full duty status.

On the morning of December 16, 2020, Michelle Holman was traveling on Interstate 95 in the town of Pittsfield when she came upon a vehicle parked on the side of the roadway with the driver’s side door open. Michelle became concerned when she noticed the driver slumped over the steering wheel. She acted quickly and called 911. The driver told Michelle he had accidentally shot himself and was bleeding extensively from his left leg. Michelle was able to use the driver’s belt as a tourniquet to help stop the bleeding until the Troopers and emergency personal arrived.

On Nov. 15, 2020, Trooper Connor Willard was covering a shift on Interstate-295, when he observed a vehicle pulled over on the side of the highway. Upon approaching the vehicle, Tr. Willard spoke with the driver, who told Tr. Willard, he was not doing well emotionally. Rather than move the driver along, Tr. Willard spoke with him for more than 45 minutes until he was in a better state of mind. The driver’s mother emailed the Maine State Police to let them know what an impact that conversation had on her son. She described how she felt when her son told about speaking with Tr. Willard.

She wrote: “At that moment, I got teary-eyed, knowing the Trooper may have saved my son’s life.”

In 2016 Retired Detective David Preble took on a herculean task researching and identifying every single Maine State Police Trooper since MSP’s inception in 1921. Det. Preble searched State Archives, MSP records, and personal libraries. He also conducted interviews with current and former members and then compiled official documents and verified data into an official record. Det. Preble’s work resulted in the assembly of two four-inch binders with information and rosters on every MSP hire and training class, including legislative documents and photos when available. Due to that extensive research and identification of every Trooper, past, and present, Det. Preble was also able to assign chronological badge numbers to every person who took the oath of office of a Maine State Trooper.

Tactical Team Members on October 21, 2020, the Tactical Team responded to Rockland to assist Rockland Police Department with a hostage situation. A man had taken his mother hostage inside her apartment and barricaded the door. For over an hour, entry team members stood in a hallway only feet from the apartment as they listened to repeated threats from the suspect that he would kill them and his mother if they entered. Other team members evacuated residents that we're unable to leave because of mobility issues. When the suspect’s threats to his mother began to escalate, they made their decision to use an explosive breaching charge and a hostage rescue was made. The suspect was in fact using his mom as a human shield… which he had bound with chains on her hands and feet. The entry stunned the suspect just enough to free his hands for a second…that’s when the team was able to get him into custody without using deadly force and save the hostage.

The response was an enormous risk for the tac teams’ own lives while dealing with a barricaded door, an aggressive armed suspect who is using a hostage as a human shield.

#RIGHTNOW: Maine State Police are holding an award ceremony to honor troopers and civilians who have distinguished themselves through service, bravery and innovation. We’re sharing their stories tonight on @newscentermaine. pic.twitter.com/wwCwR6FpCA

RELATED: Police tactics with European influence being taught in Maine