Shyquinn Dix said making the dean's list shows he's more than just an athlete, but the halls of his college where he walks now couldn't be more different from the halls of his prison block just shy of a year ago. 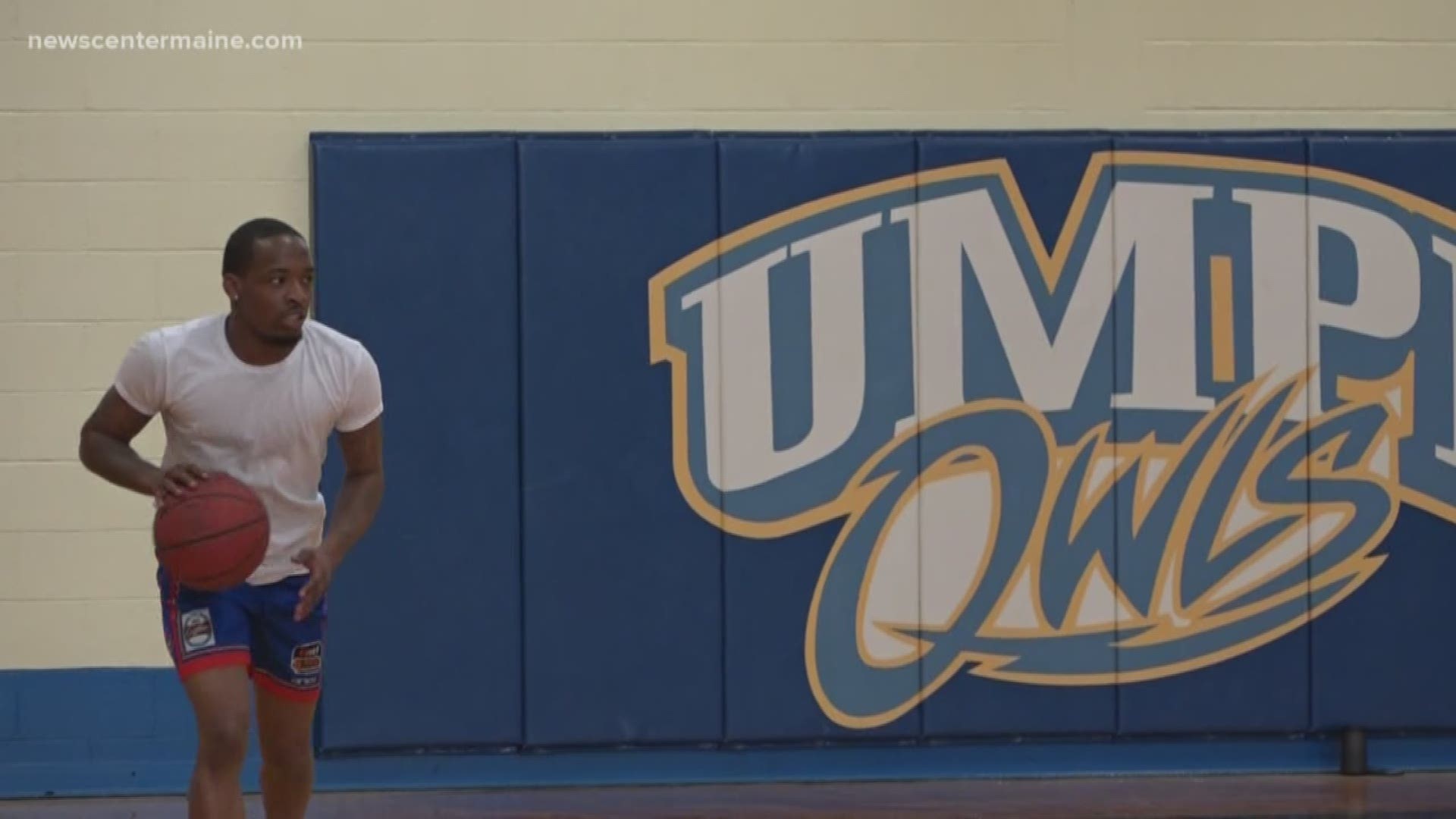 PRESQUE ISLE, Maine — When asked if he's a good baller, Shyquinn Dix responded humbly that "he's OK." A star on and off the court, the sophomore is one of the men's basketball team captains at the University of Maine at Presque Isle.

He made the dean's list for his achievements in the classroom last fall and on paper, he's a successful student-athlete with a bright future.

It's his past he's had to answer for.

Known around campus as Shy, when he's not scoring his own baskets, he's cheering on his teammates when they do.

From Stamford, Connecticut, life for Shy hasn't always been fun and basketball games.

"I grew up without a male figure in my life like my whole life, so a lot of things I had to learn myself," said Shy.

Since arriving at the northern Maine university last year, he has been learning and flourishing.

"I got comfortable fast here because people in this community are really nice," said Shy.

When he's not crushing it on the court, he's doing so in the classroom.

The social work major said making the dean's list shows he's more than just an athlete, but the halls of UMPI where he walks now couldn't be more different from the halls of his prison block just shy of a year ago.

Shy was sentenced to Cheshire Correctional Institution for four years with three years probation after being convicted of felony fraud for writing fake checks. He served two years before receiving a sentence modification to go to UMPI.

"It's unheard of to see somebody go straight from prison and then come to college," said Shy.

Shy went from playing ball in prison to playing on a division three college court all because of a dream he shared with his corrections officer.

"UMPI's a great environment," said James Vassar, a Cheshire Correctional Institution corrections officer and Shy's prison coach. "Right when I walked on campus I knew it was the place for Shy."

James Vassar runs the T.R.U.E. program for youthful offenders at Cheshire Correctional. He met Shy when Shy first signed up for the program.

"Getting his degree, he knows that's the most important thing," said Vassar. "Basketball's second. Getting your degree is number one because they can never take that away from you."

Vassar graduated from Elms College in Chicopee, Massachusetts with a degree in social work. It's the same degree Shy is pursuing at UMPI.

Humble both on and off the court, Shy said he owes a lot of his success this past year to his coaches and teammates.

"It's a little friendly competition with me just to keep up or show I could hang with him," said Shy's classmate and teammate, freshman Kajuan "KJ" Minter. "He told me right off the rip his story and I just felt it."

Shy never hid his past from his teammates, now his lifelong friends.

"It's just motivation for me," added Minter. "If he can do it, there's no telling what else anybody else could do, or I can do."

In Shy's first season as an UMPI owl, the team lost in the quarterfinals of the North Atlantic Conference playoffs.

"We want to win a championship together," said Minter. "We feel like we have something special. We have a great leader in Shy."

Shy may lead his team as one of its captains but he's under the watchful eye of Coach Dan Kane.

"I saw game film and I thought he was going to be good," said Kane of Shy. "I didn't realize how good."

Despite being the best at the net, according to one of his teammates, the team's coach and director of athletics at UMPI took a risk by taking a chance on Shy.

"I know I had some people out there that were like, 'what are you doing?'" recalled Kane. "Especially since it was my first year at a new university. Honestly, I went into it like any other recruit and then when I met with Shy, really that's what convinced me." 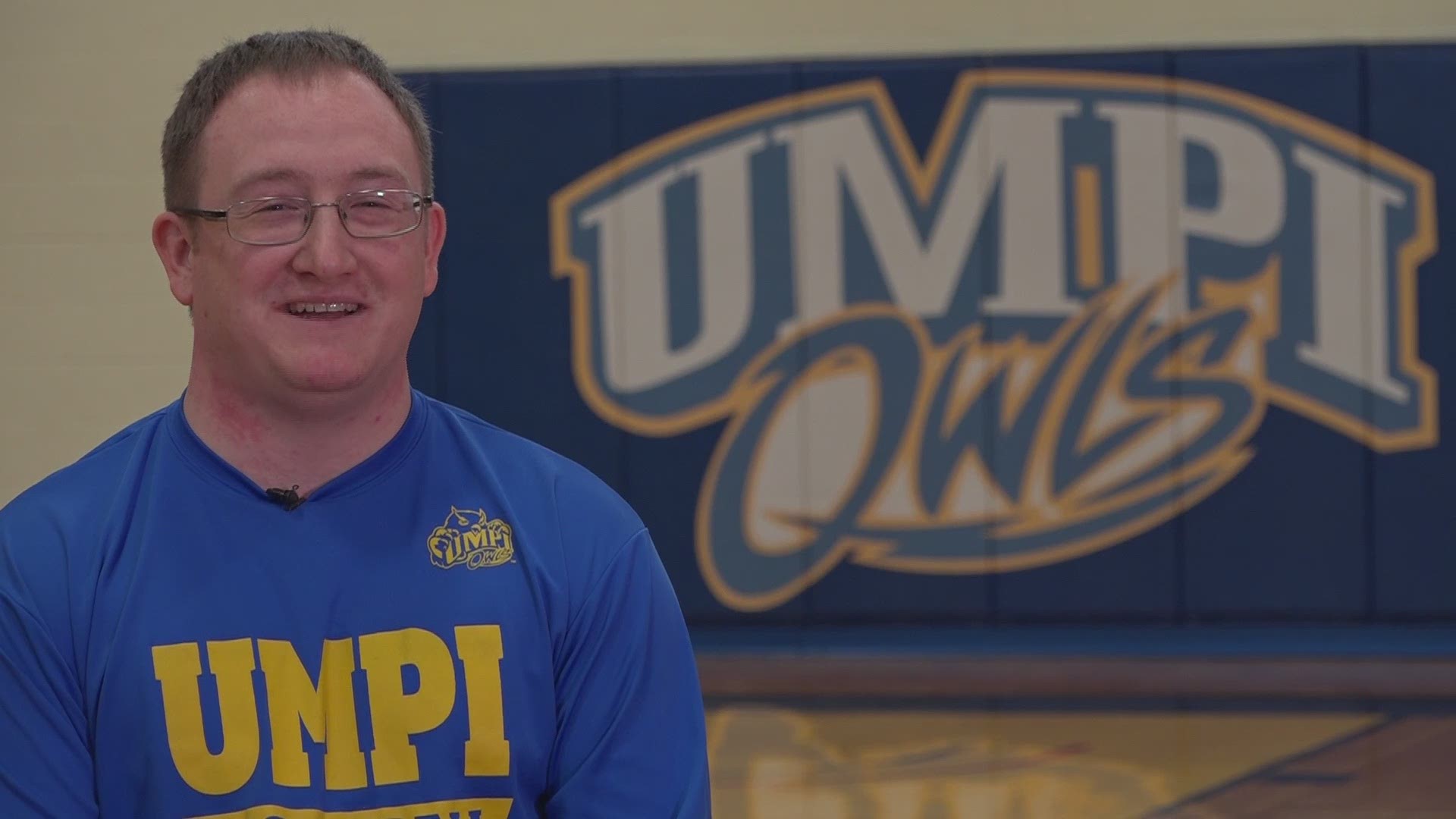 Those who know Shy best describe him as being "high on life," "full of energy," and a born leader.

"It's good to have him coming from where he came to let others know that you still can be a leader, no matter what," said Shy's roommate and teammate, freshman Dominic Crumbly. "You still can turn around and find a better way."

"As much as I know we've helped Shy out, really Shy being in our lives has really helped us out as well," added Kane.

"I don't want to be just remembered as a basketball player because to me, everything is bigger than basketball," said Shy. "I want people to remember me as being a great person and I just want to be honorable for the right reasons."

He's striving to live his life each day by his former correctional officer's motto: every setback is cause for a major comeback.

Shy's making his comeback now, and hopes for the opportunity to mentor others to their comeback moment, in the future.

Before the end of the Spring semester, Shy will be receiving the 2018-2019 UMPI Rising Star of the Year award.

According to the university, "the award recognizes an underclassman who demonstrates great potential for leadership and growth, a willingness to enhance their skills, and a desire to impact their community."