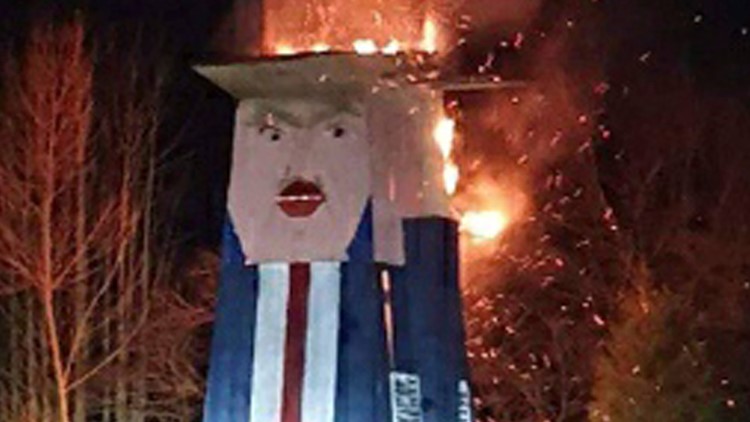 Photo by: AP
In this photo provided by the municipality of Moravce, wooden sculpture resembling U.S. president Trump is on fire, in Moravce, Slovenia, Thursday, Jan. 9, 2020. The wooden nearly eight-meter high (26 feet) statue mocking U.S. President Donald Trump that was constructed last year, has been destroyed by fire in the homeland of his wife Melania Trump. (Municipality of Moravce via AP)

LJUBLJANA, Slovenia — A wooden statue mocking U.S. President Donald Trump has been burned to the ground in Slovenia, the birthplace of his wife Melania.

The nearly 26-foot-high statue, erected last year in a village in northeast of Slovenia, showed Trump with his trademark hairstyle, blue suit, white shirt and a long red tie.

The statue became a tourist attraction but was not liked by some local villagers.

Slovenian police said Thursday that they are looking for the arsonist.

When triggered, a mechanism inside the statue opened a red-painted mouth and shark-like teeth used to appear.

In this file photo dated Friday, Aug. 30, 2019, a wooden statue resembling Donald FILE- Trump near Kamnik, Slovenia. The wooden statue nearly eight-meter high (26 feet) of U.S. President Donald Trump that was constructed in 2019, has been destroyed by fire Thursday Jan. 9, 2020, in the homeland of his wife Melania Trump.
AP Photo/Darko Bandic, FILE