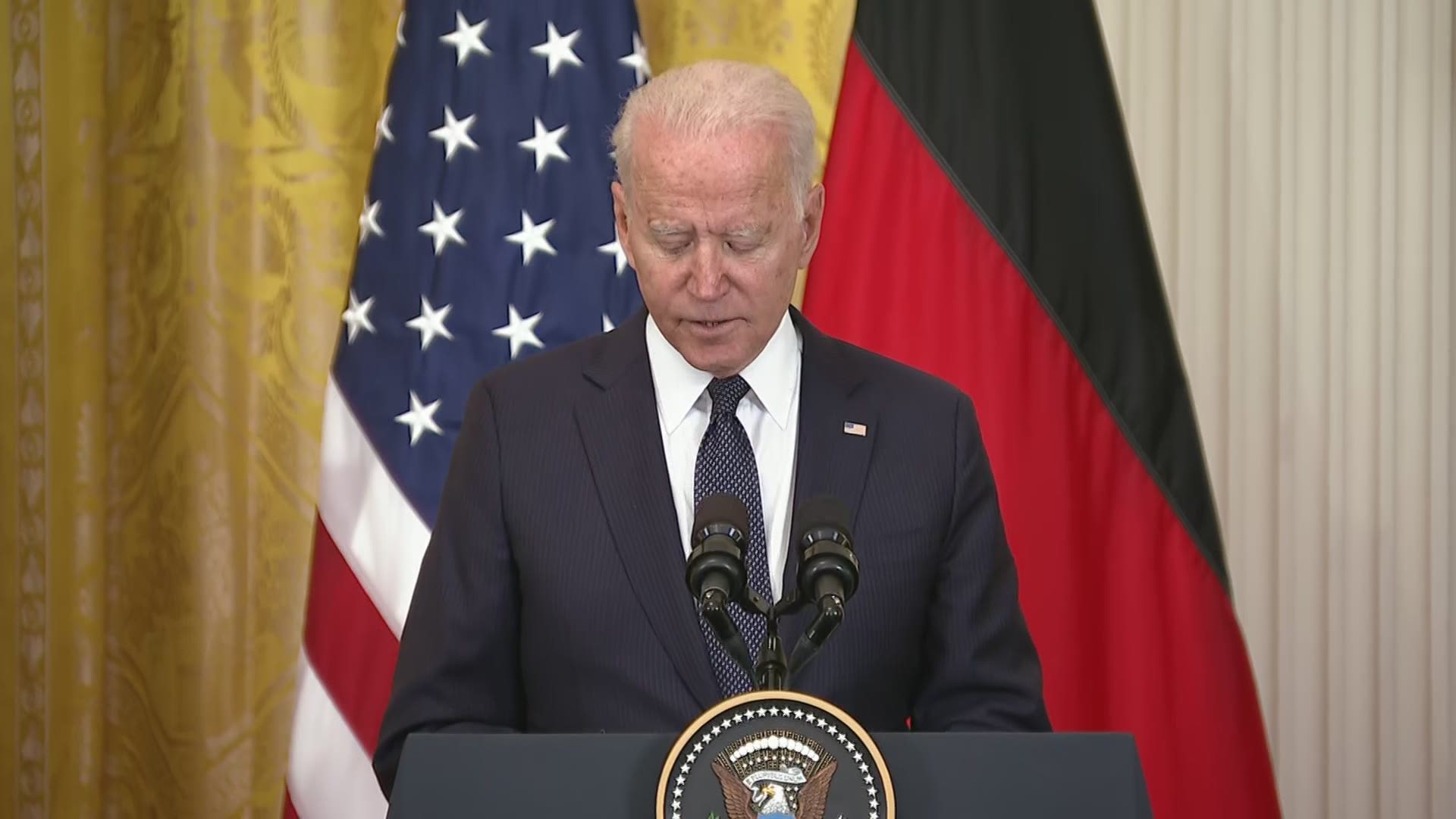 WASHINGTON — Welcoming Angela Merkel to the White House for a final time, President Joe Biden renewed his concerns to the German chancellor Thursday about a major, nearly complete Russia-to-Germany gas pipeline but said they agreed Russia must not be allowed to use energy as a weapon.

The two discussed — though made no apparent headway — on differences over the Nord Stream 2 pipeline during a largely friendly farewell visit for Merkel as she nears the end of a political career that has spanned four American presidencies.

“On a personal note, I must tell you I will miss seeing you at our summits,” Biden said as he stood by Merkel, the second-longest serving chancellor in Germany's history, at a late afternoon White House press conference. "I truly will.”

Merkel, who had a famously difficult relationship with former President Donald Trump, for her part showed hear ease and familiarity with Biden, who has long been fixture in international politics, repeatedly referring to him as "Dear Joe.”

But their personal warmth notwithstanding, the U.S.-German relationship is now at a pivot point as Merkel, who is not seeking another term in September elections, nears her departure from office. There are concerns on both sides about how the two nations will negotiate growing disagreements.

The United States has long argued that the Nord Stream 2 project will threaten European energy security by increasing the continent’s reliance on Russian gas and allowing Russia to exert political pressure on vulnerable Eastern and Central European nations, particularly Ukraine. But Biden recently waived sanctions against German entities involved in the project, a move that angered many in Congress.

Sen. Marco Rubio, a Florida Republican, in a letter to Biden on Thursday ahead of the leaders' meeting raised concerns that the pipeline is already having an economic impact on U.S. ally Ukraine. Rubio said Gazprom, the company that operates Nord Stream 2, “has already started to reduce its use of pipelines in Ukraine” as the new gas pipeline nears completion.

“I urge you to convey to Chancellor Merkel that there is broad bipartisan support for preventing the completion of yet another pipeline that bypasses Ukraine,” Rubio wrote to Biden. “I further call on you to press Chancellor Merkel to support Ukraine against Russia’s aggression.”

Merkel sought to downplay the differences, and to stress that the pipeline was in addition to — not meant to displace — Ukrainian pipelines.

"Our idea is and remains that Ukraine remains a transit country for natural gas, that Ukraine just as any other country in the world has a right to territorial sovereignty,” Merkel said. She added that Germany stood ready to react to Moscow “should Russia not respect this right of Ukraine that it has as a transit country.”

Merkel also raised concerns about COVID-19 travel restrictions that prevent most Europeans from traveling to the U.S.

Biden said he had brought in the head of his coronavirus task force to discuss the issue and that he expected to be able to offer a more definitive answer “within the next seven days” about when the restrictions might be eased.

Merkel started her day with a working breakfast with Vice President Kamala Harris, and Harris' office said the two had a “very candid discussion."

Back home in Germany, Merkel's country and neighboring Belgium dealt with the aftermath of heavy flooding that left more than 30 people dead and dozens missing.

“My sympathy goes to the relatives and of the dead and missing,” she said.

Officials in Washington and elsewhere are wondering what course Germany might take after the September vote.

Merkel's Christian Democratic Union is leading in polls, but the environmentalist Greens and the center-left Social Democrats are also vying to lead a future government. While the three parties differ in many policy areas, all are committed to a strong trans-Atlantic relationship.

Germany has strong trade ties with China but has also been critical of Beijing's human rights record. Merkel is keen to avoid a situation in which Germany, or the European Union, might be forced to choose sides between China and the United States.

Merkel has insisted on the need to cooperate with China on global issues such as climate change and the coronavirus pandemic, even while then-President Trump was accusing Beijing of having started it the pandemic.

The humanitarian group Doctors Without Borders urged Biden to lean on Merkel to drop her opposition to proposals for suspending vaccine patents. Merkel, a trained scientist, has argued that lifting the patents wouldn't be effective and could harm future research and development efforts.

A group of Democratic lawmakers called on Germany to drop its “blockade” of a COVID-19-related waiver of intellectual property rights under global trade rules. Such a waiver, the lawmakers argued, would help scale production of effective vaccines around the world.

Credit: AP
in this file photo dated Thursday, April 22, 2021, German Chancellor Angela Merkel, front right, attends a virtual international climate summit with US President Joe Biden, seen on screen left, in Berlin, Germany. Merkel on Wednesday July 14, 2021, is bound for America, for meetings on Thursday with US President Biden on what is likely to be her last official visit. (Kay Nietfeld/Pool via AP FILE)

The Biden administration has expressed support for the waiver being discussed at the World Trade Organization, but White House officials did not anticipate differences being resolved during Merkel's visit.

While there are points of tension, Biden seemed eager to offer Merkel a proper farewell.

He's hosting Merkel and her husband, as well as an array of lawmakers and administration officials, current and past, at the White House for a dinner Thursday evening. The guest list includes Secretary of State Antony Blinken, as well as two of his predecessors — Hillary Clinton and Colin Powell.

The Republican Senate and House leaders, Mitch McConnell and Kevin McCarthy, will also be in attendance along with other top U.S. and German officials.

Earlier Thursday, Harris hosted Merkel for breakfast at her residence on the grounds of the U.S. Naval Observatory, commending her for her “extraordinary career." Merkel in turn noted the historic nature of the Harris vice presidency.

“I can only say that I’m delighted, too, for this opportunity here to meet the first madam vice president of the United States of America," Merkel said before the two leaders stepped into a residence to talk over a breakfast of Gruyère soufflé, seasonal fruit, and charcuterie.

Also Thursday, Merkel received an honorary doctorate, her 18th, from Johns Hopkins University and spoke at the university’s School of Advanced International Studies.

Jordans reported from Berlin and Madhani from Chicago.