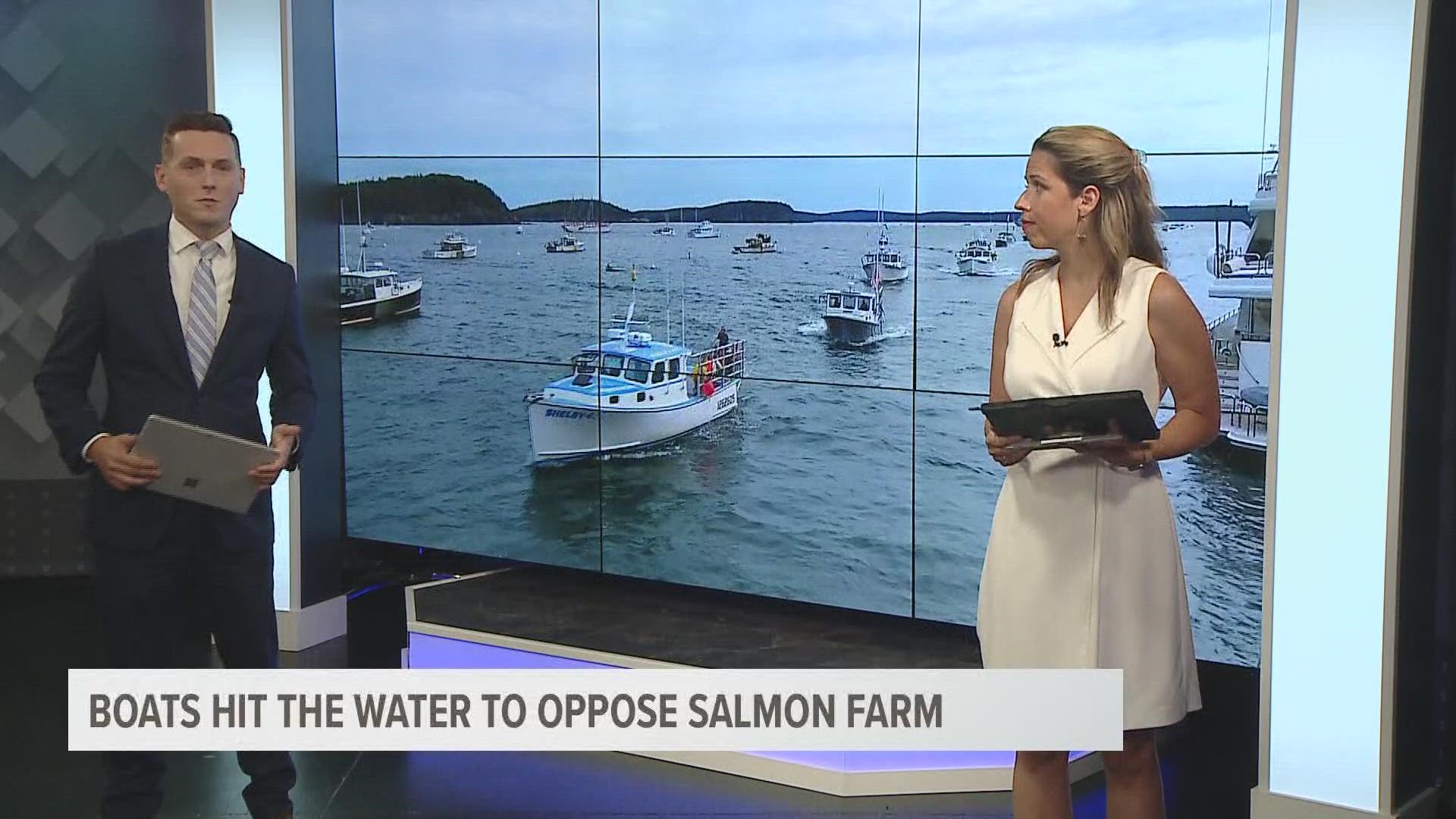 The proposal, currently in a state-level permitting process with both the Maine Department of Marine Resources and Maine Department of Environmental Protection, would allow American Aquafarms, a Norwegian-backed company, to place large commercial salmon-raising operation in Frenchman Bay, which borders the park and nearby towns like Bar Harbor.

The farm will be 120 acres in size, according to Maine Public.

American Aquafarms says the salmon would be in closed pens and would represent a $250 million investment in the region that creates 100 jobs and includes a redevelopment of an industrial waterfront area in nearby Gouldsboro.

But opponents of the project, like those who were part of the protest, say they're concerned about light pollution, noise pollution, environmental risks and tourists finding the farm unsightly.

Zach Piper, a lobsterman in Hancock, said in an interview Monday he was "very worried" about the project negatively impacting the area's lobster fishery and that the project could be unpleasant to look at.

"It's part of what makes Maine Maine," he said of the lack of development and structures in the area of the bay where the farm would be located.

Crystal Canney, the executive director of a group called Protect Maine's Fishing Heritage that advocates for ending the salmon farm project, shares those concerns and fears that a dent in tourism or fishermen will do more to hurt the regional economy than help it.

"The community survives on those natural resources, the tourism dollars that are brought in," she said, adding that, in her view, "this could be devastating to the economy."

Meanwhile, Thoman Brennan, a director of Project Development for American Aquafarms, said he believes there is a chance tourists visiting Cadillac Mountain who would see the salmon farm may actually be proud of the technology it would utilize and become curious about the development.

"We have an opportunity to be a leader here," he said, adding that he believes solutions to mitigate light and noise pollution could be "engineered" and he would like the protesters "to be willing to talk to me."

As for the risks associated with a potential unforeseen nitrogen discharge causing an algae bloom in the bay or disease stemming from the farm, Brennan replied that "there's always a risk associated with everything."

"We're going to absolutely minimize risk but there's also a risk to importing 90% of the seafood that comes into this country … the loading on those logistical miles is astounding," he said.

According to Barry Costa-Pierce, a professor of ocean systems at the University of New England, "there's always going to be a risk of nitrogen discharge," even if American Aquafarms uses innovative technology to try and avoid that, which he expects they would.

A discharge like that would have a significant negative impact on ecosystems in the bay.

Costa-Pierce said that there are numerous benefits to salmon farming and it has been successful in other places in Maine, though much is still being learned about it because its prevalence in the United States only spans about 40-50 years.

He believes that studying events like mass die-offs remains an important part of making salmon farming less risky and a very viable option for "producing large-scale food for the world."

However, Costa-Pierce noted that Frenchman Bay's location, the way it provides cultural and economic value as both a lobstering ground and a tourist hub, make America Aquafarms' plans more controversial than they might otherwise be, and that is a very much a factor in the debate on the project's location.

"The company has chosen an area where the public is very concerned about its existing uses and it's highly unlikely those concerns will go away even if they do get the permits," he said.

A review is ongoing, according to Maine's Department of Marine Resources, one of the agencies looking at American Aquafarms' final application

An agency's spokesman, Jeff Nichols, said that once that review and application are complete, the department will conduct a review of the salmon farm site and schedule a public hearing about the project.

Nichols said he believes that "at this point, given the schedules," the department does not "anticipate a public hearing happening until next year." 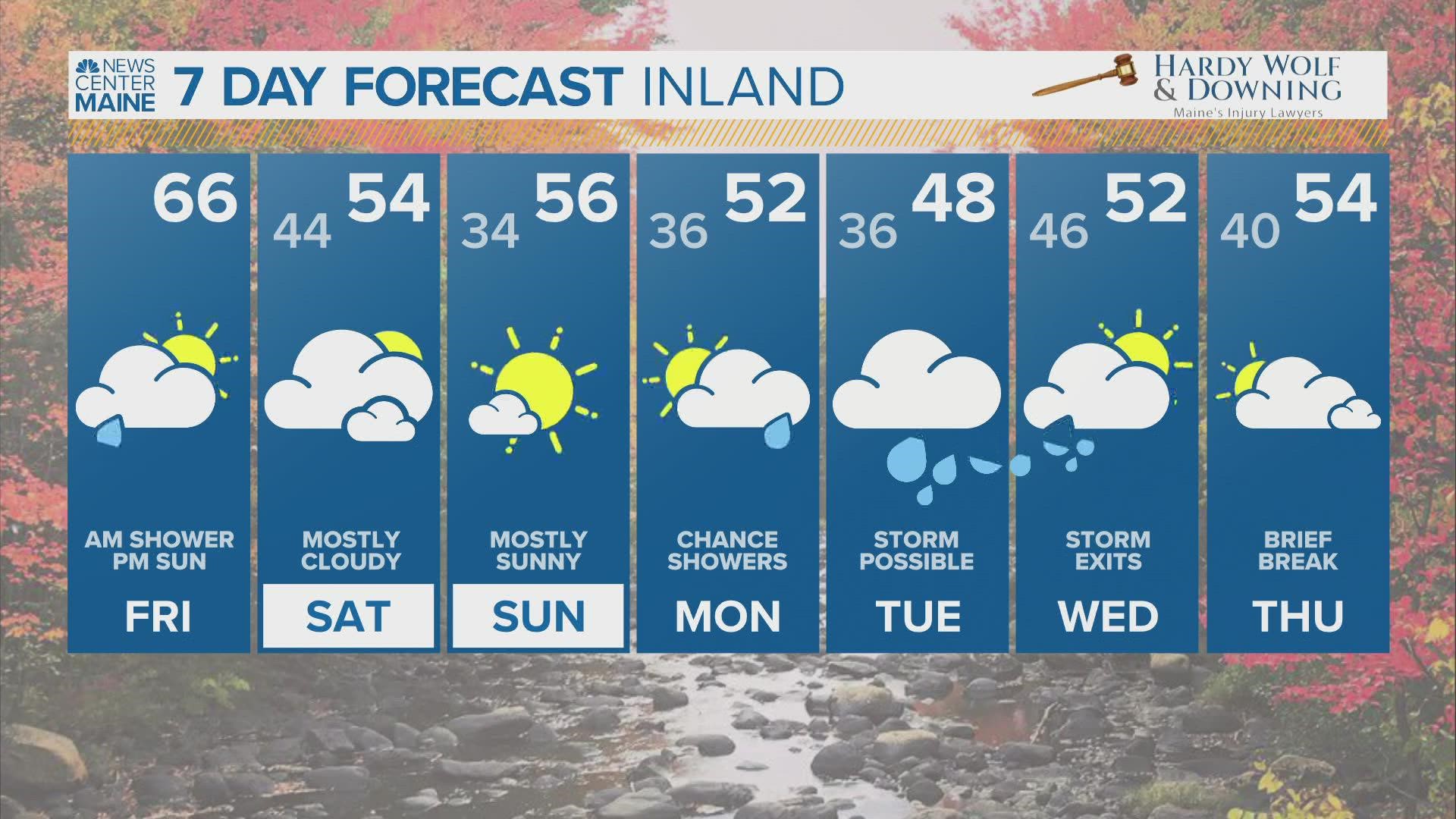