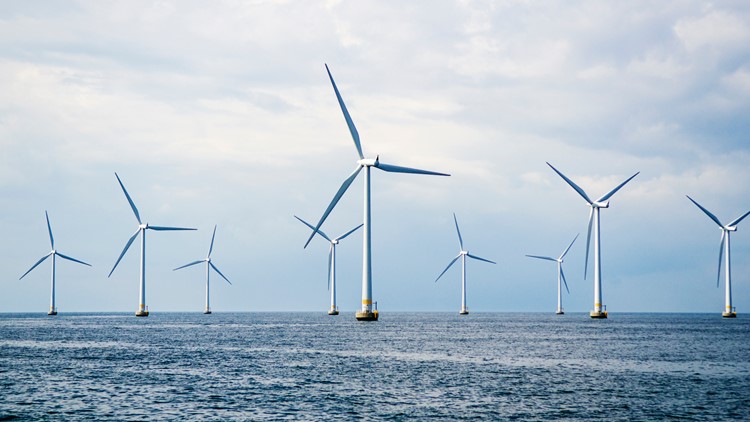 BOSTON — The governors of five East Coast states are urging federal regulators not to put any additional roadblocks in the way of the country's nascent offshore wind industry.

The group, including Republican Massachusetts Gov. Charlie Baker, said they're disappointed by a recent decision to delay final permitting of the planned 84-turbine Vineyard Wind project south of Martha's Vineyard.

The group urged federal overseers to give the project a green light by next March saying further delay would have "negative impacts on this project, offshore wind development along the east coast and the further expansion of American jobs that support this industry."

An Interior Department spokeswoman said the federal Bureau of Ocean Energy Management is working to develop a new permitting timeline for the project.

In the letter — also signed by Connecticut Gov. Ned Lamont, Maine Gov. Janet Mills and Virginia Gov. Ralph Northam, all Democrats, and New Hampshire Gov. Chris Sununu, a Republican — the governors note Vineyard Wind has been delayed due to a decision by the federal government to undertake an expanded "cumulative impacts" review sparked by greater interest in building offshore wind projects in the Atlantic Ocean.

"While we support assessing and mitigating impacts of large-scale offshore wind development, we are disappointed that this review has adversely affected the timeline for the Vineyard Wind Project," the group wrote. "Like other industries, it is critical that states and the federal government establish and maintain clear regulatory timelines so as to incentivize the necessary capital investment."

Baker told reporters Wednesday that he's talked to Bernhardt several times and was told he could get all the regulatory work that needs to be done on the Vineyard Wind project by March, 2020.

"He felt that the 2020 date, March 2020, was a date that they could achieve and that is the date that Vineyard Wind is assuming they're playing toward and they believe that they can make this happen within that framework," Baker said. "At this point, he's the regulator, he's the decision-maker — I'm taking him at his word on this."

Vineyard Wind has signed contracts to sell 800 megawatts of power a year to three Massachusetts electric utilities. The company had planned to begin construction later this year off the Massachusetts coast.

The company has said the wind farm would reduce Massachusetts' carbon emissions by over 1.6 million tons per year — the equivalent of removing 325,000 cars from state roads.