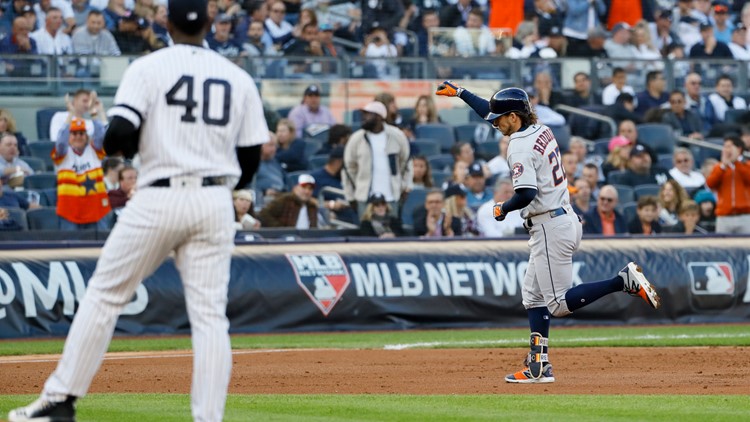 "You throw a baseball hard enough and hit somebody in the head when they're not looking, it could do some damage to the player, so it's definitely disrespectful and at the same time very unsafe," Reddick said.

Fans erupted after a replay review changed Edwin Encarnación's infield hit leading off the eighth to a groundout. Houston went on to take a 2-1 lead in the best-of-seven series.

Josh Reddick singles into the gap between first and second base to score David Ortiz while the later was on a rehab stint with the Portland Sea Dogs on July 24, 2008.
NEWS CENTER Maine

"I don't think fans realize when they do that that you could hit a player. You hit a baseball player with a baseball from the third deck, it's got a little bit of movement on it so it can definitely do some damage to you and it's frustrating to see as a player in the outfield," Reddick said. "I saw water bottles and like two baseballs. There were two souvenir baseballs thrown in center and left field. I got all the water bottles in right."

Reddick homered off Luis Severino in the second inning for a 2-0 lead. Fans directed insults at him when he went to right field.

"It's a matter of all kinds of different things here, but you're used to that for nine innings. Pretty standard," Reddick said. "They're all yelling at the same time, so it all kind of mumbles together."

Restless Yankees fans cheered when Luis Cessa hit Alex Bregman on the back with a 92 mph fastball in the ninth.