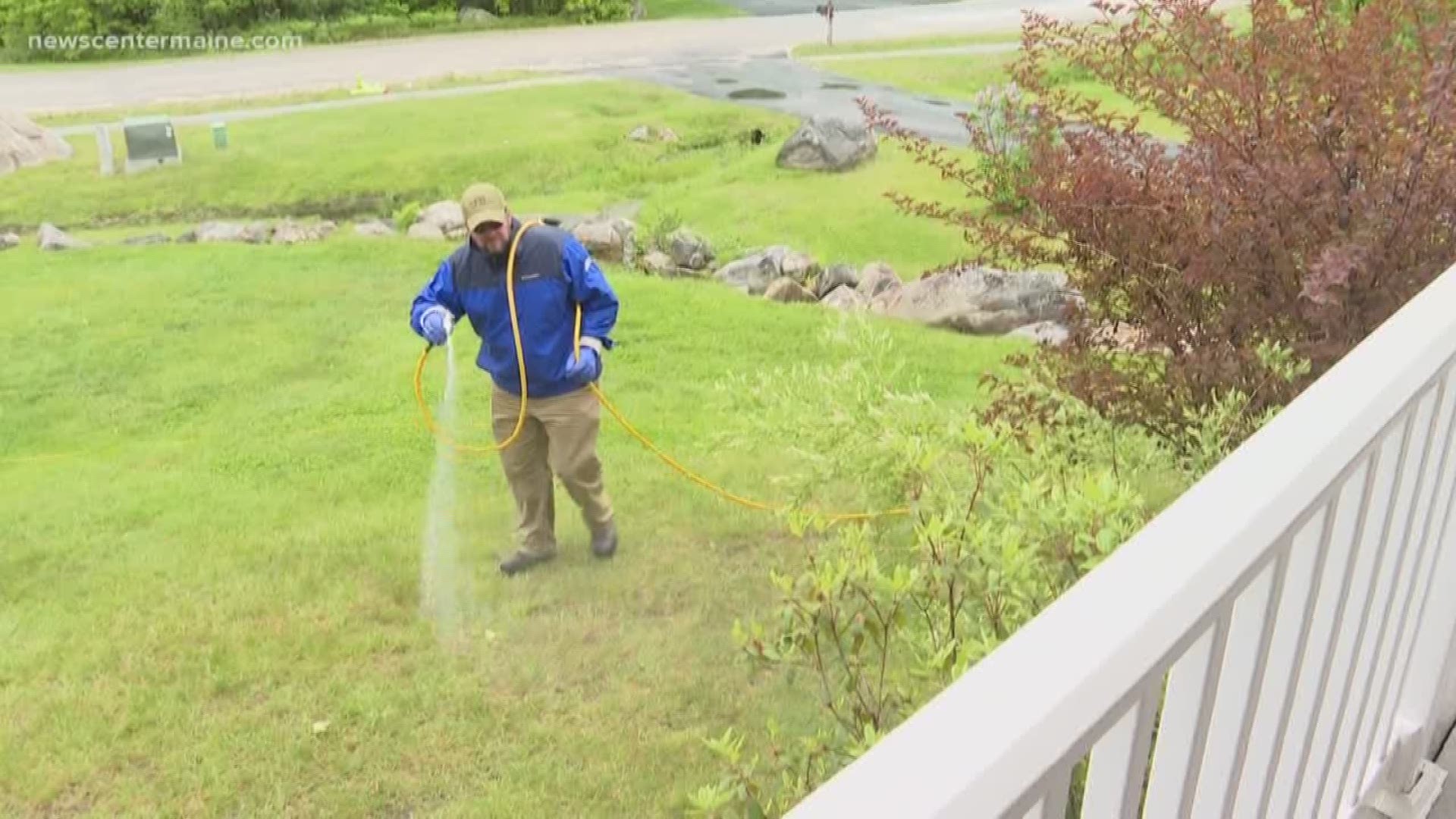 See below for part two of two

CUMBERLAND, Maine — With the explosion in the number of ticks and tick related illnesses like Lyme disease there is a small but silver lining: companies trying to help you survive are also popping up all over.

"I hadn't seen it through a least two baths and multiple diaper changes because it was so small," said Carrie Chognowski.

Chognowski remembers finding what looked like a piece of lint in her son Evan's belly button -- when he was a baby. That tiny fleck turned out to be a nymph, the late stage before it becomes an adult deer tick.

Tests determined the nymph had been attached to her son for several days. Evan went on a course of antibiotics, and fortunately didn't have any symptoms of Lyme disease. Chognowski believes her son may have been exposed while playing in the sandbox in the backyard, so she decided to take action.

"Seeing that tick on my 8-month-old baby was like so scary, I'd rather pay the money and have my property protected," Chognowski said.

Chognowski called it Mainely Ticks -- a company based in southern Maine that has been managing ticks on residential properties for 15 years. Bob Maurais is the co-founder of company.

"Most of the calls we get not surprisingly are from moms," Maurais said.

His company first evaluates the perimeter of a customer's yard to determine where pets and kids are picking up ticks.

"It's usually that leaf litter the interface between the lawn and wooded edge, that is usually the source of the ticks," Maurais said.

Lately, Maurias says it's a challenge to keep up with the demand from customers who want to protect their families.

The company treats lawns with a commonly used synthetic pesticide called bifenthrin. Pest management technicians use one tablespoon of the pesticide per 20 gallons of water. The company recommend two treatments a year in the spring and the fall. Other customers opt to get their yards treated every six to eight weeks.

Maurius also provides homeowners with information how to spot a deer ticks, what diseases they carry -- and the importance of regular tick checks and using treating clothes with permetherin and allowing them to dry before putting them on.

The company also gives detailed pictures of ticks to help homeowners spot the difference. Both deer and wood ticks have U-shaped backs, but the big difference is in the coloring of their lower back region. The female deer tick's lower back is red, while a female wood tick has a black lower back.

PITTSFIELD, Maine — "I get messages from people who are looking for help with either a tick bite or Lyme disease," said Phil Hendricks.

Hendricks sells products infused with CBD including coffee, teas. lotions, creams, tinctures and vape pens. His customers include people dealing with chronic pain, cancer and Lyme. A disease that robbed him of years of his life. The symptoms started in 2004 started when he was a humanities teacher and varsity baseball coach both at Maine Central Institute, an independent high school in Pittsfield.

"I can remember standing in my classroom and all of sudden what I am teaching? What was I walking about? I couldn't remember kids names anymore," Hendricks said.

Hendricks also suffered from debilitating headaches, insomnia, sweats and chills. Things got so bad he had to give up teaching.

"I was a baseball coach, I was always around kids, teaching and coaching I lost that piece of myself," Hendricks said.

In 2012, he was diagnosed with a tick-borne disease called Bartonella. Despite undergoing treatment -- he had extreme anxiety until he tried a vape pen infused with CBD. CBD is derived from hemp, but unlike marijuana, it won't make you high. The compound is being added to just about everything -- gummies, tea, soft drinks, and even pet treats.

"I started using that vape pen and it really changed my life," he said.

In 10 minutes, his anxiety was gone. He started sleeping better, the sweats were starting to go away.

Hendricks then started selling CBD vape pens from a distributor in California out of the back of his car. Along the way he shared his personal story of how CBD changed his life.

"I find more and more people can relate to the story, they either have Lyme disease or know someone who has Lyme disease," Hendricks said.

While Hendricks still misses teaching, running a company that aims to help other patients get better  -- is helping him heal.

"Somebody told me the other day, you know, you are still teaching, Phil," he said.

Information from the CDC on recommended treatments for Lyme disease.