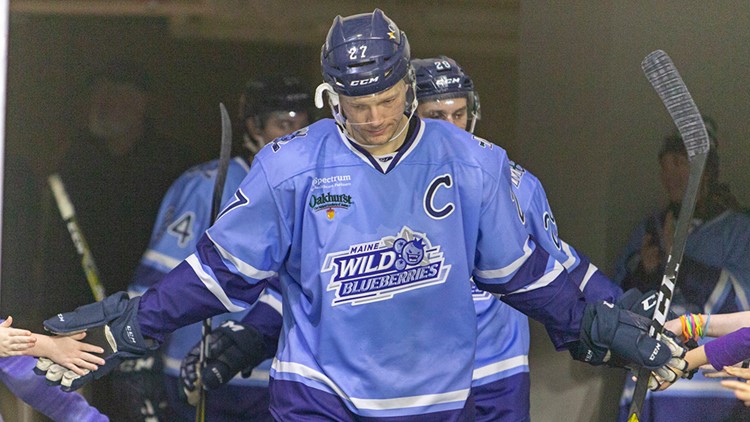 Photo by: Maine Mariners
The Maine Mariners assumed an alternate identity as the Wild Blueberries for their game on March 9, 2019 in Portland against the South Carolina Stingrays.

LAS VEGAS — The benefits of blueberries go beyond antioxidants for the Maine Mariners.

For rebranding itself as the Wild Blueberries for one game, the team took home an award for Theme Night of the Year at the ECHL Summer Meetings in Las Vegas on Thursday, June 20.

In a presentation on June 20, 2019 in Las Vegas, the ECHL award for Theme Night of the Year went to the Maine Mariners for their one-game name change to the Wild Blueberries.
Maine Mariners

The Mariners made the switch on March 9 for their home game in Portland against the South Carolina Stingrays. Players wore custom uniforms with a Wild Blueberries logo designed specially for the occasion.

Mariners management conceived the event as "what could have been" if voting for the team name had gone differently. Fans chose from a list of five finalists that also included the Puffins, the Lumberjacks and the Watchmen. Nostalgia for the previous Mariners franchise won out, with the Wild Blueberries finishing a strong second.

Big Room Studios designed the logo used by the Maine Mariners for their one-time only rebranding as the Wild Blueberries.
Maine Mariners

Behind the fun of the name change, the event recognized the importance of wild blueberries as one of Maine's signature crops.

Other local teams are putting their own spin on the stunt. On June 21, the Portland Sea Dogs will take the field dressed in brown and white uniforms as the Maine Whoopie Pies.

The Mariners will kick off their second season with their familiar name and logo on October 11 at home against the Adirondack Thunder.