It has been nearly 22 years since Maine State Police has lost one of its members in the line of duty. 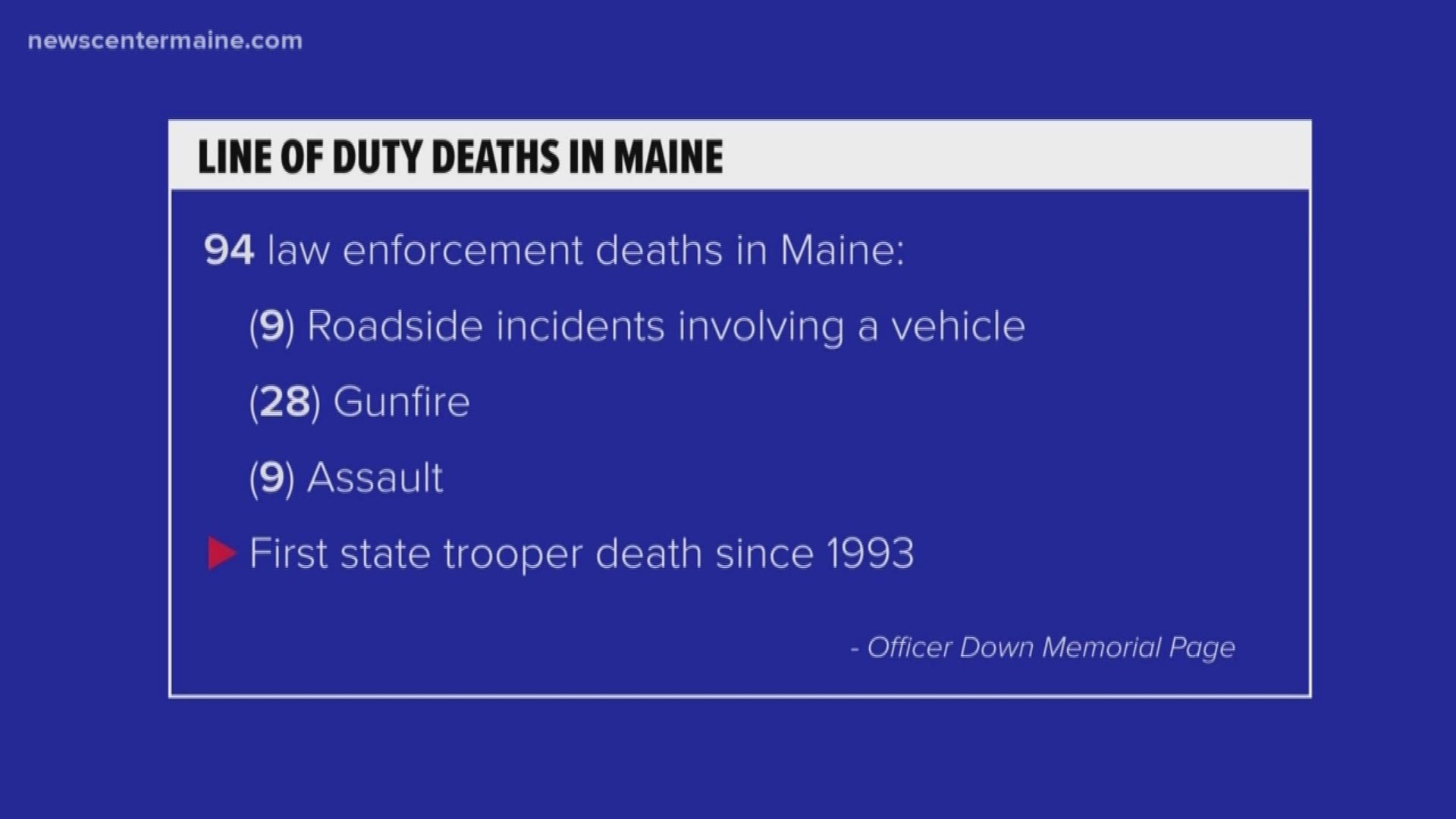 AUGUSTA, Maine — The line of duty death involving a Maine State Police detective on Wednesday was the agency's 12th in its nearly 100-year history.

Detective Ben Campbell, 31, was killed after a freak incident in which a tractor-trailer truck's tire struck him while he was outside his cruiser helping a driver.

Campbell joined the force in 2012, was promoted to detective in 2016 and eventually assigned to the Polygraph Unit. He had a wife and a son.

Of the 12 deaths, listed on both the Maine Department of Public Safety section of maine.gov, as well as Officer Down Memorial Page, three were motorcycle crashes before 1929.

Three others were car crashes – two one-car crashes, one two-car crash – a pair were heart attack-related, and another two involved shootings.

Only one other involved a vehicle, or part of, striking a trooper: Trooper Thomas Merry was struck and killed by a car in 1980 during a high-speed chase.

Detective Strange died of heart problems on October 17, 1997, days after arresting a violent drunk driver who had kicked and punched him in the chest in the town of Linneus. He had joined the State Police in 1994 following a teaching career and was promoted to Detective weeks before his death.

Trooper Griffith was killed on April 15, 1996 when a second vehicle in Warren struck his cruiser, as the Trooper was attempting to make a U-turn to pursue a speeding car. Griffith had joined the State Police in 1986.

Trooper Parola was killed on November 13, 1994 when his cruiser crashed in Sidney. He was a member of the Tactical Team and was responding to a domestic violence call at the time. Parola joined the State Police in 1989.

Lieutenant Goupil was the commander of the Maine State Police Academy at the time of his death. He suffered a fatal heart attach during a training run in Waterville. He started service in October of 1970.

Detective Landry was shot to death on March 31, 1989 while investigating a child abuse complaint in Leeds. The gunman also killed a woman who had been talking to Detective Landry, before turning the gun on himself. Landry joined the State Police in 1976 and was promoted to Detective in 1988.

Trooper Veilleux was killed on June 17, 1986 when he lost control of his cruiser and it overturned in Dayton. He had graduated from the State Police Academy the previous month.

Trooper Merry was killed on July 12, 1980 in Palmyra when struck by a car involved in a high-speed chase. Merry had parked his cruiser as part of a roadblock and was attempting to seek safe cover when struck by the fleeing car. He joined the State Police in 1977.

Trooper Black was shot to death on July 9, 1964 outside the Maine National Bank in South Berwick during an armed robbery. He joined the department in 1958.

Trooper Wing was killed when his motorcycle collided with an oil truck in Millinocket on August 19, 1928. He had joined the State Police two months earlier.

Trooper Foster was killed when his motorcycle struck a horse hauling a load of hay. The accident occurred in Belfast on August 30, 1925. He had joined the State Highway Patrol in 1924.

Officer Gooch was killed when he lost control of his motorcycle in Mattawamkeag on August 9, 1924. He had joined the State Highway Patrol the month earlier.