We're hot, then we're cold: a mild Saturday leads to a wintry Sunday in Maine

We're still a couple days away, but Sunday looks messy...snow, ice, and rain all on the table after near record warmth. 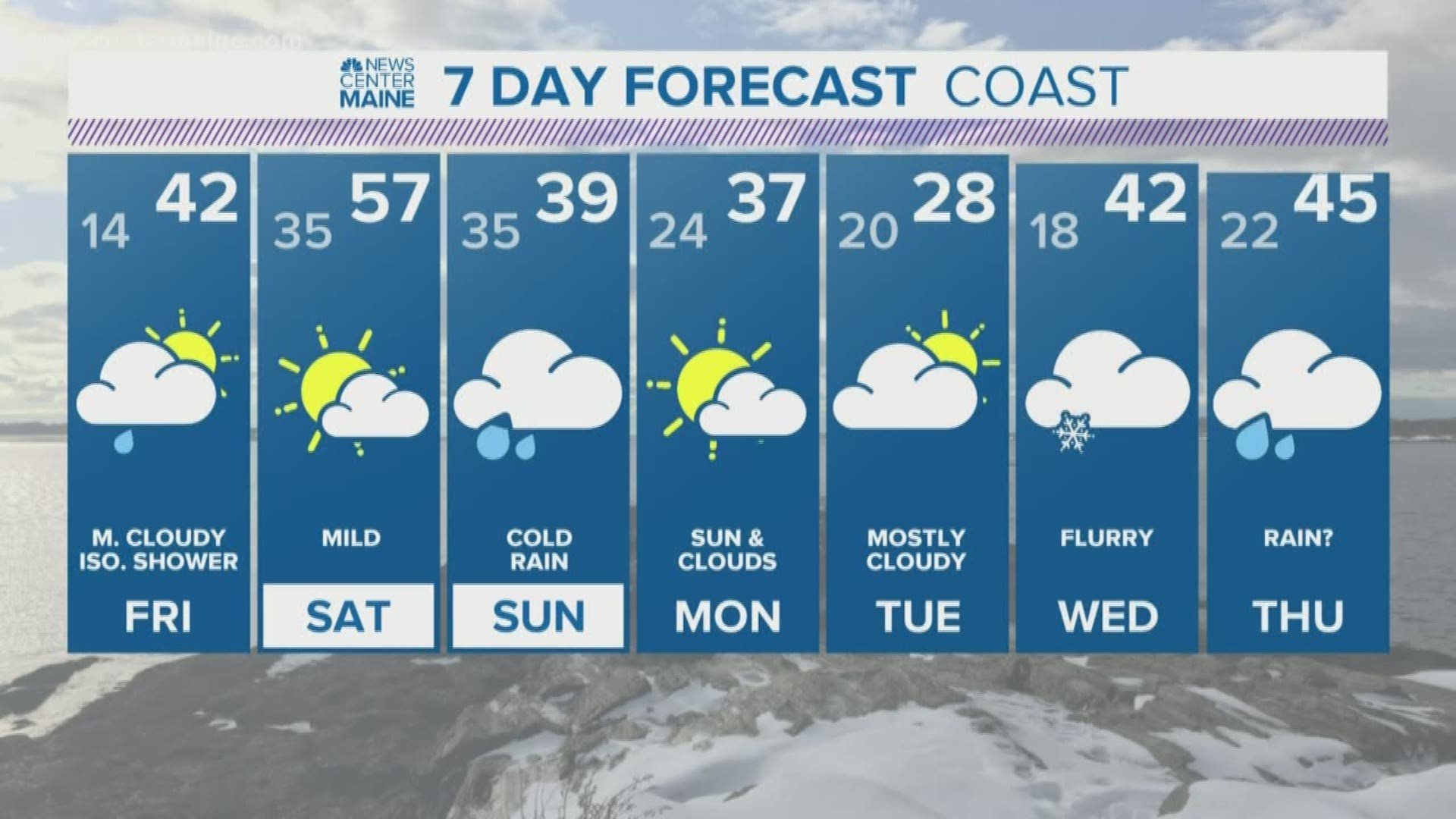 MAINE, USA — The difference between Saturday and Sunday is going to be pretty staggering for most Mainers.

On Saturday, you might be out and about in shorts and a sweatshirt. With a little bit of sun possible along the coast, there will be someone out in shorts and a T-shirt. I guarantee it. After all, 50s in January will feel like a heat wave! (Wind chills are still below zero through some of Maine as I write this...)

Sunday is going to be just about the opposite. Cold air drains in from the north. Surface temperatures drop quickly...snow starts up in northern Maine. With some warm air above our heads through the central part of the state, icing becomes a concern. The area most likely to see some impacts from icing is Fryeburg to Lewiston to Augusta to Bangor. Let's break it down.

Yup. That's about it for Saturday. A quick burst of warmth is on the way. Any showers that move through will be plain old rain, all the way through The County and into Canada. The best chance for showers will be through central and northern Maine.

These forecast highs are pretty impressive. Some areas in southern Maine will be 20 to 30 degrees above average! Keith mentioned it yesterday, and I happen to agree...if there's some sun in York county, a temperature reading of 60 degrees is definitely possible. Records could be in jeopardy.

Credit: NEWS CENTER Maine
Records are in jeopardy this weekend.

While this will be an impressive intrusion of warmth, don't let your guard down. Things change quickly on Sunday.

RELATED: Maine weather in 2019 by the numbers

An Arctic high sets up in Canada as a low forms over the Great Lakes. Cold air drains into Maine. Warm air ends up on top of this...the perfect recipe for some icing.

Wind comes from the north and northeast for the lowest part of the atmosphere. This allows the denser cold air to undercut the warm air. Temperatures will drop quickly as this colder air settles in.

The thing we need to watch is how deep this cold layer is. More cold air will result in more sleet than freezing rain. A very shallow layer of cold air with warm air right above it would favor a bit more freezing rain over sleet.

Credit: NEWS CENTER Maine
This shows the differences between the precip types.

So, Slifer, what should I expect in my backyard?

This map outlines the most likely areas to see icing, snow, and plain old rain.

Reminder: this map could have some small tweaks over the next couple days.

The areas most likely to see the biggest impact from icing are in western and central Maine. Northern Maine ends up with mostly snow, while coastal areas see minimal icing and rain.

This is not going to be a repeat of our infamous ice storms (looking at you, '98) since the system itself is pretty fast and it doesn't look too windy. We clear out the entire state late Sunday and expect quieter conditions heading into Monday.

Still, power outages are absolutely a possibility. Ice on power lines and tree limbs will add extra weight and could definitely cause some issues.

Stick with us over the next couple days...we'll have more forecast info as we get closer.