The worst of the storm will hit Tuesday morning. All of Maine will start as snow, but many areas will see an icy mix. 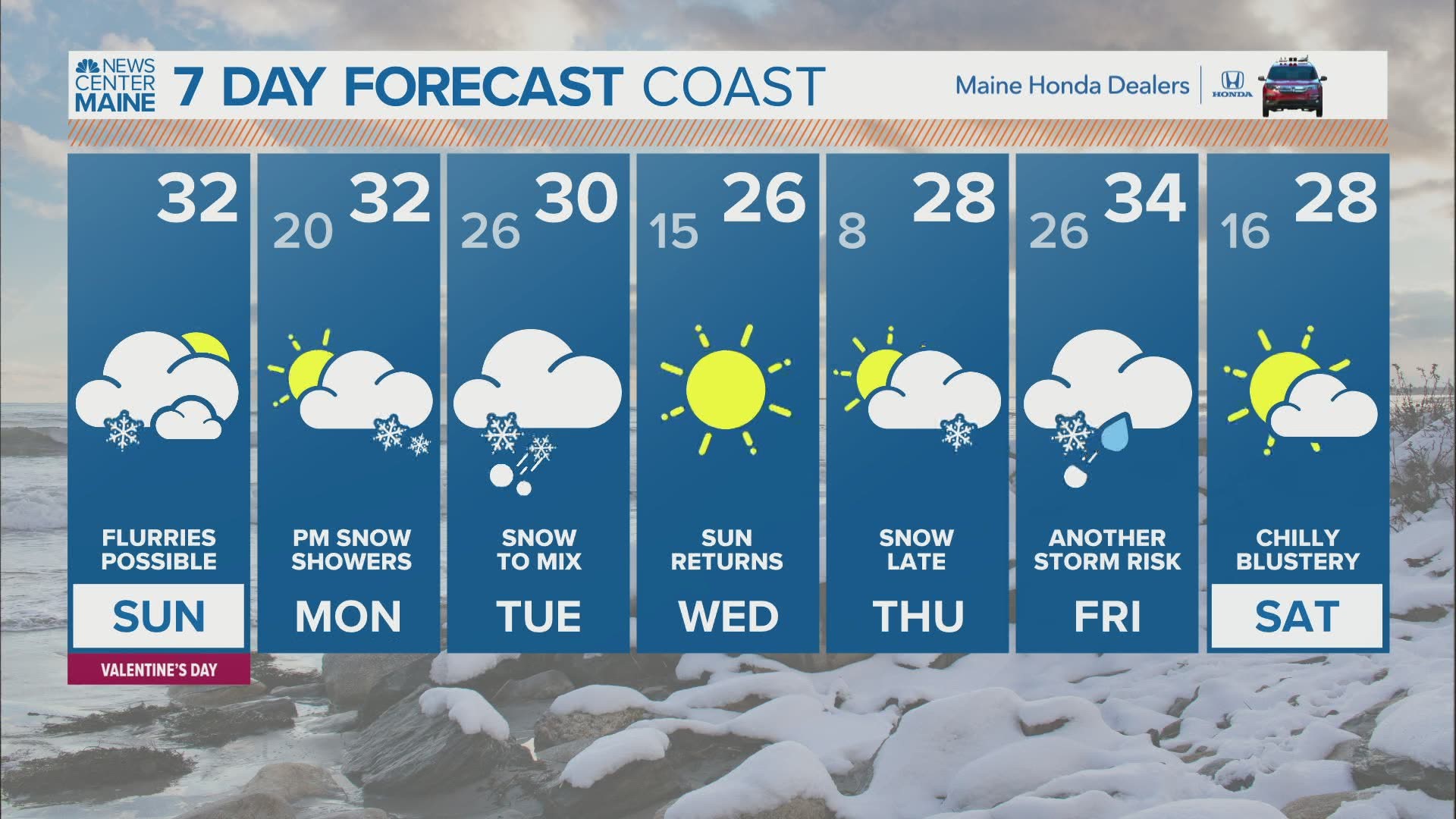 MAINE, USA — Most of our storms recently have been largely snow, but that's about to change on Tuesday. Sleet and freezing rain are going to be in the mix for many of us.

A storm that's bringing snow to Texas this weekend will arrive here late Monday night. Everyone will start as snow. The storm center will likely track near or even just south of us, keeping cold air locked in at the ground, where temperatures should remain below freezing the entire time.

But about 3,000 to 9,000 feet above the ground, there will be a layer of warmer air moving in during Tuesday morning.  This will melt snowflakes into raindrops.  Then, these drops should refreeze into ice pellets (sleet) before hitting the ground.  The "sounding" below shows how temperatures change from the ground up. This type of look suggests sleet.

If that layer of warm air grows larger, then freezing rain would come into the picture.

A good saying to remember is "sleet pings, freezing rain clings."  You can thank Jess for teaching me that one.  Freezing rain freezes on contact with the ground, coating everything in ice.  Sleet is an ice pellet that's already frozen when it hits the ground.

It's possible there's a period of freezing rain Tuesday especially near the coast - but right now I'm thinking the main precipitation types will be snow and sleet.

Ahead of the storm Monday afternoon, scattered snow showers could drop minor accumulations (coating-2") in spots.  Something to keep in mind if you have to be out at that time - but this is not the main storm.  It may require some crews to treat the roads, especially in western Maine.

There should be a lull for a while Monday evening with clouds and flurries.

Steadier snow moves in between midnight and 4 a.m. from west to east.

Early Tuesday morning, it should be snowing statewide.

During Tuesday morning, snow will change to sleet in many areas. By 8 a.m., I think that changeover will happen in much of southern and Midcoast Maine.

Some freezing rain may start to mix in too, especially on the coast of York County.

By noon, the steady precipitation is ending in York County and in Portland. Off and on light sleet or freezing rain will continue into the afternoon.

In a lot of central Maine, there will be a mix of snow, sleet or freezing rain. All snow will become confined to the far north.

It will be much easier getting around later in the afternoon, assuming roads have been treated.

Temperatures will start to drop, so any untreated areas will remain icy.

By 5 p.m., only lingering snow showers are expected, with steady snow confined to the Central Highlands and northern Maine.

Sleet or freezing rain will obviously cut down on snow totals.  The earlier the changeover happens, the less snow accumulation there will be, but the icier it will get.

Since we're still two days out, there will likely be some changes, but here's my thinking now.