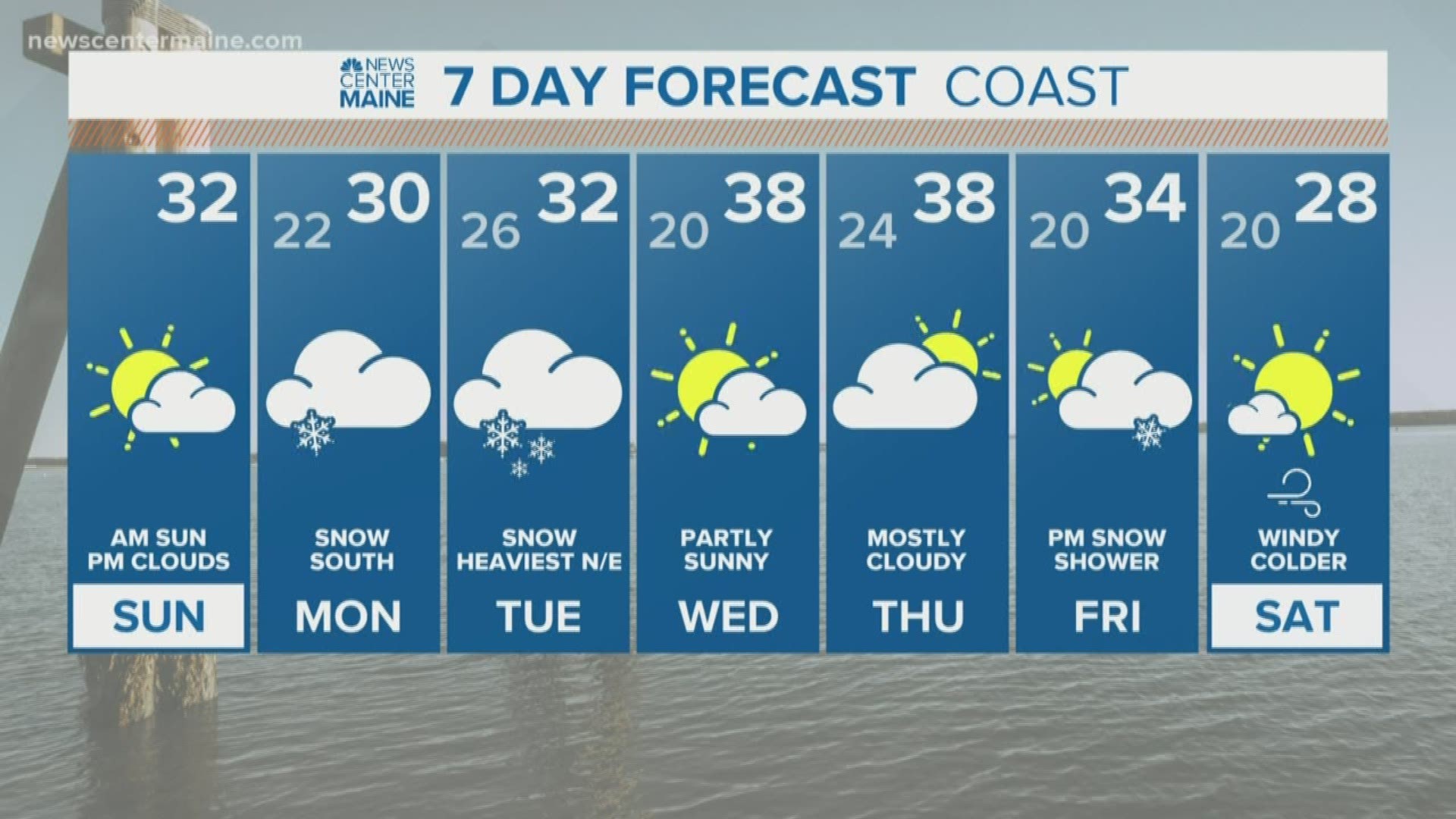 MAINE, USA — The storm is approaching, and if it seems like a lot to digest, you're not alone. It's coming in two parts, and that's what makes it difficult to plan around.

If you want to see Ryan's detailed discussion, scroll to the bottom for his YouTube LIVE breaking down the storm in details.

On to the written forecast.

Second part: Later Monday into Tuesday, as a coastal low develops offshore and moves north. This is what will lift the precipitation northward into central and northern Maine, but it takes a while to get going there.

But it may take until Monday evening for any snow to make it farther north, into places like Waterville and Bangor.

The snow "start time" will look something like this. Yeah, it's moving north at a snail's pace:

Light snow moves into southwestern Maine (York, Cumberland, Oxford counties) this evening. I'd say the first flakes are possible near the New Hampshire border around 6 p.m. and closer to 8 p.m. in Portland.

It will be cold, so where it does snow, it'll coat the roads quickly.

Central and northern Maine stay dry overnight. The morning commute will be most impacted from Portland south. School delays and/or cancellations are possible in Cumberland and York counties Monday morning.

We'll get a bit of a lull during the day Monday before a coastal storm develops, bringing another round of snow from south to north starting Monday afternoon and night.

When the precipitation lightens up, it may be some sleet or "snizzle" (like drizzle, but snow).

Snow starts to pick up again Monday evening. Some mixing with sleet possible near the coast and likely Downeast.

Tuesday morning is now looking like the height of the storm for much of the state. Heaiver snowfall bands could drop 1" per hour in spots, especially in central Maine. School delays and cancellations are looking pretty likely to me on Tuesday.

Some mixing with ice and rain is likely over Downeast, limiting snow totals but making it slippery.

Everything starts to wrap up Tuesday afternoon from southwest to northeast, but it'll take until Tuesday night to end in northern Maine.

Got it? Thanks for reading this far. You made it!

Given it's such a long-duration storm, our snowfall forecast is on the low side compared to some of the computer models. That's taking into account the compaction that happens over time and the mixing with some sleet that's possible near the coast and Downeast.

I'm keeping 6-10" of snow in Cumberland, York and southern Oxford counties. A few inches of that will be on the ground by Monday morning. The rest falls with the second round.

Since most of the snow in northern and eastern Maine won't fall until Tuesday, we might have to tweak the snow amounts a bit there, between now and then. It wouldn't shock me if some totals top 6" in the Central Highlands.

Check in with Mike tonight for an update. Todd and I will be in Monday with more.

Have a nice Sunday.