By morning, much of the state will be changing to sleet or freezing rain. 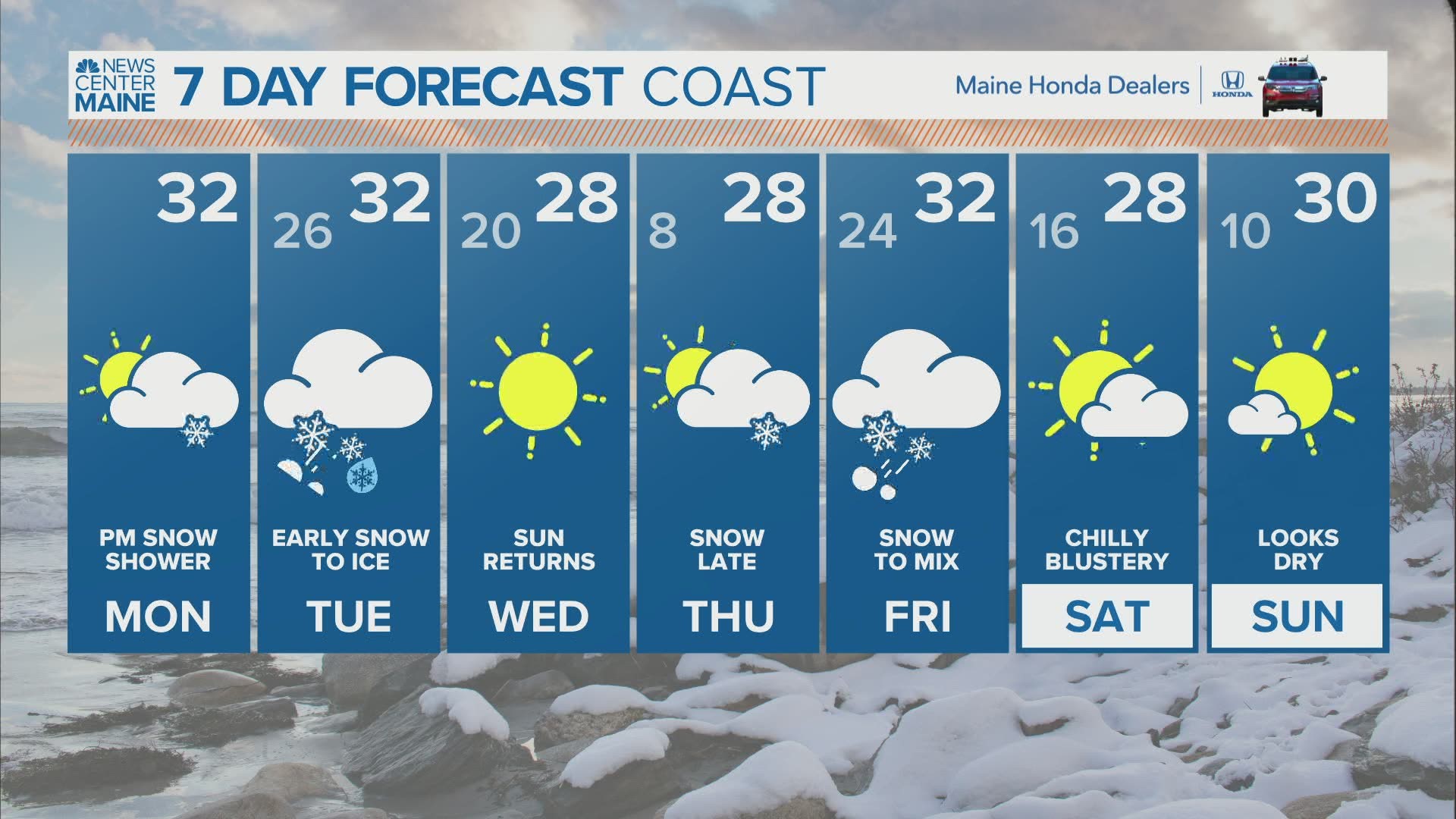 MAINE, USA — Tuesday's storm continues to look pretty messy, with snow and ice for much of the state.

A storm that's bringing snow to Texas and Louisiana arrives here after midnight tonight. Everyone will start as snow. The storm center will likely track near or even just south of us, keeping cold air locked in at the ground, where temperatures should remain below freezing much of the storm.

But about 2,500 feet above the ground, there will be a layer of warmer air moving in during Tuesday morning.  This will melt snowflakes into raindrops.  Then, these drops should refreeze into ice pellets (sleet) before hitting the ground.  The "sounding" below shows how temperatures change from the ground up. This type of look suggests sleet, but as the warm layer aloft gets thicker, freezing rain will be an issue too.

A good saying to remember is "sleet pings, freezing rain clings."  You can thank Jess for teaching me that one.  Freezing rain freezes on contact with the ground, coating everything in ice.  Sleet is an ice pellet that's already frozen when it hits the ground.

Here's an overview of the precipitation type.  Everyone starts as snow and most will change to sleet Tuesday morning.  From the Portland area south, freezing rain is possible Tuesday morning too.

The good news is I don't think freezing rain will be widespread or long lasting enough to create a significant power outage risk.  That risk is higher to our south.

Some snow showers are possible in New Hampshire and western Maine late today and this evening, with minor accumulations in spots. Most areas will stay dry.

Steady snow begins in Augusta around 2 a.m., Bangor around 4 a.m.

At 4 a.m., most of the state will be seeing snow.  But already at that point, sleet is likely in southern and coastal York county.  The commute in southern Maine will be pretty icy as a result.

By 6 a.m., the changeover to sleet is likely happening in Portland.  Between 6 a.m. and 9 a.m., snow will change to sleet in the rest of southern and central Maine.  Mixing may even get all the way to the mountains.

I'm thinking temperatures at the ground level will really struggle to get above 32 degrees - with the exception being near the immediate coast and in southern York County.  I've actually adjusted the model temperatures down -- I think it's too warm.  So, what you're seeing here is my best estimation for the temperatures.  Notice how inland it's well below freezing at noon, with a light mix, while closer to the coast it's near freezing with rain -- that should be freezing rain.

By Tuesday afternoon, the steady precipitation will be ending from west to east. It'll be much drier in southern and western Maine and it should be much easier getting around. Off and on light snow or a light mix will continue in central and northern Maine.

Temperatures will start to drop late in the afternoon, so any untreated areas will remain icy.

The ice will limit snowfall accumulations to 2" or less in southern/coastal York County, 2-5" in most of southern and central Maine. The amount of snow depends on how quickly the switch to sleet happens (earlier, less snow, later, more snow). 5-8" of snow is expected around Route 2, with the highest amounts across the far north.

Keep in touch for updates today as timing when the changeover to sleet and freezing rain happens is still tricky.