Warm, wet, windy start to the week in Maine

A big warm up is on the way, but it comes at a price. 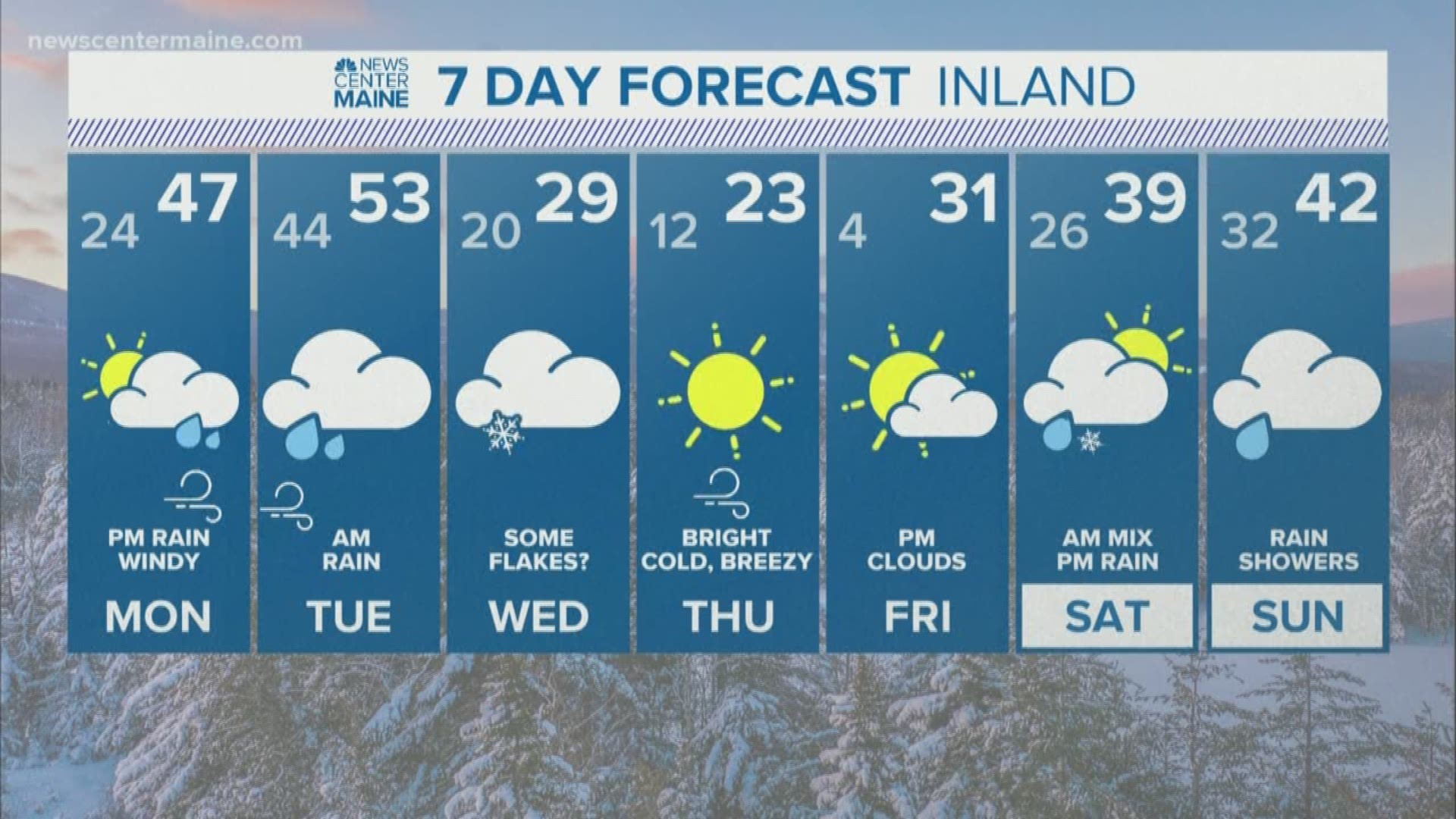 MAINE, USA — Talk about DecemBRRR so far this month, am I right? The first storm of the month, which occurred the first day, brought snow to Maine. Some spots along the coastline got their first snow flakes and their first foot of accumulation all at once!

Things are going to change in Maine come Monday. While there's no pun I can think of for being warm in December (maybe DecEMBER?), it's the weather that comes with the temperatures that we need to talk about.

Monday and Tuesday are forecast to be in the 40s and 50s, with a handful of spots getting into the upper 50s on Tuesday.

This is the good part of the forecast if you dislike the cold. The not-so-good part is that the storm brings wind and rain, too.

Rain showers start up Monday morning. Some of the valleys in western and northern Maine could start off with some freezing rain mixing in. By the afternoon, the warm air wins and everyone sees plain rain.

Rain becomes increasingly steady and heavy later in the day and overnight into Tuesday.

Storm drains will need to be monitored. If drains become clogged, this could lead to some pooling on roadways. Try to clear the snow off of the drains, if you can. Beware of isolated areas of high water once the rain really starts to come down.

Wind gusts also pick up later on Monday. The coastline will likely see the strongest wind gusts with wind coming out of the south and off of the ocean.

This southerly wind is what brings in all of the warmth. While widespread power outages look unlikely, there will probably be some isolated issues.

Wind gusts do relax later in the day on Tuesday. This should give crews some time to get into some of the issues before the Arctic air returns.

In fact, the National Weather Service has issued some headlines as of 10 p.m. Sunday that show the best chances for strong winds will be along the coastline Downeast during the overnight hours Monday into Tuesday.

There might be a little bit of sunshine late in the day on Tuesday. This is all just a show to distract us from that strong cold front late Tuesday night, though. Enjoy it while it lasts since it's short-lived.

Cold air rushes in overnight Tuesday into Wednesday. With the cold air phasing in as the moisture moves out, a transition to snow is likely along the front.

The best chance for minor accumulations will be along the coastline. Overall, the snow should not cause many issues. Totals for most might not even make it to an inch. More on this as we get closer.

Really, the biggest story here is going to be the wind and heavy rain. Keep an eye out for some power issues on Tuesday morning, especially Downeast.

If you want more weather information, follow me on Twitter and Facebook. Stay safe out there and watch for a big, bright yellow object in the sky on Tuesday. We haven't seen much of that lately so we'll take what we can get.