The strong wind from Tropical Storm Henri won't make it to Maine, but we will experience tropical downpours. 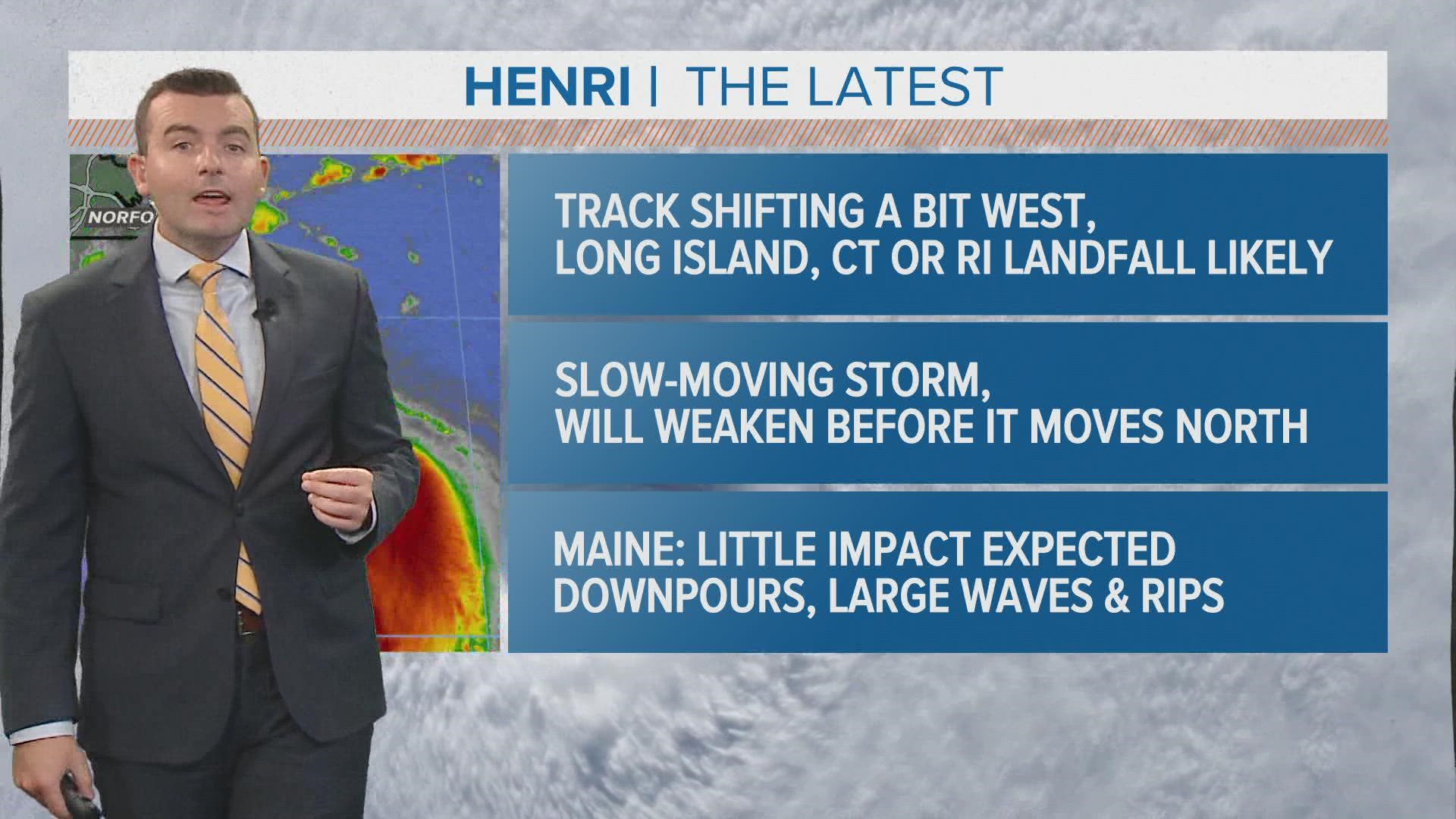 MAINE, USA — Henri was upgraded to a category one hurricane this morning and has its eyes set on southern New England, where there will be major disruption and impacts.

It's possible the storm strengthens into a category one hurricane today, while traveling over warm Atlantic water.

The latest forecast from the National Hurricane Center takes the center of the storm into either Long Island or southern New England Sunday afternoon. It will either be a strong tropical storm or category one hurricane.

The storm will be slowing down as it makes landfall. This is key for Maine. As Todd noted yesterday, New England hurricanes are typically fast-moving and cause damage over many states before weakening. That won't be the case here. Instead, it will start weakening while meandering through southern New England after landfall.

So, for northern New England, damaging wind gusts are not expected. There will be rounds of tropical downpours, off and on, starting Sunday afternoon lasting through Monday into Tuesday morning, as the storm's remnant circulation swirls through. In the heaviest rain there will be drainage issues Sunday night and Monday. Rain amounts may top 2 inches in spots.

In southern New England it's a vastly different story, as wind is a real concern and power outages will be widespread near the path of the storm.

The center of the storm can make landfall anywhere within the National Hurricane Center's official cone, which currently spans from New York City to Block Island.

Trends in some of this morning's guidance are for a track on the eastern half of that cone, which would put Long Island, eastern Connecticut, Rhode Island and southeastern Massachusetts at greatest risk for damaging wind gusts. This track could wobble west or east over the next 24 hours though.

Even in this scenario, gusts would be limited to around 30-35 mph at worst over the southern Maine coast. Widespread power outages are not expected here, but they will happen to our south.

Along the coastline, large waves and breakers are expected, as well as rip currents. We also have a full moon, and high astronomical tides because of it. Minor coastal flooding and splashover is expected Sunday night through Monday night.

Follow updates from us through the weekend and keep any friends and family in southern New England in mind.