Strong wind gusts behind an Arctic front made for tough travel in Maine on Tuesday. 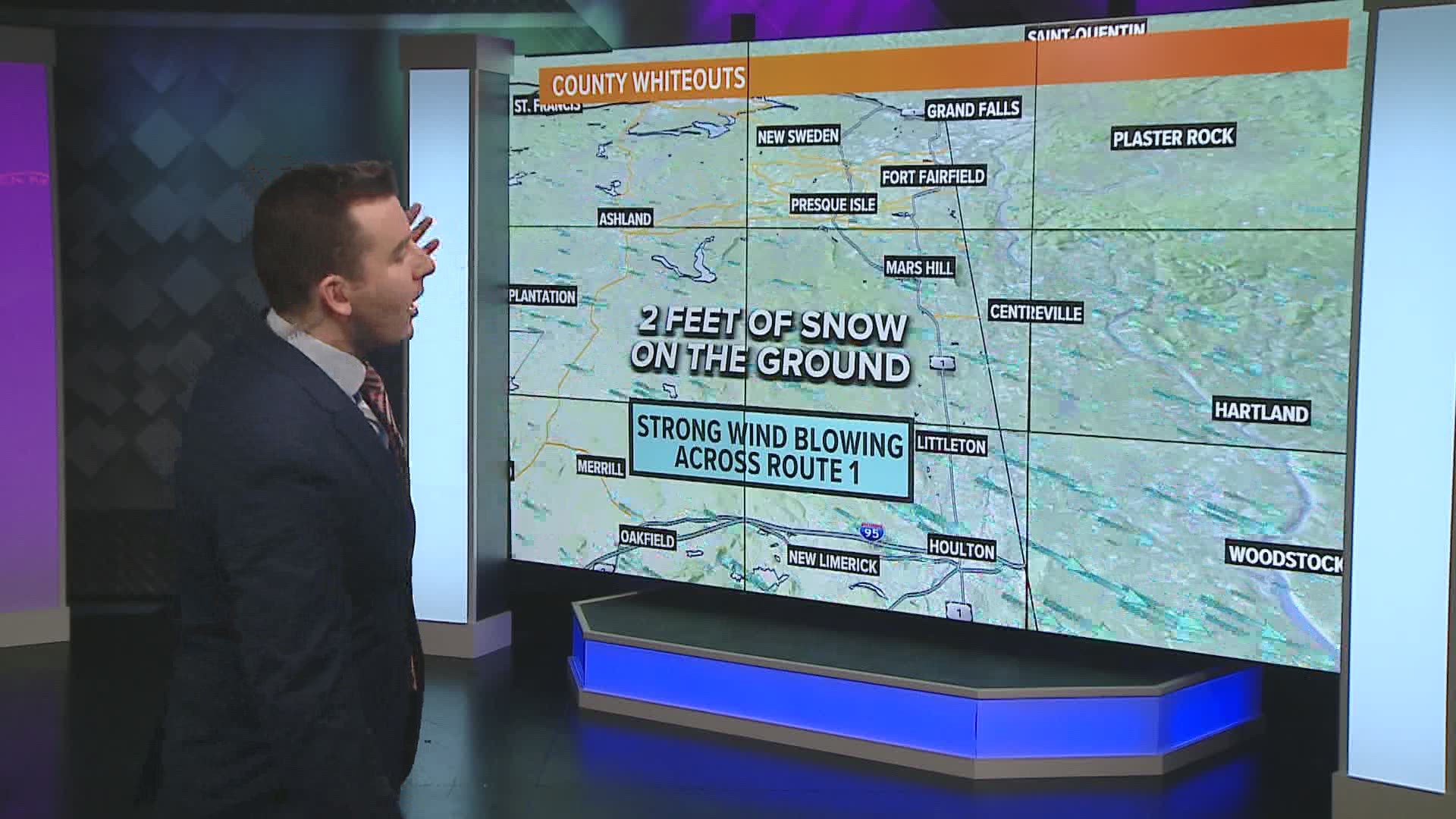 MAINE, USA — The winds were feisty on Tuesday as Arctic air settled in over Maine. The two biggest impacts from the storm were related to whiteout conditions and various areas of storm damage.

For reference, the lists of strongest wind gusts from NWS Gray and NWS Caribou will be used in this article. Click the links above to get to their full lists.

The strongest gusts were generally found in western Maine, including various reports from areas like Bethel and Carrabassett Valley with gusts in the 70 mph range.

At the end of the article, I'll briefly touch upon some of the coldest wind chills recorded on Tuesday.

Let's start with some of the damage reports from this storm.

As the winds raged, reports of damage started to come in from across Maine and New Hampshire.

About 15,000 customers remain without power this morning... yesterday was pretty wild. This truck was crushed in Mechanic Falls. Looking at more of the damage on @newscentermaine right now. #wakeMEup pic.twitter.com/gPr932ODWt

Ryan showcased a picture of a tree that fell and smashed a truck in Mechanic Falls.

A 79-year-old woman is in critical condition after high winds caused a pine tree to fall on the vehicle she was traveling in Tuesday. Kennebec County Sheriff's Lt. Chris Read said she was impaled by a branch.

RELATED: 79-year-old woman in critical condition after Maine pine tree fell on her vehicle and impaled her

There were various other damage reports, including trees and powerlines down in East Baldwin; broken power poles in Bartlett, NH; a portion of the metal roof peeled up at the Snow Cap Inn at Sunday River.

Thanks to all of the viewers who sent in reports and pictures of damage to the "Near ME" section of our app.

Some of the top wind gusts across Maine were really impressive. It's easy to see why there were so many damage reports when you consider how strong the wind was.

Bangor International Airport registered a gust of 53 mph. Some of the highest gusts occurred in western Maine, where multiple reports of gusts over 65 mph came in.

Whiteout conditions were a big issue across sections of Aroostook County, too.

The wind was strong enough to blow the snow across roadways. This was especially problematic for roads with a North-South orientation, such as US 1.

Since the wind was coming out of the northwest, it acted as a crosswind and blew the snow onto the roads. It made things very slick and caused whiteout conditions.

While the official observations at some of the weather sites do not technically meet blizzard criteria, this was similar to the ground blizzards that sometimes occur in other parts of the country. These happen when wind blows snow around and creates blizzard conditions, although no snow is actually falling from the sky.

Blizzard conditions means three or more hours of visibility below 1/4 mile, with sustained wind speeds or frequent gusts over 35 mph. 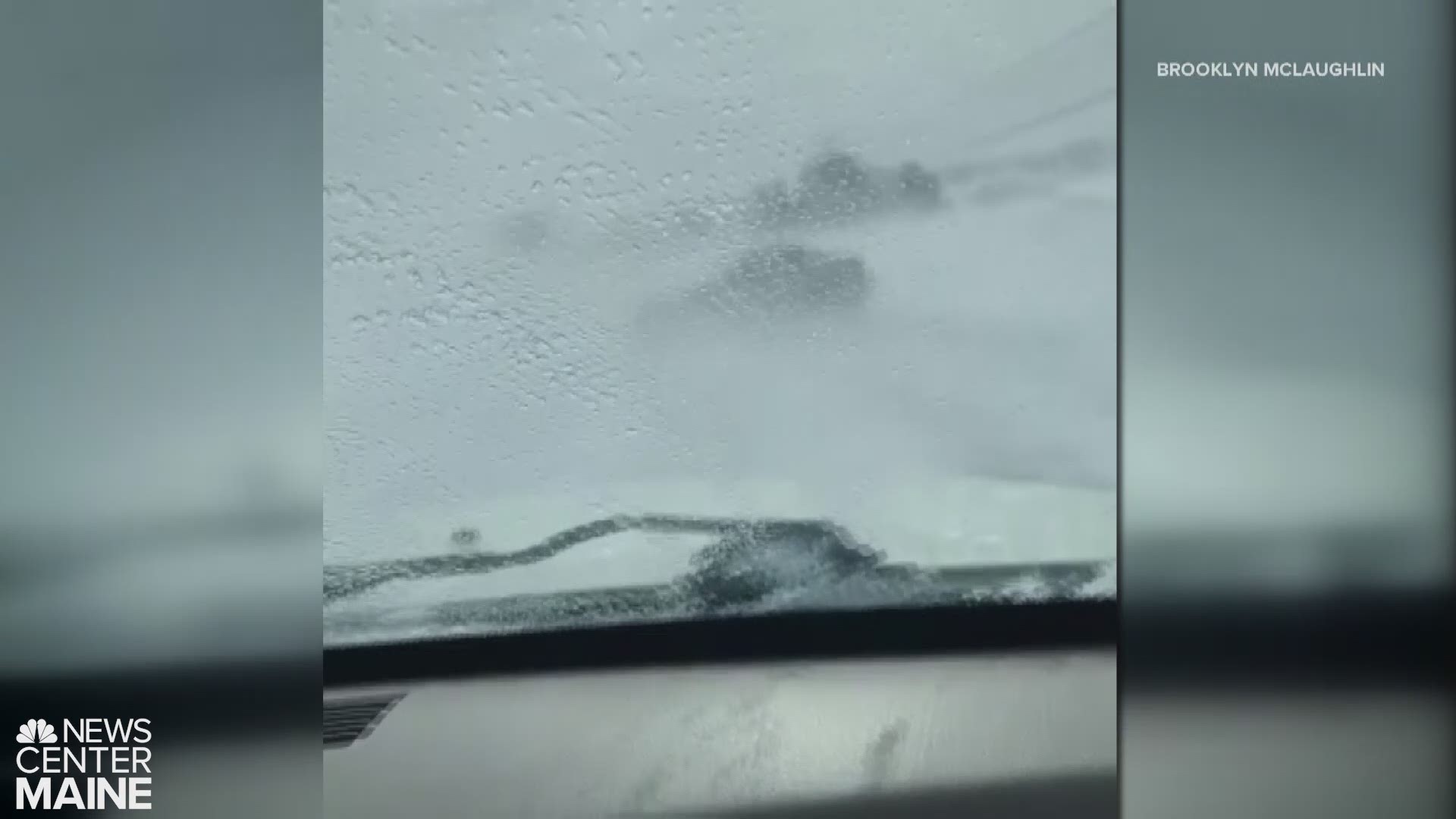 Ryan's video segment in this article has a more in depth explanation about what happened here.

Last, but certainly not least, was the impressive cold that moved in.

Temperatures fell quickly from the upper 30s and low 40s on Monday into the single digits.

When combined with the strong wind gusts, it felt like it was well below zero. The most impressive wind chills were near -40 degrees.

Thankfully, all of this was pretty short-lived. Things are looking quiet for the next week or so, and -- dare I say -- fairly mild.

Enjoy the upcoming break from the active weather pattern.

RELATED: Mainers without power Tuesday due to high winds