Maine and New Hampshire get a taste of winter at the beginning of the week as cold air and strong wind gusts move in. 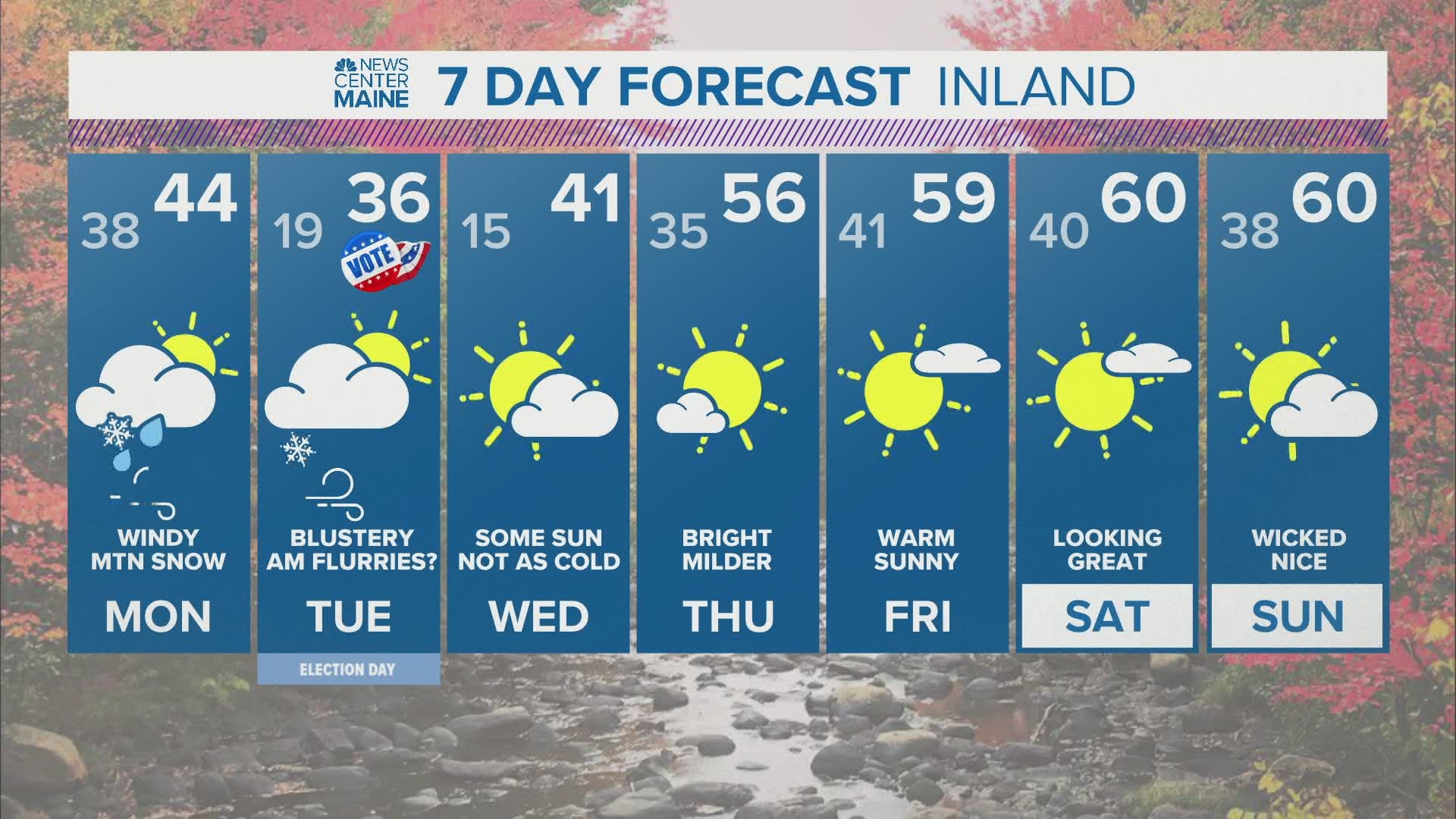 MAINE, USA — Ahhh, November. It's that month that isn't quite sure if it's fall or winter. Sunny, warm days and snow are all in the cards... sometimes only a couple of days apart!

That's how this week goes.

On Monday, a cold front will pass through Maine as a storm starts to rapidly strengthen to our east. These will be the main ingredients for weather at the start of the week.

Rain wraps up on Monday morning for most. Colder, drier air will begin to sink in after the moisture moves out.

The exceptions here will be sections of The County and the mountains where cold air rushes in before the moisture leaves. Snow totals are not too impressive, but it could be enough to cause some slick roads here or there.

Credit: NEWS CENTER Maine
This is a small event limited mostly to the mountains and northern Maine.

There could be a couple of isolated reports totaling 4" of snow on some of the high peaks or right along the Canadian border. In general, cold air chasing moisture never results in much snow.

The National Weather Service in Caribou is highlighting the threat, too. This advisory is for the impacts of slick roads since it's the first snow of the season.

It's also worth mentioning that falling snow reduces visibility on the roads. Travel with caution!

Wind gusts are the bigger story for the start of the week.

The Answer is Blowin' in the Wind

After the frontal passage Monday morning, the wind direction shifts to be out of the west.

Sustained winds will be between 15 and 30 miles per hour.

As the wind field strengthens in the early afternoon, expect gusts to approach 30 to 40 miles per hour in most of central, northern, and eastern Maine.

The foothills down to the Midcoast will see some stronger gusts. While I kept this region in the 40 to 45 mph range, there could be a rogue gust above 45 mph here.

I think the best chance at registering a gust over 45 mph will be far southern York county and southern New Hampshire.

It's possible that a gust to 50 mph gets registered, but I think the chances of actually getting there are still somewhat low.

Generally speaking, widespread power outages do not seem likely at this time. Given the wind direction, lack of 55 mile per hour gusts, and bare trees, I don't anticipate a lot of damage.

As always, though, a few isolated incidents will probably pop up.

But How Does it Make You Feel?

The dropping temperatures and strong wind gusts spell out a cold afternoon and evening on Monday.

Temperatures will be falling into the 20s and 30s, especially after sunset. It will feel more like the teens and 20s after you factor in the colder wind.

Election Day also looks cold and blustery on Tuesday. Might be a good idea to grab a heavy jacket when you head to the polls, just in case you have to wait in a line.

A quick glimpse ahead reveals a much warmer and calmer end to the week. I'm thinking most spots will be near or above 60 degrees for at least Thursday through Saturday, but Sunday is trending a bit milder. It's worth it to enjoy some nice days after this unseasonably chilly start to the week.

RELATED: What will the weather be like on Election Day? A national Nov. 3 forecast