Strong wind gusts, hail possible with thunderstorms in Maine this afternoon and evening

Storms will fire up in the afternoon. Ample energy means storms could become severe, with strong wind gusts and hail being the biggest severe weather threats. 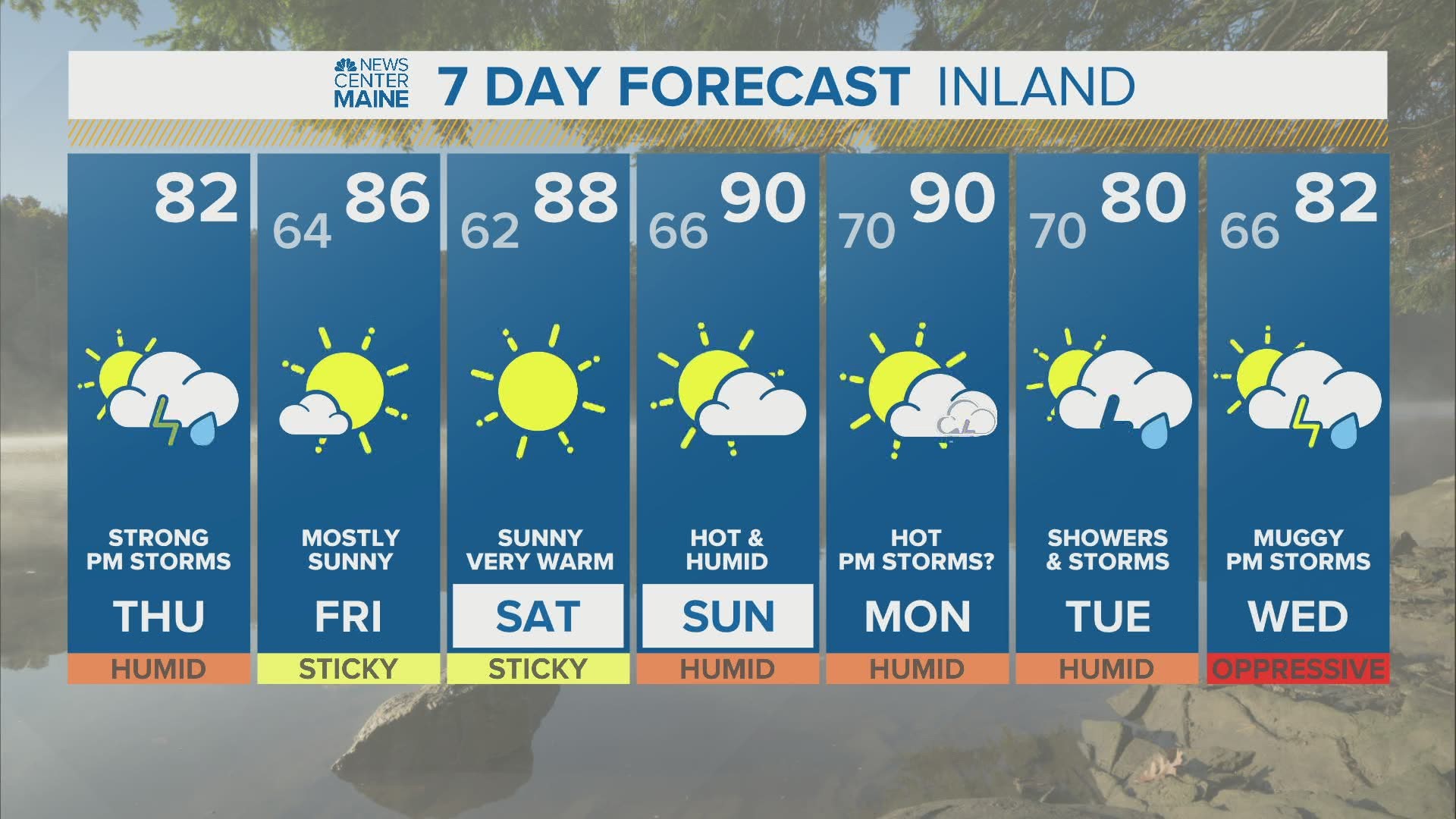 The biggest threats associated with these storms are heavy rain and strong wind gusts. Underneath the strongest storm, hail is also expected.

While the overall threat for a brief spin up is low, conditions suggest that it cannot be completely ruled out. Still, this is not the biggest concern moving forward. Straight line wind gusts can be just as damaging or more damaging than a weak tornado.

The Meteorology and Timing

I suppose we can't talk about a storm threat without talking about why they happen, can we?

This outlook from the Storm Prediction Center highlights the areas most likely to see strong thunderstorms this afternoon. Areas in yellow have the best chance at seeing severe storms. Portland, Bangor, Augusta, Lewiston, Rangeley, and Waterville are included in this area.

Credit: NEWS CENTER Maine
The most storm energy available in southern Maine will occur early in the afternoon.

The image above shows thunderstorm energy. Orange and yellow mean that there is more energy available for thunderstorms to use, while red means there is less.

The more energy available, the stronger the storm can become.

Storm energy over southern Maine will peak in the early to mid afternoon, which is when the first round of storms push through.

Storms will form in New Hampshire. The motion will be to the southeast, eventually moving into Maine.

Credit: NEWS CENTER Maine
The storms will push off of the coastline in the early to mid afternoon before the second round fires up.

Since the environment will have plenty of energy to support strong to severe storms, these will need to be monitored closely. I also think this is where and when we have the best chance at seeing a brief spin up.

While things ramp up across southern Maine, it will be a bit quieter closer to Bangor. However, this changes in the later afternoon.

Credit: NEWS CENTER Maine
After the storms move off the coast, a second round is expected in central Maine where the storm energy will be more plentiful.

Peak storm energy is expected in central Maine close to 5 p.m. or 6 p.m., so the storms are going to move in a bit later.

Credit: NEWS CENTER Maine
Storms will fire up in the highlands, moving southeast toward Bangor.

Again, the threats will be similar, though in the evening. This is important since storms will be crossing the I-95 corridor in the middle of rush hour. Torrential rain under thunderstorms reduces visibility and also can cause hydroplaning.

The other severe threats are similar, though the likelihood of a brief spin up is not much of a concern with this second set of storms.

Overall, storms will clear late in the evening with quieter conditions overnight.

Storms are in an environment where they can easily tap into ample energy. There is also enough wind shear to keep them organized, which contributes to the severe weather threat today.

Credit: NEWS CENTER Maine
These threats are for the entire day, but the biggest concern is still going to be strong wind gusts in the afternoon and evening.

Under any storms, torrential rain is expected. With such heavy rain, there could be some isolated flash flood issues in areas of poor drainage.

Strong wind gusts are also expected under stronger storms. Isolated power issues will be possible as the storms move through.

Hail is a threat today, too. With enough cold air in the higher parts of the atmosphere, strong storms will support the best chances for hail to form. While it seems likely there will be at least some hail reported today, the biggest threat is still strong wind gusts.

Last, but certainly not least, is the threat for a brief spin up. This is mostly for areas close to Sebago Lake, where we tend to see stronger storms.

The surface winds suggest there could be some extra rotation here. As such, storms will need to be monitored closely to see if a brief spin up does occur. The threat overall is quite low, but it is not zero.

If you find yourself under a severe thunderstorm warning, seek shelter immediately. The best places to go are basements. If you do not have a basement, an interior room with no windows is also a good option.

You can use pillows or a helmet to try to protect your head in cases of severe storms, too.

You can also follow us online and on social media, as well keep up with us on-air.

If you see severe weather, send it in to our team of meteorologists via e-mail or social media. They can be reached at weather@newscentermaine.com. Always make sure it is safe before you send a severe weather report, especially if you include pictures.