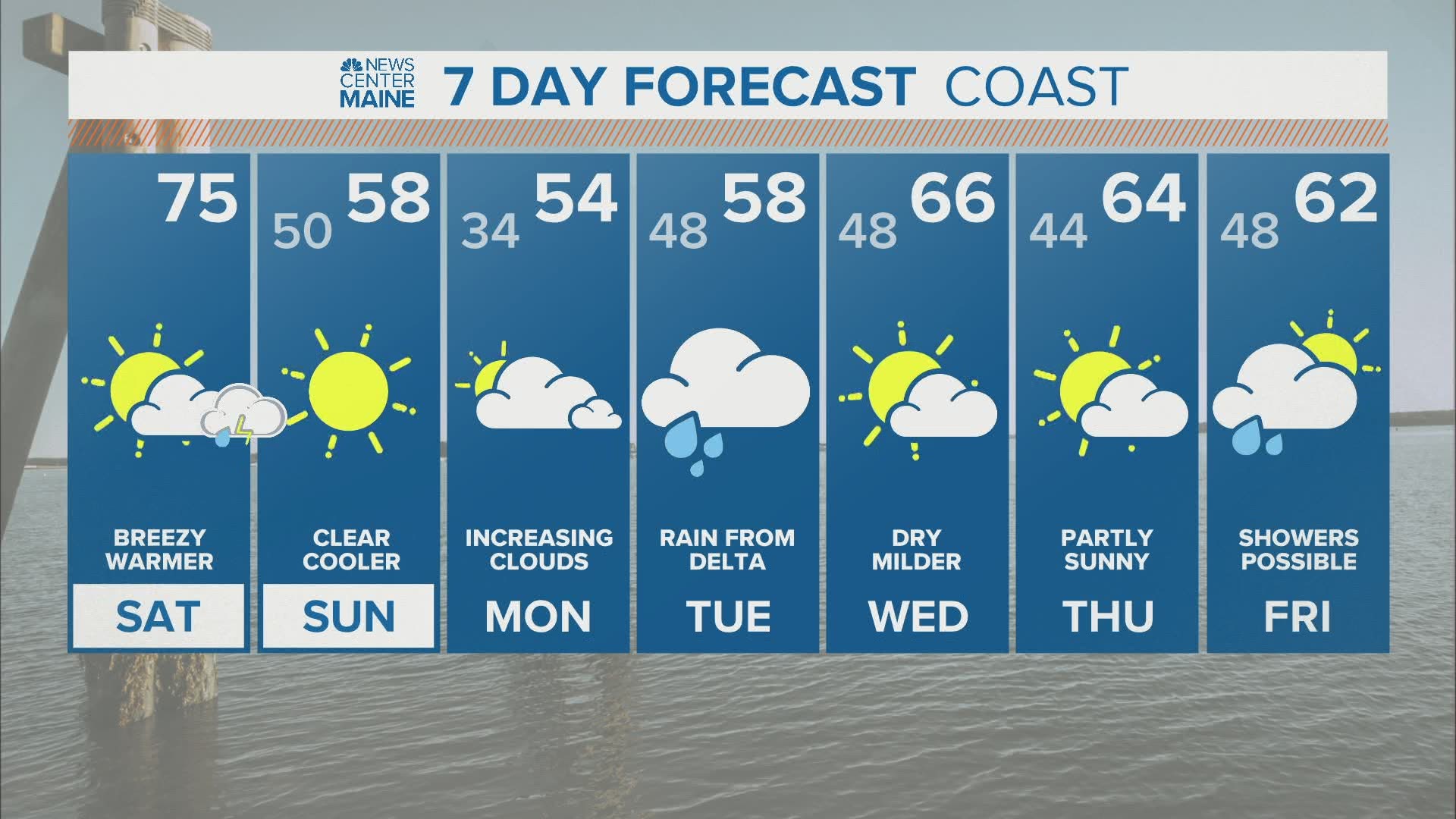 October in New England. Apples and pumpkins come to mind. Snow starts falling in the high peaks. Frost becomes a normal part of the morning routine as the month goes on.

Sounds peaceful, right? Well, it's 2020. Don't expect anything to be normal.

Strong thunderstorms are possible through parts of New England Saturday evening, including parts of Maine and New Hampshire.

The biggest risk for storms will be strong wind gusts. Still, the atmosphere looks primed for strong storm organization (and rotation) if storms fire. Hail and a brief tornado are all on the table. Let's get into the science behind the storms and the potential impacts.

There are a few things to look at when it comes to storm ingredients: we need something to give us lift in the atmosphere, we need instability for storm energy, we need moisture, and a boundary like a cold front helps get the storms going, too.

A broken line of storms is expected to form to our west in the mid to late afternoon.

The passing cold front will be the focal point of storms to fire. There will be fairly strong dynamic lifting along and ahead of this front as the temperature gradient (distance between warm and cold air) tightens up.

The position of the jet stream will allow for really strong winds in the atmosphere above our head. Strong winds will allow storms to get fairly organized.

Wind shear will also be plentiful with such strong winds in the atmosphere. The best way to visualize this is to look at the wind map above. Surface wind will be out of the south and weaker compared to wind higher in the atmosphere. The wind abruptly shifts to be out of the west and is much stronger just a few thousand feet above the ground. Rotating storms are a possibility thanks to these impressive wind profiles.

Dew points surge into the upper 50s, possibly the low 60s, ahead of the front, too. Moisture will be plentiful.

With higher dew points, the threat for a brief spin up tornado is higher since you can actually get the funnel cloud to the ground, should one form.

The takeaway: while straightline wind damage from strong gusts is the most likely severe mode, both hail and a tornado cannot be ruled out.

The dynamics behind this storm are impressive. If this was in the middle of summer, the blog would be a bit more urgent.

Credit: NEWS CENTER Maine
The first broken line of storms is most likely to have severe weather with it.

Since the leading line of broken storms is trending later, the severe risk may end up being a bit too late to cash in on the destabilized, energy rich air that will wane quickly as the sun sets.

RELATED: Hurricane Delta set to become record tenth storm to make landfall in the US

If the storms are a bit faster than modeled, this will increase the likelihood of actually getting a few severe thunderstorms in our region.

If the storms do not make it to us until after sunset, the risk for severe weather will be smaller.

Any mature storms moving in will have to be monitored even if they do so after dark, but it's pretty difficult to sustain enough energy for severe weather once the sun sets in October.

Credit: NEWS CENTER Maine
The second line of storms could still pack a punch, but the severe threat will be diminishing.

The secondary line of storms will not have quite as much energy to work with. It seems unlikely that severe weather will happen as the second line of storms moves in. If any of these storms do strengthen, the threat would be for strong wind gusts.

Expect some thunderstorms Saturday evening. Severe weather is possible, especially to our west, but the timing of the storms could be late enough that cool October air keeps storms on the weaker end of the spectrum.

Should any storms spawn a brief tornado, make sure you have a plan to stay safe. The image below is a good safety reminder for severe weather.

Behind the front, Sunday looks peachy. Lots of sunshine with temperatures a touch below average expected. Enjoy, but don't forget to grab a couple of layers. We're getting to that time of year when things get cold quickly!