A quick visit from winter means snow for all of Maine. Southwestern Maine could see 6" or more of snow, followed by a fairly warm week. 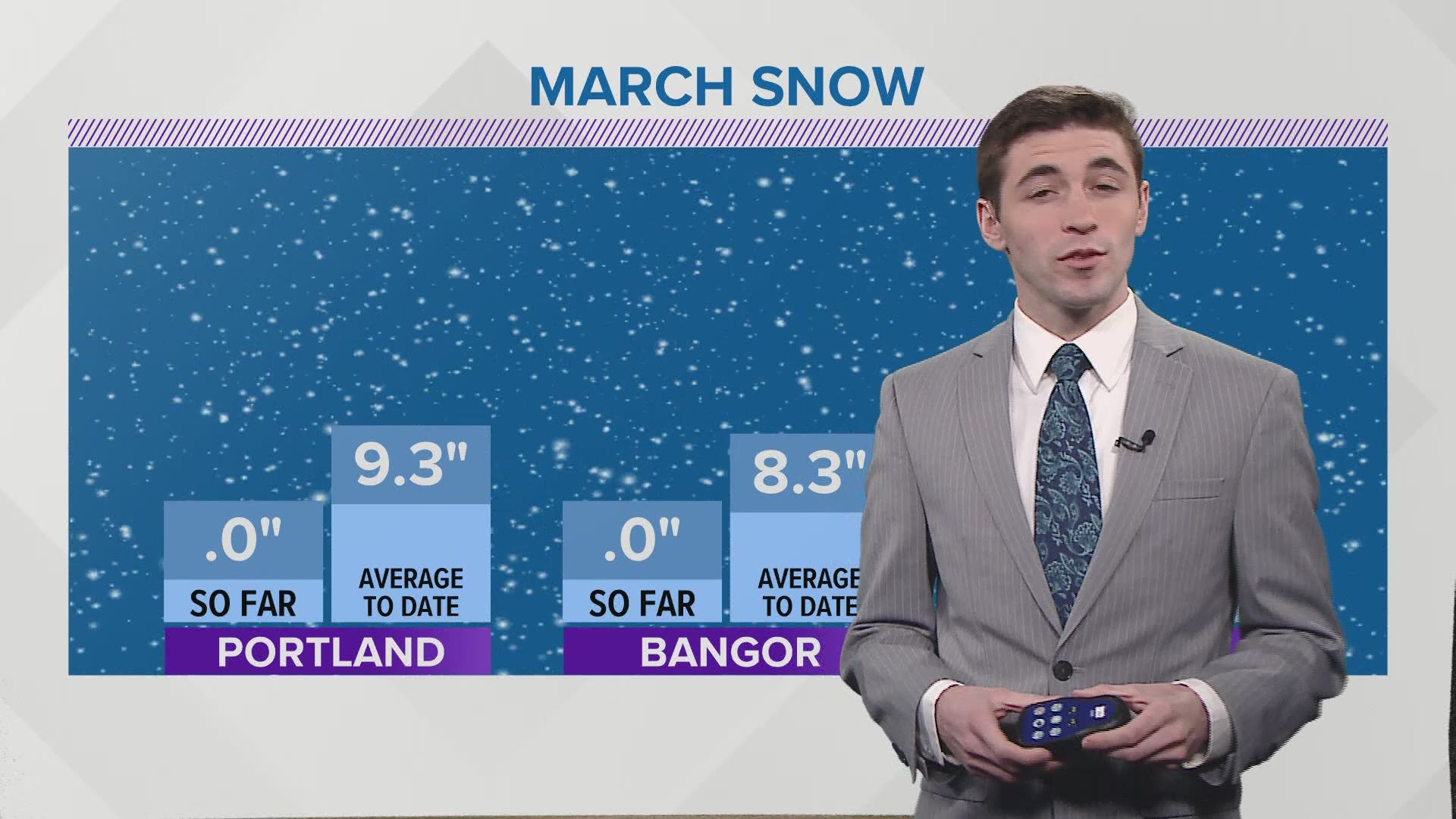 MAINE, USA — Tomorrow night marks the return of winter in New England. Maybe not on the calendar, but definitely in the forecast.

I have had a fair amount of people tell me that we've had it too easy this winter, and I think this is mother nature's answer to that.

This storm is going to drop measurable snowfall in parts of Maine that have not seen snow in over a month. It's not unusual to see snow in March, and this looks like a fairly typical spring storm with snow followed up by a good bit of warm air.

The downside, though, is that it also means the snow is going to be wet and heavy.

I showed this on air and in my blog last night, but I still think it's important to give reference. Bangor and Portland have both registered 0" of snow so far this March, running about 9" below average.

This is fairly impressive and not a common occurrence. Take a look at this chart of March snow stats. There is only one March on record (1946) that had no snow. If 2020 were to finish with just a trace, it would be tied for the second least snowiest March on record.

Not going to happen, though.

Monday sets up with mostly quiet conditions. Clouds thicken through the day, leading to a good bit of cloud cover as early as noon.

Snow showers spread from west to east. By 4 p.m., western Maine will see snow moving in. It reaches Portland and Augusta between 4 p.m. and 7 p.m.

It will become heavy, especially near Sebago Lake to the coastline in York and Cumberland counties.

The storm continues moving east, pushing snow north as it does so. Bangor will see flakes start up between 7 p.m. and 10 p.m. All of Maine will have snow falling by 1 a.m. Tuesday morning.

Credit: NEWS CENTER Maine
Snow continues overnight Monday into Tuesday. Some rain could mix in at the coastline.

Some snow along the immediate coast transitions to rain, as warmer air off of the ocean gets mixed in. This will be as the storm exits and will not impact forecast snow totals much.

It's a pretty progressive system, so the snow wraps up fairly early Tuesday morning. By noon on Tuesday, some Mainers will see sunshine.

If you don't like the snow, wait until the afternoon. Temperatures spike into the 40s, with some spots near 50 at the coastline.

This means there will be a good bit of melting that occurs. Roads should be in pretty good shape by midday Tuesday, except for far northern Maine.

So, what are the snow totals? The biggest amounts will be in western Maine. I would not be surprised to see Fryeburg end up near 10" by the time all is said and done.

The Portland, Lewiston, and Augusta metro areas will be in the 4-6" range. Bangor is a little lower, around 2-4". Downeast and the northern half of western Maine will also see about 2-4". The County misses out and gets about an inch.

The remainder of the week looks fairly active. There's another storm looming for Wednesday. This also has the potential for some flakes, but not nearly as widespread as Monday's storm.

More details once we get a bit closer!