Back-to-back snow storms possible to kick-off 2021. Saturday's storm will bring a widespread 6-10" of snow for most of Maine. 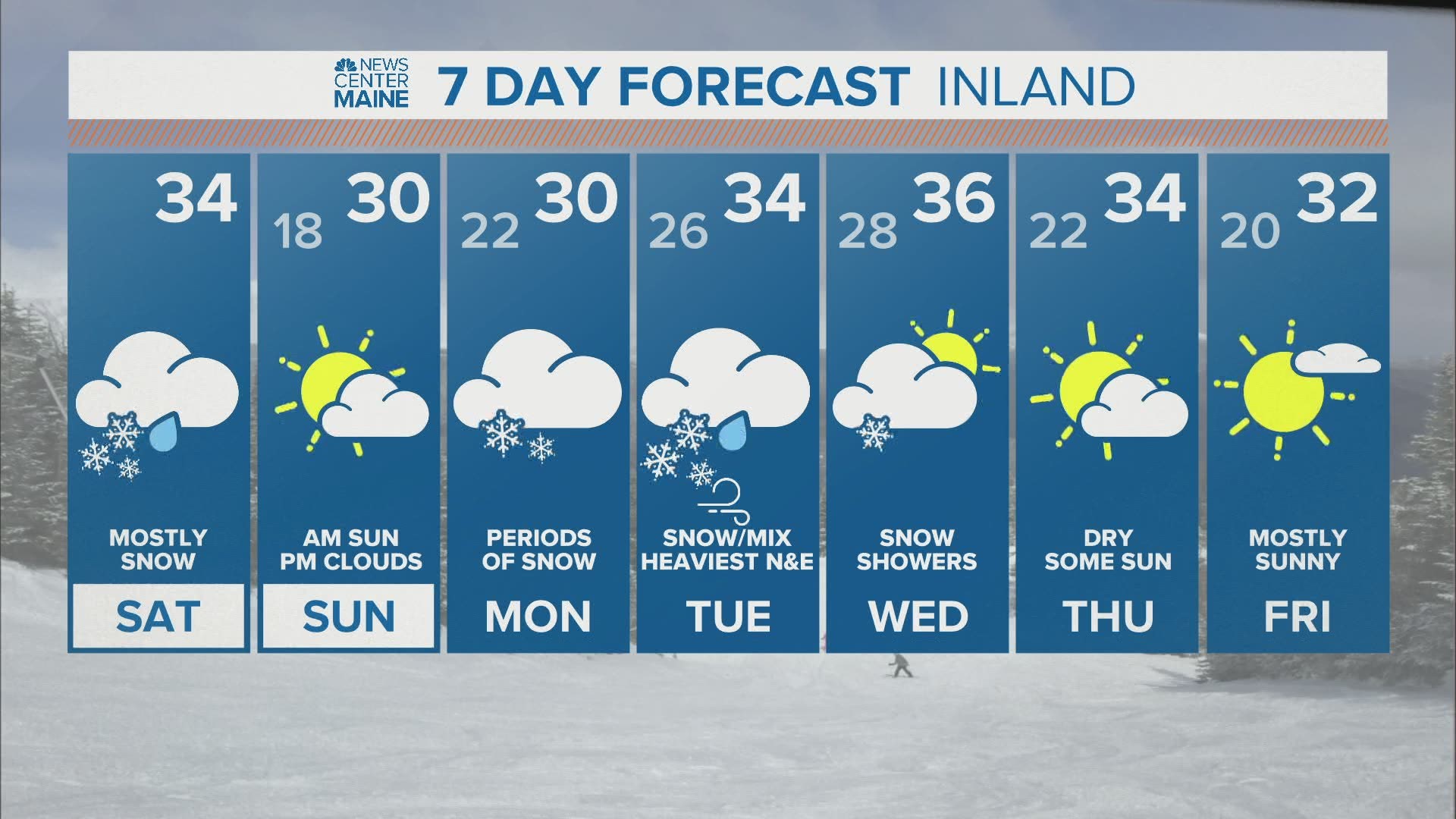 MAINE, USA — It looks like 2021 is going to start off with some active weather. There's a storm moving toward Maine and it's looking a little bit stronger as it gets closer.

Snow totals have been trending up for the last couple of days, and I think there's going to be enough cold air and moisture to squeeze out a solid 6-10" for most of the state, along with northern sections of New Hampshire.

Since the storm intensifies right off the coastline, the County will likely be more in the 3-6" range. I have since bumped this up from the 1-3" range yesterday.

At the coastline, mixing will play a role. It also keeps the snow totals down from Kittery to Belfast.

Clouds are already starting to roll in ahead of this one.

By the time people start to wake up on Saturday morning, roads will already be slick as snow is actively falling.

It won't take much for the mixing to start at the coastline. As the morning goes on, roads inland stay snowy. Snowfall rates will generally be around a half-inch per hour at this point in time, give or take.

This will be the trend through the early afternoon. Mixing continues all the way up the coastline to Penobscot Bay. Some spots right on the water Downeast will also mix in some rain or sleet. The heaviest snow at this point will be from Waterville to Bangor and east.

Through the afternoon, the snow gradually tapers off. There still could be some moderate snow falling inland.

With more cold air getting wrapped in, too, this will bring back the threat for snow at the coast Downeast.

Clearing skies are back as the storm moves away. With clearing conditions and some snow, temperatures will likely fall back into the 20s. Slick conditions will still be possible as ice forms with the colder air.

Here's the new map! Big change is the addition of the 6-10" range. Some central highland spots might even get a foot out of this, but they will be isolated in nature.

The biggest area of uncertainty is from Sanford to Fryeburg. If sleet mixes in a bit further north, it could cut back on totals a little bit.

The opposite is also true. If temperatures stay cold enough, then these areas could actually end up more like 6-8" as opposed to the 3-6" they're currently in.

Eastern Maine will see fewer mixing issues at the coastline. The County is now officially in the 3-6" range. Bangor will be close, but I'm thinking 6-10" is a pretty good bet, given the trends with this storm overall.

Sunday looks quieter and will be a brief break before the next storm chance.

Monday is still up in the air at this point.

What we don't know:

Either way, this active pattern is favorable for storminess. It could prove to be quite helpful for anyone trying to enjoy winter recreation activities, it's mostly snow.

Follow me on Twitter for more forecast information as well as updates on forecast snow totals, @MikeSliferWX.

RELATED: Snowy Saturday in Maine, potential for another storm Monday