Quick snow storm on track for Sunday afternoon in Maine

There's still some uncertainty with the forecast totals, but the picture is a bit clearer now. Snowy roads are expected for most. 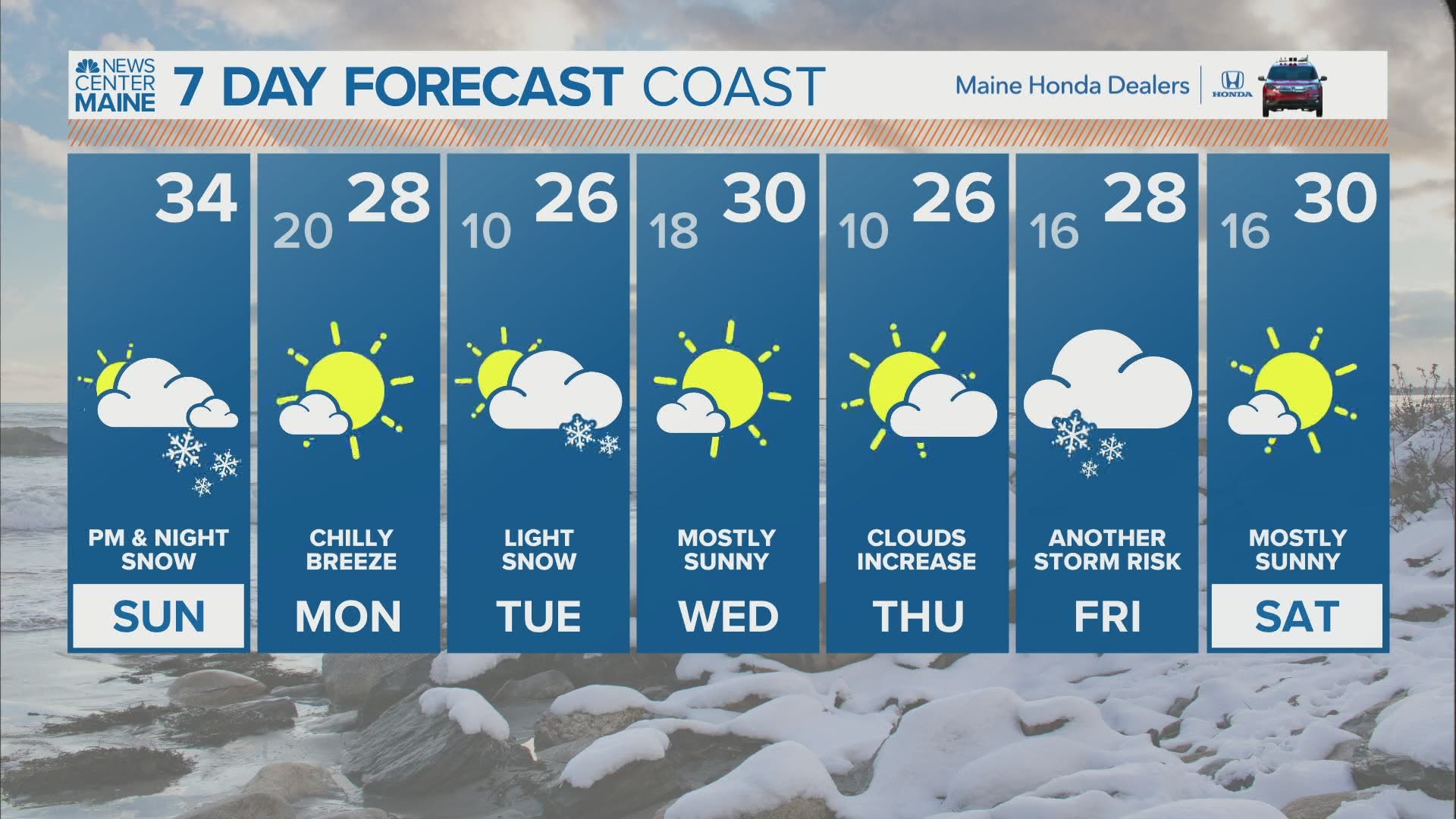 MAINE, USA — Let me preface this entire blog by reminding you that this has been one of the more difficult forecasts in recent memory.

Sunday's snow storm will move through quickly, with most snow falling over about 6 or 8 hours. The only exception is Downeast, where it will take a bit longer for the snow clear out.

So, why is it so difficult? The northern edge of the snow is going to be sharp. A slight wiggle north could easily put coastal areas well over 6", while a slight wiggle south could make the coastline struggle to reach 2".

Given the decent forcing and colder air, I've settled on expected 3-6" for most of the coastline. That map is coming. First, let's talk timing....

Credit: NEWS CENTER Maine
Clouds move in through the morning in southern Maine.

Most Mainers see some sun Sunday morning. Clouds will first move into southwestern sections, eventually taking over the whole state.

Credit: NEWS CENTER Maine
Snow showers begin through the early afternoon and will spread northwest later in the day.

By the early afternoon, snow will be falling through most of York county. Kittery, Sanford, and Biddeford end up with flakes before 3 p.m. Sunday.

Any travel from here on out will become increasingly difficult, although I do not anticipate whiteout conditions with this storm.

Credit: NEWS CENTER Maine
The evening will bring the most snow, with widespread flakes just about everywhere.

Snow steadily spreads north and west, bringing Portland snow around 3 or 4 p.m.; Augusta and Lewiston-Auburn around 4 or 5 p.m.; Bangor around 5 p.m.; Caribou and Presque Isle a bit later.

The light to moderate snow winds down in western Maine around 10 or 11 in the evening. It continues in eastern Maine, including Bangor.

If you're out on the roads at all, take it slow. They'll be slick and visibility will be somewhat low.

This is where the storm gets more interesting Downeast.

As the storm moves south of Maine, it begins to intensify. Heavier snow bands start to wrap in, especially for coastal sections of Washington county.

Snow rates pick up Downeast as the storm winds down everywhere else. Snow rates could end up approaching 1" or more per hour.

I think the morning commute on Monday from Bar Harbor and Ellsworth east to Lubec will be a little dicey and slick. The snow will be wrapping up through the middle of the morning.

The placement of the heavier snow bands will overwhelmingly favor coastal areas Downeast for the highest totals.

As a secondary caution (and a tale of being burned on previous forecasts), I think Portsmouth, NH, to Portland, ME, could end up netting over 6" if the heaviest snow shifts slightly north.

Even with this small chance, I still like the 3-6" range for most of the coastline.

North of the Lewiston to Bangor line will be more in the 1-3" range. The exception is along route 6 in from Lincoln to Topsfield and up to Houlton; I'd expect 3-6" in this area, but maybe a little closer to 3".

This all will fall as snow, and will be fairly light and fluffy.

Not loving this forecast? This might not be the only one on the table. Tuesday night looks interesting, with another chunk of energy on the way.

And if that's not enough, there's another storm lingering for Friday.

We'll cross those bridges when we get there, though. Let's get through this one first.