Phase one of this winter storm is just about done. Phase two, which will occur through most of Friday, will have worse impacts for Mainers. 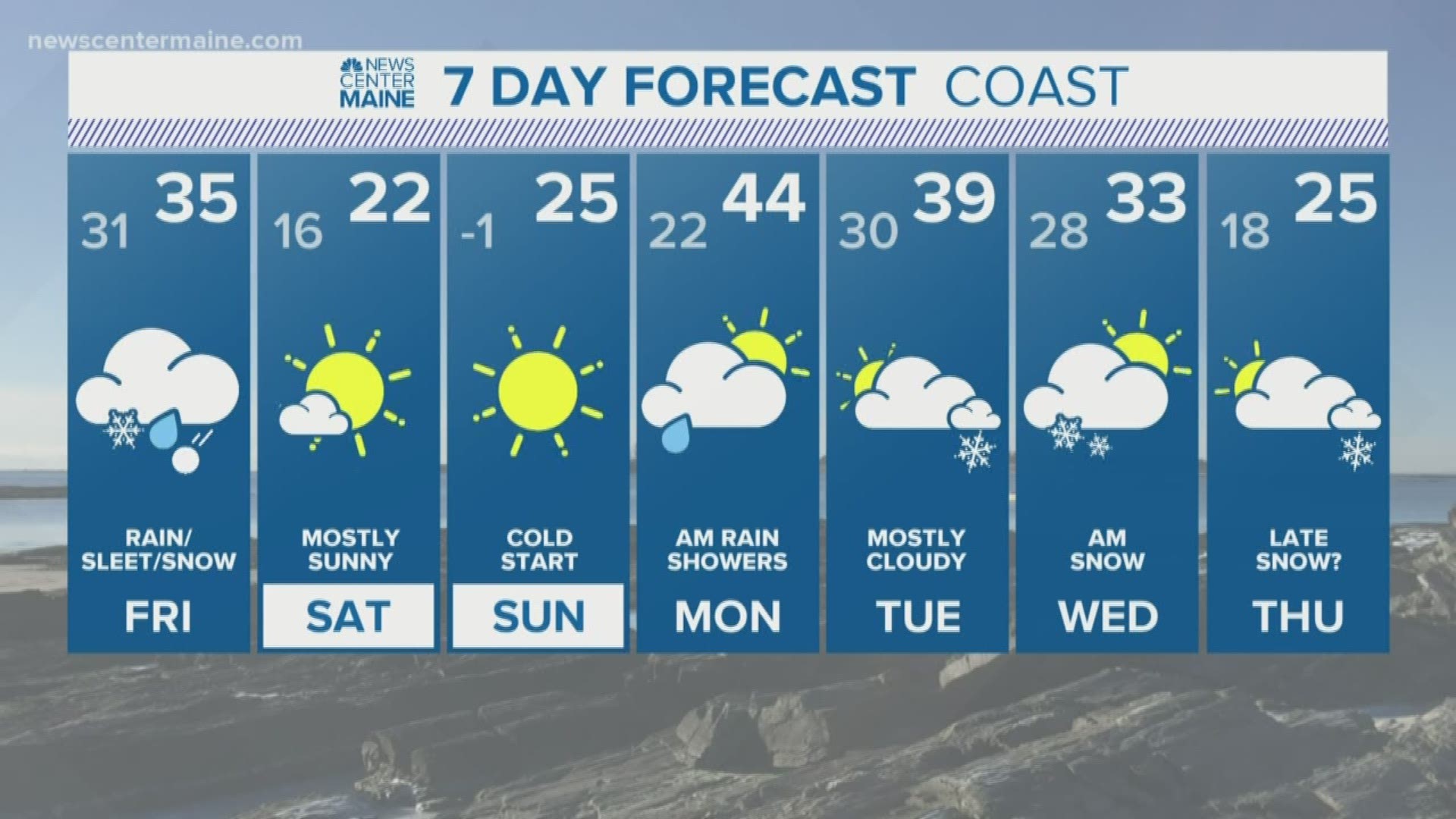 Elsewhere, most saw 2-4 inches of snowfall. Some snow showers will continue through central Maine and the western mountains, but these will not add much to totals.

Light, steady snow will bring new snow across The County through the overnight hours.

A persistent, light north wind continues overnight. With it comes the ability to stay below freezing. Temperatures will be closer to 32° at the coast, but expect things to be icy or snowy from Kittery to Caribou.

Moisture moves back in early Friday morning, overspreading the entire state by 7 a.m. There will be a big spread in what Mainers see. York county right on the coast sees some rain, while the rest of coastal Maine sees mostly freezing rain and sleet. Since temperatures are going to be so close to the freezing mark, there is a chance for some pockets of rain to mix in through the Portland metro area, the Midcoast, and Downeast coastline.

Central Maine, including Lewiston, Augusta, and Bangor, will see a mix of freezing rain and sleet. Sleet may accumulate a bit closer to the foothills.

The Oxford Hills mix in some snow with sleet. The higher peaks see mostly snow. The County will also cash in on this snow event, with totals likely over a foot through western portions of Aroostook county.

The image below is for icing potential on Friday. The chance for widespread power outages remains low at this time, and is not expected to increase. Snow totals—what a lot of people want to know—are a little bit further down the page.

Travel will be a headache all day. The morning commute will be impacted by reduced visibility and icy, snowy roads. This continues through lunchtime and into the evening commute.

Around 6 p.m., colder air starts to get drawn into Maine. This will transition any mixing over to pure snow. Since this happens while the storm wraps up, there's not going to be significant snow accumulation through central Maine and south.

Credit: NEWS CENTER Maine
This is the snowfall forecast for the Friday piece of this system. Overall, storm totals will be higher.

Still, there will be enough to cause some travel issues, especially since that snow falls on top of already icy and slick roads.

We do clear out fairly quickly with just a few lingering snow showers across northern Maine by 9 p.m. Friday.

This storm brings in a batch of cold air for the weekend. It'll be good for anyone who wants to hit the slopes or head out on the snowmobile. Temperatures on Sunday morning will likely be below zero through the entire state.

Stay warm, travel with caution, and get ready for more unsettled weather...there is a chance for snow again on Monday.

Until then, give me a follow on Facebook and Twitter. I'll be posting about the storm as it goes on and keep everyone updated on what to expect to kick off the work week.