Rainstorm for most of Maine this weekend; mountains could see snow

The storm over the weekend will bring the potential for widespread rain. The only spots that might see snow are the mountains and The County. 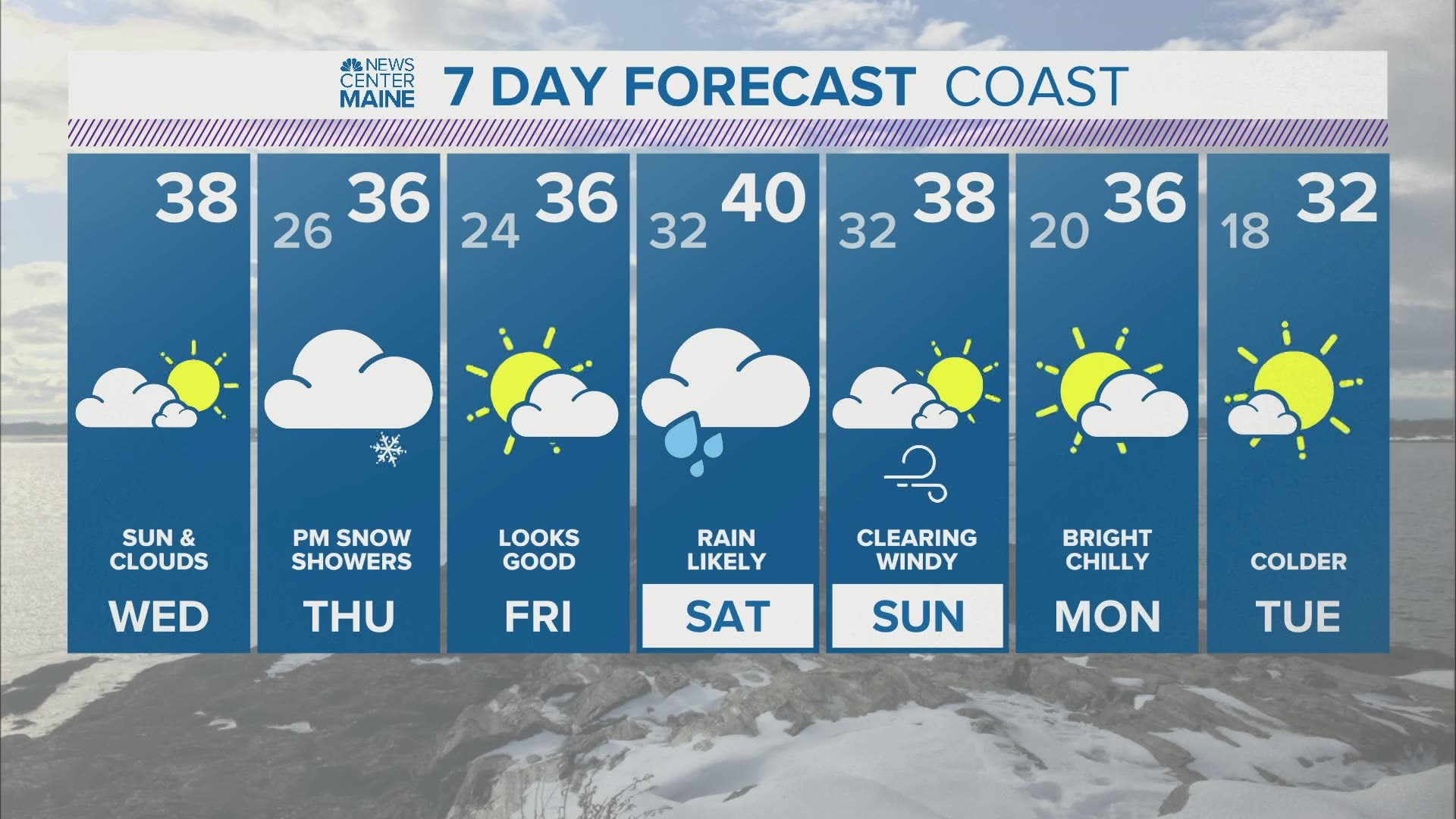 MAINE, USA — January is almost halfway over. So far, it has been a wicked quiet month for weather.

Maine has been pretty toasty, too. Normally, high temperatures this time of year are around 31 degrees, while low temperatures are near 13 degrees in Portland.

Over the first 12 days of the month, though, the average high in Portland has been 36.6 degrees while the average low temperature has been 23.1 - a whopping 10 degrees above average.

The calm, mild pattern may be coming to an end.

Some data points suggest the temperatures may trend colder for the last week of the month. More details on that coming up...first, let's chat about the next few days.

A weak system rolls through on Thursday. The afternoon will still be mild, though, with temperatures in the mid to upper 30s despite mostly cloudy skies.

There could be a stray shower that forms, but the lack of moisture will keep the day fairly dry.

Some of the showers will fall as rain. Higher elevations could see some mixing, but impacts look minimal.

High pressure moves in for Friday. Partly cloudy skies will allow temperatures to jump into the upper 30s in the afternoon. A few spots might even reach the low 40s. It should be a gorgeous end to the week.

Clouds thicken late Friday and a few rain showers are expected before midnight. If temperatures fall quickly enough, there could be some mixing or snow in the foothills and mountains.

While the weather becomes more unsettled, the bigger impacts will be on Saturday.

A storm looms for the weekend. Given the storm track, it looks pretty rainy for most of us. Given the data I have available right now, I'm expecting some wind gusts in the 30-35 mph range on Saturday. A couple of gusts might approach 40 mph.

Should that forecast increase, I'll have updates. Wind gusts currently appear like they'll be weak enough to keep power outages at a minimum.

Western mountains are looking at some wintry weather.

As the storm trends a bit slower, that increases the likelihood of snow for the ski resorts. Great news for the skiers and snowmobilers. This is a much better outcome than a washout in the mountains, too!

The storm clears pretty quickly, with a blustery and chilly day on the way for Sunday.

Wind gusts could again climb a bit, but they will not be damaging. Wind chill values will make it feel cold. This is especially true compared to the mild pattern recently.

Monday looks pretty quiet, with mostly sunny skies and highs in the 30s.

A storm will be nearby on Tuesday. As of now, I think it'll miss to the south.

The pattern into the last week of the month starts to favor some colder air, though. If it lines up with storms, that could mean more snow for us.

Don't take my word for it. Ryan has a great explainer on the "polar vortex" and what that could mean for us locally. Check it out here:

Until then, enjoy the quieter weather. You can get more forecast info from me on Twitter, @MikeSliferWX.