Rain along the coastline, wet snow inland, and strong wind gusts are forecast in Maine on Thursday. 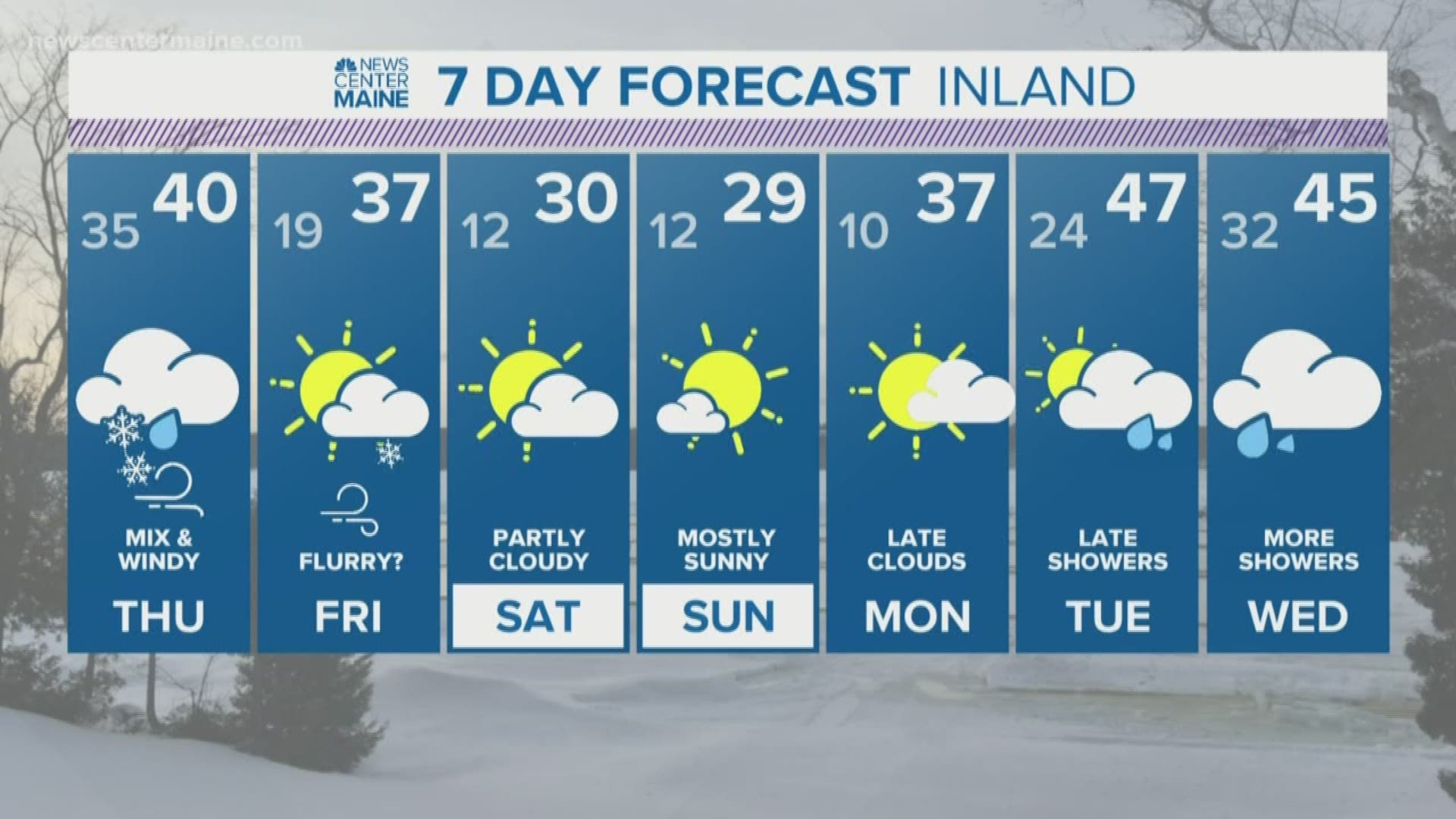 MAINE, USA — The winter storms so far have almost exclusively been mixed events at the coastline with snow inland. Tomorrow's storm will feature much of the same.

I think the best way to break it down is by areas of Maine. This storm really isn't a long duration event. It starts Thursday morning and wraps up late Thursday night.

Spotty, light rain showers will be ongoing overnight tonight into Thursday. Heavier rain moves in along the coastline around 5 a.m., starting in Kittery and gradually moving east. By 7 a.m., the Portland metro area will be dealing with heavy rain and it keeps moving into the Midcoast.

The entire coastline will see heavy rain by 10 a.m.

With such strong lift, I wouldn't be surprised to hear some rumbles of thunder at the coast.

While a few isolated areas could see high water due to blocked storm drains, the bigger story is going to be the wind.

Through the morning, wind gusts along the coastline will be in the 45-55 mph range. These gusts are certainly strong enough to create some power issues at the coast. On the bright side, the temperatures will be fairly mild, so thankfully bitter cold will not be an issue for anyone that does lose power.

As cold air wraps around the low, a transition to snow will be possible in the Penobscot Bay and Downeast. Still, forecast snow totals remain low due to the rain.

The coast ends up clear by dark. It could be a bit breezy at times through the day Friday, but the concern for damaging winds is mainly Thursday morning.

This is, arguably, the most difficult part of the forecast. On Thursday morning, central Maine deals with a very tight gradient of rain to snow.

Given the thermal profiles, the line between rain and snow looks sharp with very little mixing. There will not be much space between the heavy rain and heavy snow.

Credit: NEWS CENTER Maine
Some of the snow will be heavy and wet, but it will be fluffier in the mountains.

At 7 a.m., Lewiston and Augusta will be right on the line for rain and snow. Given the forecast temperatures, it looks like a rain/snow mix with not much sticking at first.

The Bangor metro area will also see some rain through the morning. As colder air mixes in, expect a transition to snow. This will be heavy, wet snow and will be enough to cause some power outages. Even though the wind gusts are not going to be as strong inland, the combination of a few potent gusts and heavy snow does not bode well for weaker trees.

The forecast is mostly snow along and north of the Route 2 corridor. It will, again, be wet and heavy.

Most of the snow in central Maine wraps up Thursday evening, with just some spotty snow showers overnight into Friday morning.

Western Mountains and The County

If you're looking for a lighter, fluffier snow, look no further than the western Maine mountains and the County. This is where the highest snow totals are expected. Mixing will not be an issue and the storm looks cold enough to provide only snow for the duration.

Snow starts up in the mountains before sunrise, but the heavier snow holds off until around 6 a.m. As the low itself strengthens, expect the snow to become heavier. Whiteout conditions are a possibility through the morning and into the afternoon. By noon, all of the County and the Katahdin region will also see flakes fly.

RELATED: Power outage threat for most of Maine

Again, a handful of isolated outages will be possible with a few potent gusts mixed in here or there.

Totals through this part of Maine are in the 6-10" range, but some of the higher peaks could squeeze out over a foot. Since this storm is slightly elevation dependent, there will be differences between the peaks and valleys...but all areas will end up in the 6-10" range.

What should I expect for snow in my backyard?

To give credit where credit is due, Ryan and Todd came up with this snowfall map. Since it's zoomed in, you can see what to expect for totals where you live. The difference between a mostly rain event and 6" of snow is over a pretty short distance, so it's possible these contours will change a bit more before tomorrow.

It will still be a bit breezy across Maine on Friday. Some upslope snow showers continue in the mountains. Wind gusts will not be strong enough for a power outage risk and new snow accumulation will mainly be on the peaks of the western mountains.

The forecast turns colder and sunnier for the weekend. Don't look now, but another warm up is slated for the middle of next week.