A powerful storm is on the way Monday night and Tuesday. Heavy rain and strong wind gusts are expected to start the week off. 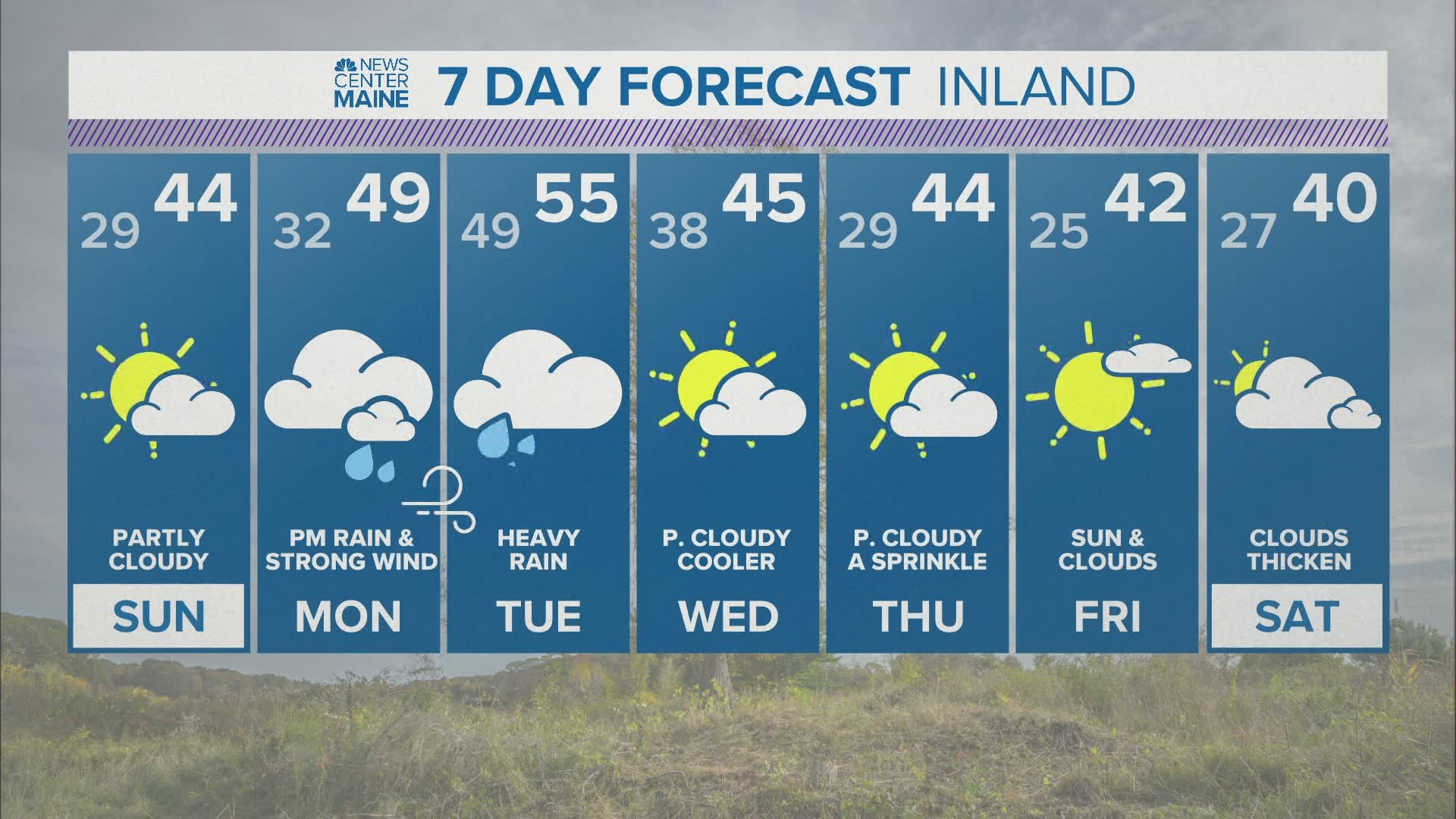 MAINE, USA — A powerful storm is slated to move toward Maine and New Hampshire on Monday.

Strong wind gusts are expected, with the strongest possibly breaking 55 miles per hour.

The storm also features quite a bit of rain. I'm thinking we can kiss the drought goodbye, especially east of Bangor.

Rain totals widespread will be 1.5" to 2.5" inches. Downeast is in the bullseye for highest totals. Modeled rain totals are approaching 4" in some spots, with the possibility for even a little more to fall under localized, heavy downpours.

The energy for this storm starts to move northeast on Sunday and it reaches us on Monday.

Rain showers will start up on Monday in western Maine and New Hampshire.

As the rain starts to fall, the storm won't be impressive at all. Some heavier rain might get mixed in here or there but it really ramps up after dark.

There could even be a few rumbles of thunder mixed in with this dynamic system!

Shortly after sunset, southeast wind gusts will start to climb along the New Hampshire coastline and in York and Cumberland counties.

Gusts are expected to increase in strength through the evening and peak overnight.

Disclaimer: this map may change a little bit before Monday, but it's a good baseline.

As the storm continues to move in overnight Monday, stronger gusts will be registered along the Midcoast and eventually Downeast.

Power outages seem likely at this point, especially along the coastline.

Tidal inundation seems unlikely right now, but some splashover and beach erosion are possible during the high tides on Monday night and Tuesday morning.

Since this storm is associated with a closed upper low, it will take its time leaving. That means Maine is sitting in a spot to soak up the rain, with dry air holding off until Wednesday.

The first round of heavy rain on Monday is followed up by another shot of very heavy rain Tuesday. This is especially true east of the Penobscot.

Modeled rainfall is quite impressive, and I think it's actually on the right track here.

With a connection to tropical moisture, the rain rates will favor a lot of rain falling in a short period of time.

Flooding seems unlikely, except for some areas in poor drainage during heavy downpours.

Drier air will settle in late Tuesday and into Wednesday.

High temperatures on Tuesday could break records in some spots. The warm, moist air associated with this storm will push temperatures well into the 50s. It's possible that a few towns could even make it to 60.

The current drought monitor shows improvements, but I'm expecting it to look a lot different by this time next week.

Tune in Sunday morning to see Ryan's updated forecast. I'll be back Sunday night with a clearer idea of what impacts will be felt where.