Maine rain, snow closes out the end of April

Winter in Maine. Or is it spring in Maine? Either way, snow's on the menu for Sunday and Monday. 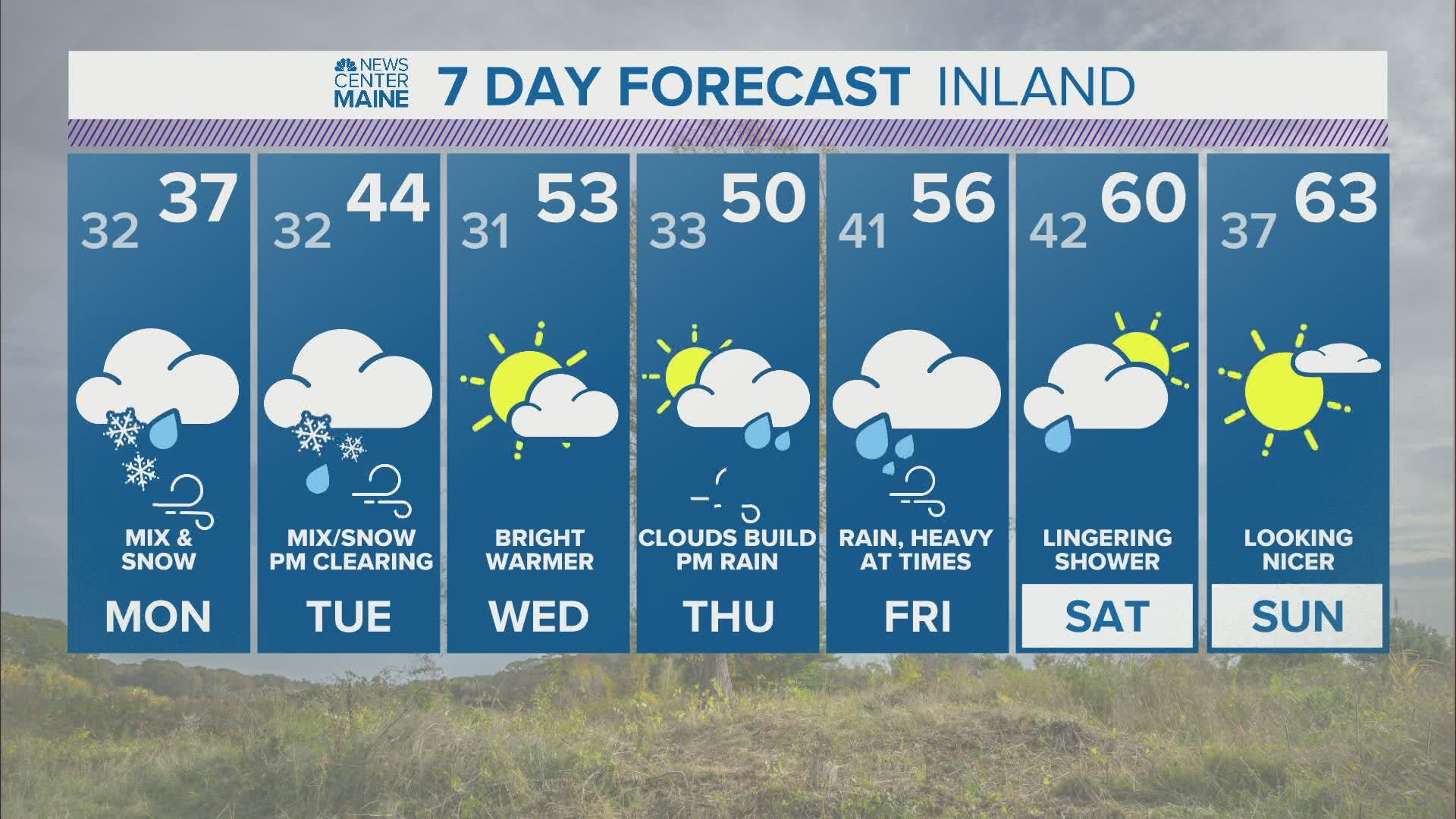 MAINE, USA — As with any late season snow potential, one or two degrees can be the difference between heavy snow and cold rain. With this in mind, my thoughts on what to expect are below.

Rain showers started in western Maine Sunday evening. As showers pick up in intensity and the storm strengthens, they will gradually transition over to snow showers.

The first spot to see snow will be through the higher elevations of Oxford and Franklin counties, especially closer to the international border.

As we pass midnight and roll over into Monday, the dynamic processes of the storm will allow the temperatures to keep falling and ultimately let the heavy, wet snow stick and pile up.

The rain/snow line keeps crashing south, bringing mixing to the coastline by daybreak on Monday morning.

While the amount of traffic on the roads right now is reduced, it is still worth mentioning that anyone who does travel may run into slick roads. Again, this is especially true for inland areas with any elevation.

Credit: NEWS CENTER Maine
While this particular model depicts a lot of rain, it is more likely that some snow will still be mixing in.

Through the day on Monday, snow likely continues in the mountains. Outside of the mountains, I still think there will be on and off snow showers.

Along the coastline, especially from Sagadahoc county and south through Portland and into York county, there will likely be mostly rain showers with some mixing through the day.

Overall, it will be a raw, windy day with temperatures struggling to make it above 40 degrees across the state.

While snow ends in the mountains, it falls through the Lewiston and Augusta regions again. It also makes a last run at the coastline, and seems like the most likely time for the coast to get some accumulating snow.

Some lingering snow or mixed showers are expected on Tuesday. Accumulation looks unlikely and these showers will be much lighter in nature.

It will also be a gloomy, breezy day, though I think we mix in a few high temperatures in the 40s.

Here's the updated forecast by the time all is said and done. Areas near Fryeburg that end up with 6" or so could see some power issues pop up.

Through Lewiston and Augusta, a solid 3-6" looks likely. I expect totals to be on the lower side of this range, but still enough for a couple of isolated outages. This is a similar story for interior Washington county.

Bangor, most of the Midcoast, and the Downeast coastline will end up in the 1-3" range.

The County gets less than an inch overall, but everything that falls will be frozen.

Brunswick, Portland, and along the southern coast will get up to a slushy inch.

Wednesday looks like a pretty nice day, but temperatures will still be below average for this time of year.

Thursday will feature a big warm up ahead of our next storm. Heavy rain is possible Thursday night and into Friday, leading to the chance for some localized high water to start off May.

It will be warmer though...so we've got that going for us, which is nice.