Mild pattern in Maine can still be snowy; two storms to watch 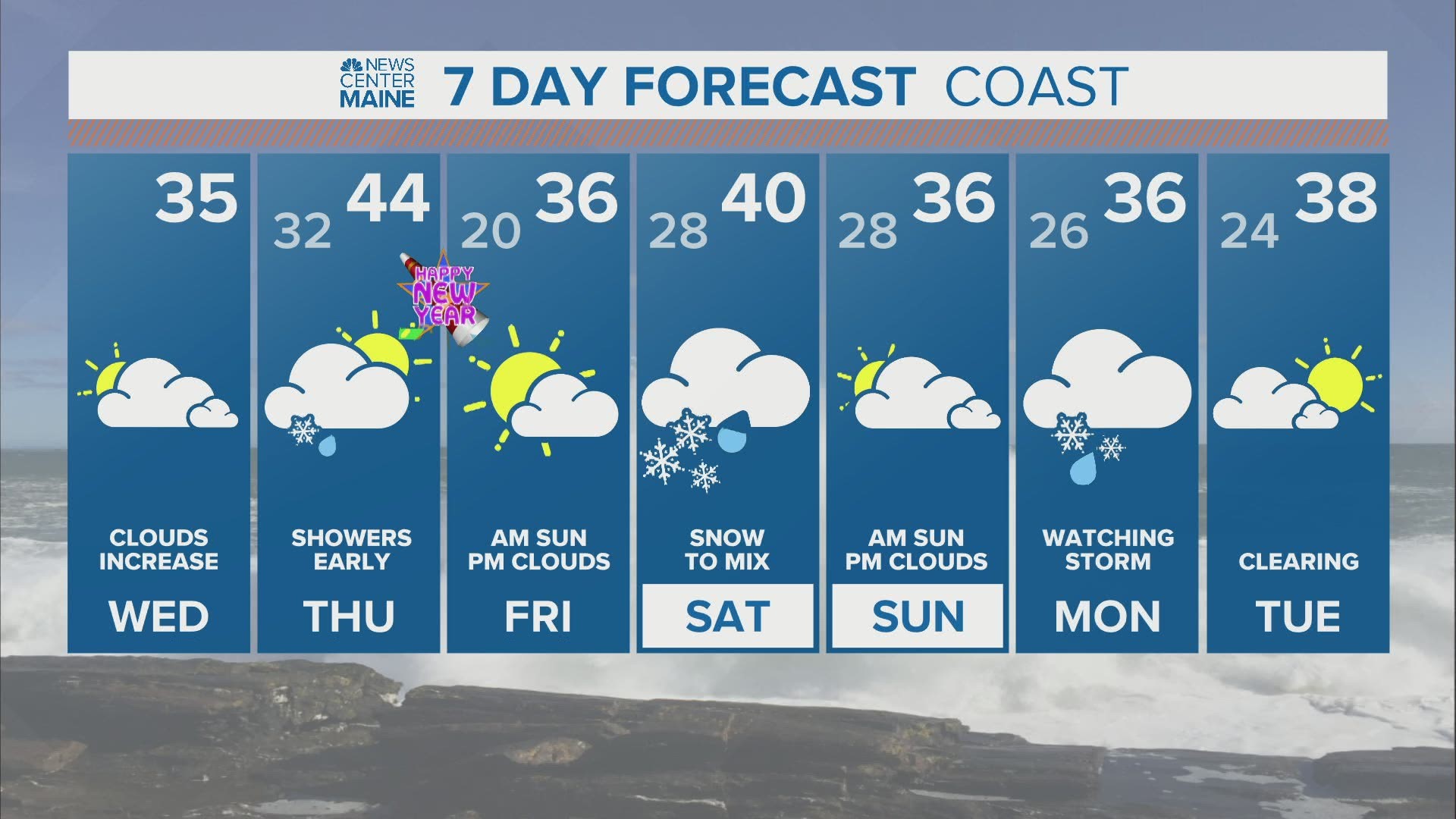 MAINE, USA — The Christmas rainstorm and the fairly mild weather that's followed it has done a number on our winter sports - especially those that rely on only natural snow, like snowshoeing, cross country skiing and snowmobiling.

There are chances in the days ahead though, a sign that even a mild weather pattern this time of year can produce snow in Maine.

A weak system moves through with very little in southern Maine - just some snow and rain showers.

But along and north of Route 2, into central and northern Maine, the precipitation will be a bit steadier and mostly snow. 1-3" of accumulation is expected, and especially north of Bangor there will be some slippery travel early Thursday morning.

A cold front will move offshore Thursday morning and the afternoon will actually turn out to be sunny with temperatures hitting 40 in many spots.

The first of possibly two storms comes on Saturday. It's slowed down slightly, so I think we get all of Friday in with no issues.  The morning will be bright and sunny, with clouds thickening up in the afternoon and evening.

I'm thinking almost all of the state will start with snow late Friday night and early Saturday morning - beginning just after midnight in western Maine and probably not until closer to sunrise in far eastern Maine.

This is not a very strong system, but it will bring steady snow and likely a changeover to a brief mix or rain in southern and coastal Maine. I'm not too concerned about icing with this one, though a little sleet or freezing rain will be possible inland.

The bulk of this comes Saturday morning into early afternoon, with the precipitation ending from west to east during the afternoon.

It's still three days away, so I'm uncertain how much snow will fall before the changeover to rain in southern and coastal Maine. Perhaps a coating to 2" as a first estimate near the coast. I feel pretty confident that 3-6" of snow will fall in the mountains, hills and much of interior Maine, though less than 3" is possible in the far north depending on the storm's track. Keith and Jess will have more specifics later today, but here's my early thinking.

Now Monday's on my mind. Yesterday morning I mentioned we needed to keep an eye on this, but almost all of the guidance kept it far enough south and east that we wouldn't see anything. There has been a trend in the last 24 hours to bring it closer to us. This is a highly uncertain forecast - each "L" on the map below represents one model location for the center of the storm. Some are quite close and would bring several inches of snow (and even a change to rain at the coast), others are a complete miss. I'm not locking in this storm but I'm not writing it off either. There's simply too much uncertainty right now, and it will come into focus in the next day or two. But there's reason for snow lovers to be optimistic.