Maine weather brews up potential torrential rain, strong wind gusts, and hail are on the table as storms fire up this afternoon. 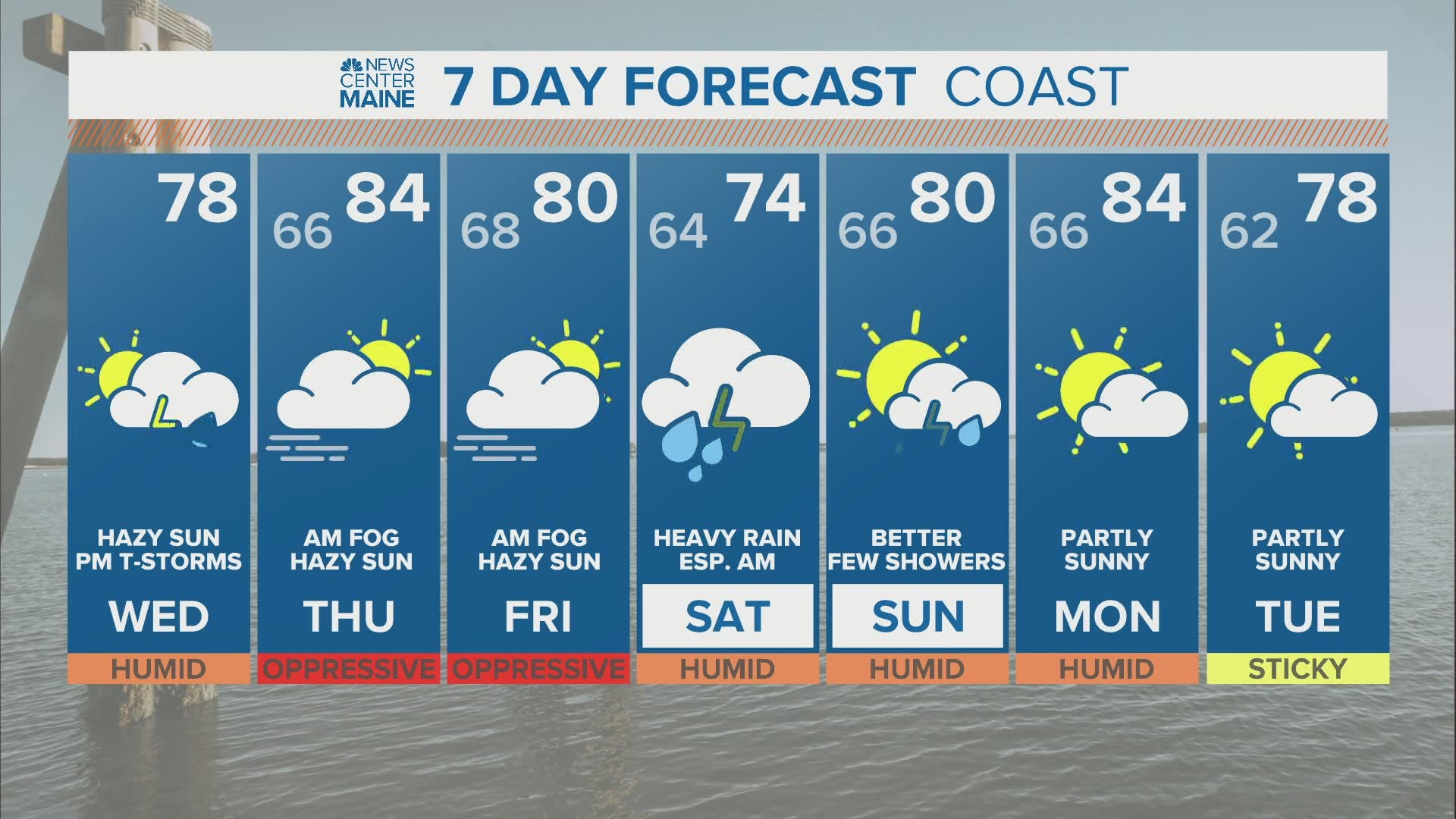 Scattered thunderstorms are expected in Maine this afternoon and evening. As they fire, some storms will be strong to severe, with increasing coverage close to the evening rush hour.

There is already a line of showers and storms moving through Maine. These are going to roll through and clear out through the later morning or early afternoon. As they do, the atmosphere will recover, with energy building back in.

Humidity will continue building throughout Maine. Higher dew points and increasing temperatures are the keys to storm energy.

Mostly cloudy skies will help to limit that a little bit, but any breaks of sun could allow for a bit more localized energy.

By 1 p.m., storms will start to fire up in the western mountains.

Ingredients for strong thunderstorms are most favorable in areas shaded in yellow, but anywhere in dark green has a chance at seeing severe warned storms.

Credit: NEWS CENTER Maine
The biggest risk for severe storms is in areas highlighted in yellow, but strong storms will be possible through most of Maine and New Hampshire.

A line of thunderstorms is expected to build over the western Maine mountains in the early afternoon. As they fire, there will be plenty of energy for them to use, plus enough wind shear to help them organize into stronger or severe storms.

They push southeast, moving down into the foothills and closer to the coastline through the afternoon and evening.

By 5 o’clock, some of the busier roads in Maine will be under the threat for heavy rain and strong wind gusts. Reduced visibility is expected under any thunderstorms. This also increases the risk of hydroplaning, as ponding will likely occur with torrential downpours. Storms will be approaching the I-95 corridor from Portland to Bangor.

Credit: NEWS CENTER Maine
By 5 o'clock, heavy rain will be moving along sections of I-95, especially away from the coastline. This will have impacts on the evening commute.

The strong thunderstorms will move off the coastline around 7 o’clock. There could be some lingering showers or a few rumbles after that, but the threat for severe weather will be over.

Credit: NEWS CENTER Maine
Other than some lingering showers or a weak storm, most Mainers will be clearing up. The humidity is expected to linger into the weekend.

Heavy rain is likely under every storm that fires up. Since storms will be moving pretty slowly, areas of poor drainage could be dealing with high water when the storms push through.

Lightning will also be a big factor in these storms. Make sure you have a place to seek shelter if the storms end up over you.

The next biggest threat will be strong wind gusts. Even for storms that do not end up being warned, stout gusts could cause some isolated damage across the area. I don't expect widespread power outages, but a couple of issues are definitely possible.

Credit: NEWS CENTER Maine
The biggest threat is heavy rain and strong wind gusts, but some hail or a brief spin up tornado cannot be ruled out.

Last, but certainly not least, is the tornado threat. I think the threat is low today...but not zero.

When we have a warm front in the vicinity, we end up with just a little bit of extra rotation in the winds with height. In other words, the atmosphere has just enough extra spin to cause concern for a brief spin up. While the chances are low, they do exist, especially south of the mountains and into the foothills.

These threats are a bit lower right along the coastline, as the cooler and more stable marine air will help to limit the severe thunderstorm chances.

The severe risk is over tonight. Expect some fog to develop as well as a few lingering showers before midnight. Otherwise, Thursday looks like a much quieter weather day.

Keep an eye to the sky this afternoon and make sure you have a plan for severe weather safety. It's a good idea to keep phones charged, too, so you can stay informed if you lose power.

You can always follow me on Twitter and Facebook for the latest updates, as well as Jess, Keith, and Ryan. We will all be posting as the thunderstorms move in.

Stay safe and have a great day.