Snow showers continue on Monday, but the main part of the storm is Tuesday. 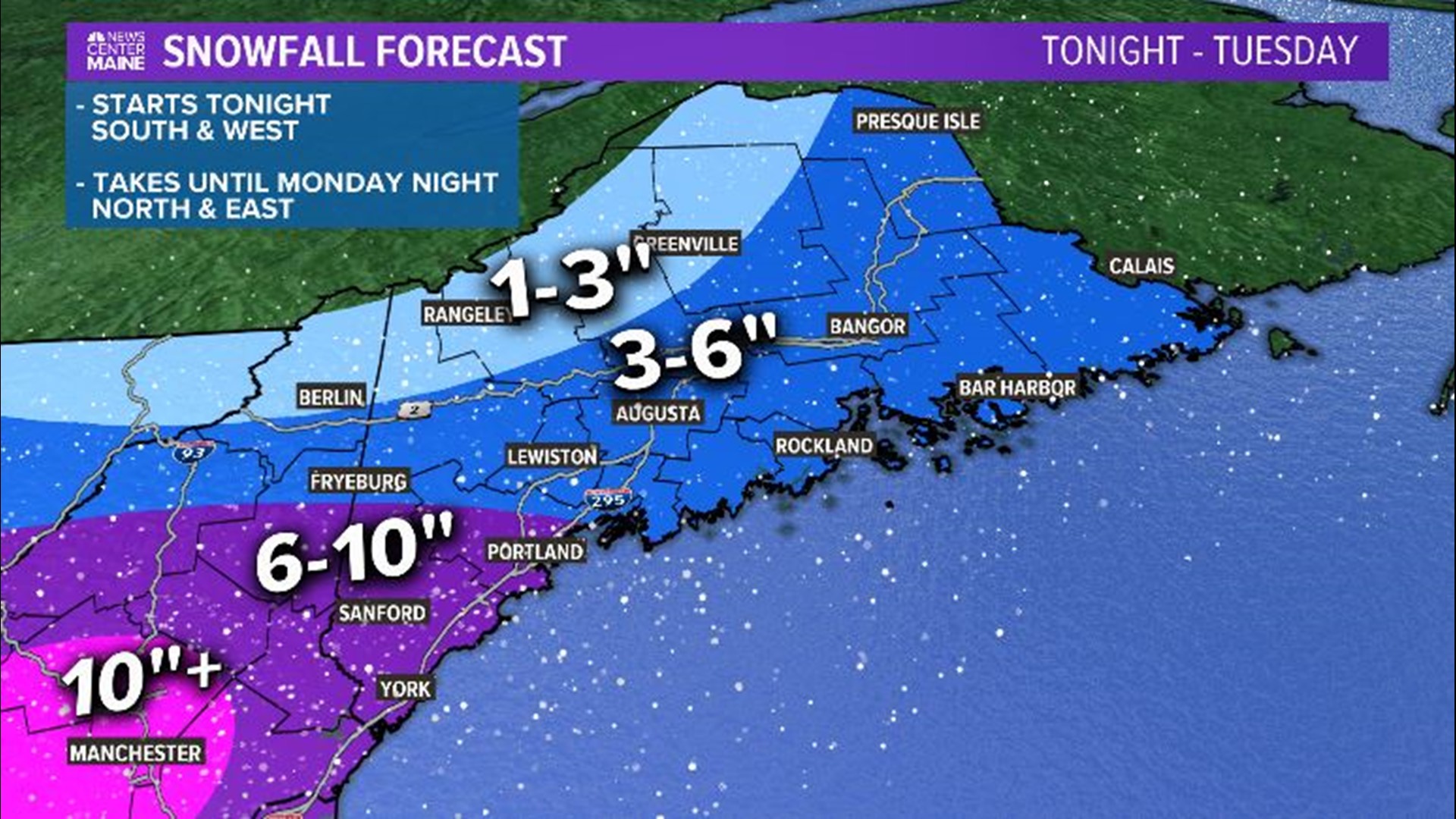 MAINE, USA — New England is getting its fair share of snow already, and next up on the list to see snow is Maine. In fact, snow started in southwestern Maine and will continue into Monday morning.

If you want to see Mike Slifer's full detailed forecast, check out the YouTube video at the end of the story.

Early snowfall totals through York county approach 2-4" by Monday morning. The commute will see impacts from the Portland metro area and south.

Due to plenty of cold air, the snow will start to stick as soon as it reaches the ground.

Moisture moves north and snow falls from Fryeburg to Lewiston after the morning commute.

The evening commute will be a bit slicker closer to the US 2 corridor, but issues will still be mostly isolated in nature outside of southwestern Maine.

Credit: NEWS CENTER Maine
Most of the impacts to the Monday morning commute will be in southwestern Maine.

Credit: NEWS CENTER Maine
As snow spreads north, the evening commute will see more impacts on Monday than the morning.

This first wave of snow mostly impacts southern Maine and steady snow breaks apart into isolated and scattered snow showers Monday evening. Totals do not climb much in the afternoon, yielding snow amounts of up to 4" by Monday night. Border towns near New Hampshire may be slightly above 4".

Notice how localized the first snowfall is. This is a long duration event, so even though it's mostly focused over southwestern Maine to start, it does not end up that way.

This first shot of snow is just the appetizer to the main event. A coastal low develops and swings through the Gulf of Maine, bringing plenty of snow through the state on Tuesday.

Commute impacts will be felt statewide on Tuesday morning. As wind gusts pick up, blowing snow becomes a concern. Not only will slick roads be a problem, visibility will get reduced.

This will likely be the worst part of the storm. Snow will be heavy at times and accumulate quickly. Travel will be impacted quite a bit on Tuesday in Maine.

Credit: NEWS CENTER Maine
These are the forecast totals for the entire long duration event from Sunday night into Tuesday.

The totals above are through Tuesday, starting on Sunday. In other words, this what everyone sees after all is said and done. It will be an additional 4-6" for most of southwestern Maine. Fryeburg to Lewiston will pick up another 2-4" Monday into Tuesday.

As the system exits, blowing snow remains a concern. Even after the snow wraps up, this makes it difficult to keep roads clear. It's important to exercise caution into Wednesday.