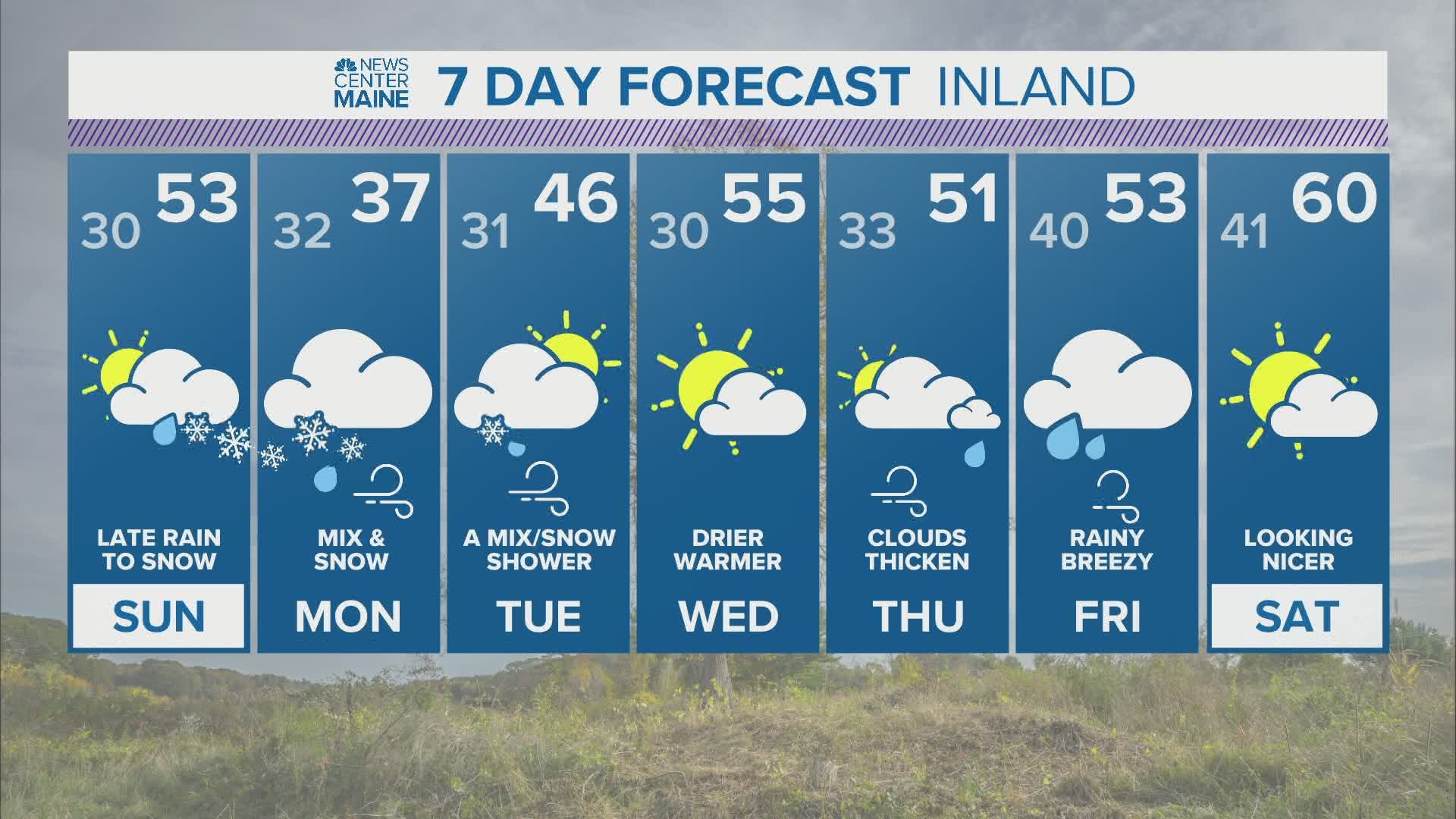 MAINE, USA — As we round out the final week of April, another snowstorm looms. While this one will not drop quite as much as the last one, it still could be enough for some isolated power outages.

A large storm system is spinning over the midwest and is going to trek towards Maine on Sunday.

Sunday morning looks pretty tranquil; the calm before the storm, if you will.

Some filtered sunshine eventually gets covered up by thickening clouds.

It will be chilly, but seasonable ahead of the approaching moisture. Most still make it to near 50, with some approaching the low 50s in northern and eastern Maine.

By Sunday evening, the western mountains will be first to see some rain showers.

These gradually build into Maine and will be generally light.

As the storm strengthens, the lifting (what actually allows the precip to occur) becomes intense. This will allow most of inland Maine to flip over to wet, heavy snow.

Snow showers are expected to continue overnight and spread east. This will cause snow to fall through the Bangor metro area as well, but it cuts off before reaching the County.

The forecast is a little less "clean" on Monday when it comes to precip type. There will likely be mixing taking place at the coast, with on and off rain and snow showers throughout inland Maine.

It will be a bit breezy during the day Monday, though not really enough for power outages to be a concern.

More cold air gets pulled in through the day on Monday, resulting in a switch back over to snow late Monday evening.

Most of the accumulation will already have occurred, but I'd keep watch for an extra inch or two when this happens.

Snow totals with this storm could change a bit as we get closer, but here are the latest totals.

Areas in the 3-6" range will be somewhat elevation dependent, so I wouldn't be surprised to hear of a stray 7" reading or two from high peaks. The same is true for some valleys that may slightly underperform.

In the Fryeburg area, watch for some power outages. With wet, heavy snow, 6" is generally the threshold for when power issues pop up.

There could be some stray outages elsewhere, too. Most of the outages that occur will be late Sunday into Monday morning.

Tuesday remains breezy and could allow for a couple more showers. In general, though, Sunday into Monday will be the most active.

Will this be the last snow map I make forecasting more than 6" before fall? Maybe, maybe not. The pattern - which we couldn't manage all winter long - is ripe for wet and cold. We'll just have to see what May brings.