Maine is getting ready for a soaking. While there will be a couple of stronger wind gusts, rain is the big story locally. 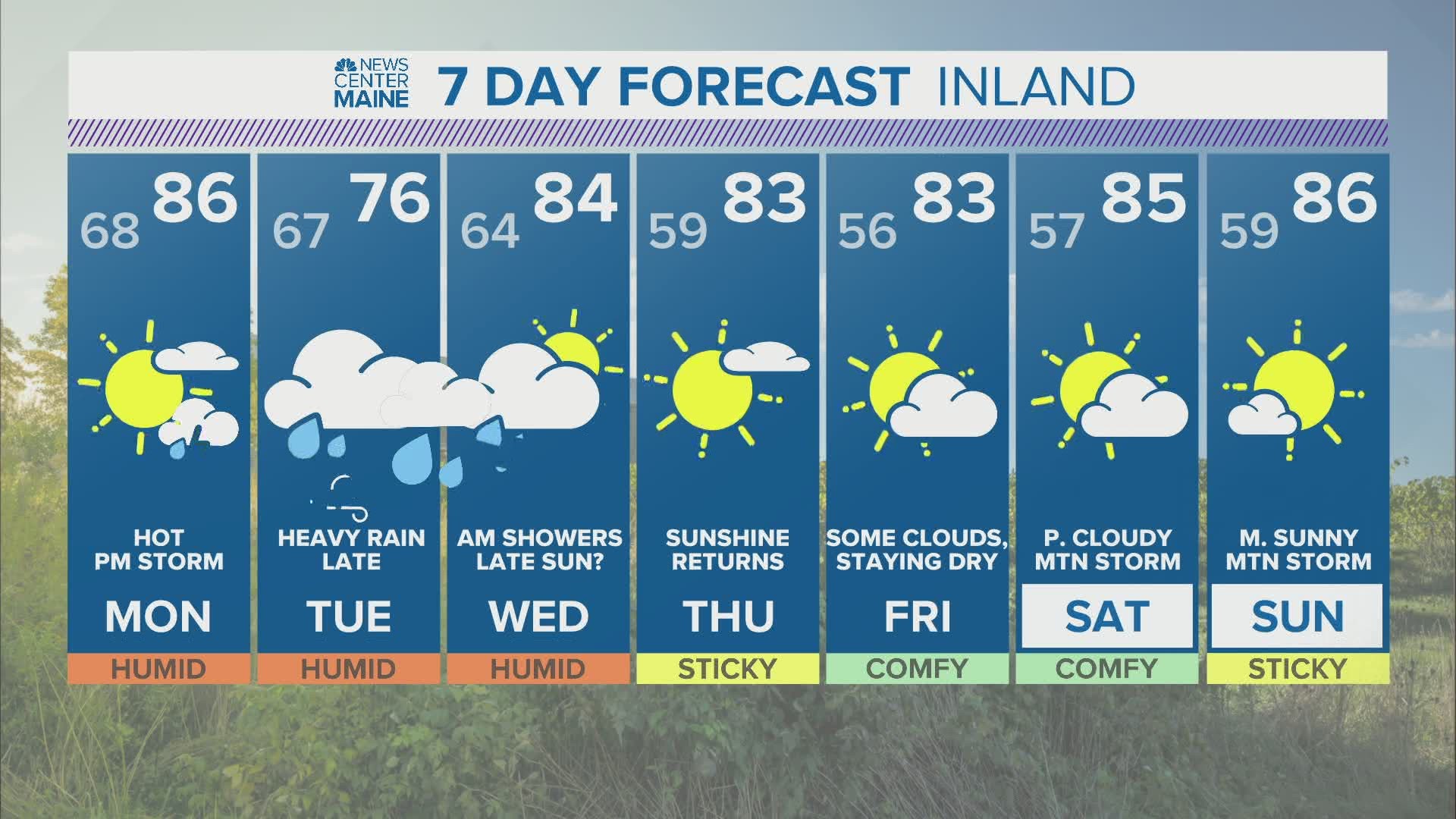 MAINE, USA — After a nice weekend, the pattern gets a bit unsettled. Heavy rain and some strong wind gusts are expected late Tuesday as Isaias rolls through.

Monday looks like a calm day, all things considered. It will be hot with building humidity. High temperatures range from the 80s to near 90 degrees. The best chance for a shower to pop will be inland, but most will stay dry.

It will be warm overnight into Tuesday, as cloud cover builds across Maine.

Tuesday starts off with overcast skies and a handful of showers. Moisture steadily builds in, allowing showers to continue through the afternoon. There will be some dry time mixed in between showers.

By the late afternoon, steadier rain starts to move in. This moisture is going to be pulled in out ahead of Isaias. Here is the latest from Sunday night on the storm.

The forecast has not changed much for track, but there have been some reductions in forecast intensity. This is the official forecast from the National Hurricane Center.

Credit: NEWS CENTER Maine
The official forecast still takes the core of the storm over Maine.

The forecast takes the storm up through New England. There are still a couple of possibilities with its track.

Credit: NEWS CENTER Maine
There are still some minor differences in the potential tracks.

A more inland track will result in a weaker storm overall. This would mean wind gusts will be on the weaker side, though we still would see tropical downpours.

Track two, which would push the center of the storm a bit closer to us, could have bigger impacts. Wind gusts would be a bit stronger, and there would likely be some coastal issues with rough surf and strong rip currents.

Either way, the storm is expected to move through late Tuesday and into Wednesday. This is when we will see our biggest impacts locally. With so much moisture to work with, some localized high water is possible. Widespread flooding is unlikely due to the recent drought conditions.

Credit: NEWS CENTER Maine
There could be some higher amounts mixed in here or there, but a lot of us will see a general 1-3" of rain.

My current thoughts on rain are a widespread 1-3" with some locally higher amounts in the mountains. This map is going to change a bit as we get the exact track of the storm figured out.

As a quick note, any rogue thunderstorms will have to be watched. There is a very small threat for a severe thunderstorm to get mixed in Tuesday. The chances are low, but there is ample wind shear, so if a storm forms it will rotate.

Credit: NEWS CENTER Maine
The strongest gusts are likely at the coastline.

This map may look a bit scary at first, but let me put it in perspective. These wind gusts are generally not strong enough to cause widespread damage, though some power outages are possible.

I also think that they will only happen over a short period of time, late Tuesday into early Wednesday morning.

The highest gusts will be along the coastline. I think it's unlikely that we see any gusts get into the 50 mph range.

As the storm speeds up, weakens, and moves away from Maine, sunshine returns. There could be a few breaks of sun as early as lunch Wednesday, though chances will increase later in the evening.

The incoming soaking rain will put a decent dent in our rain deficit. Drought conditions are still found through the majority of Maine.

The quick overview is summed up nicely below: