Rainfall rates could approach or even exceed 2" an hour, leading to potential flash flooding. 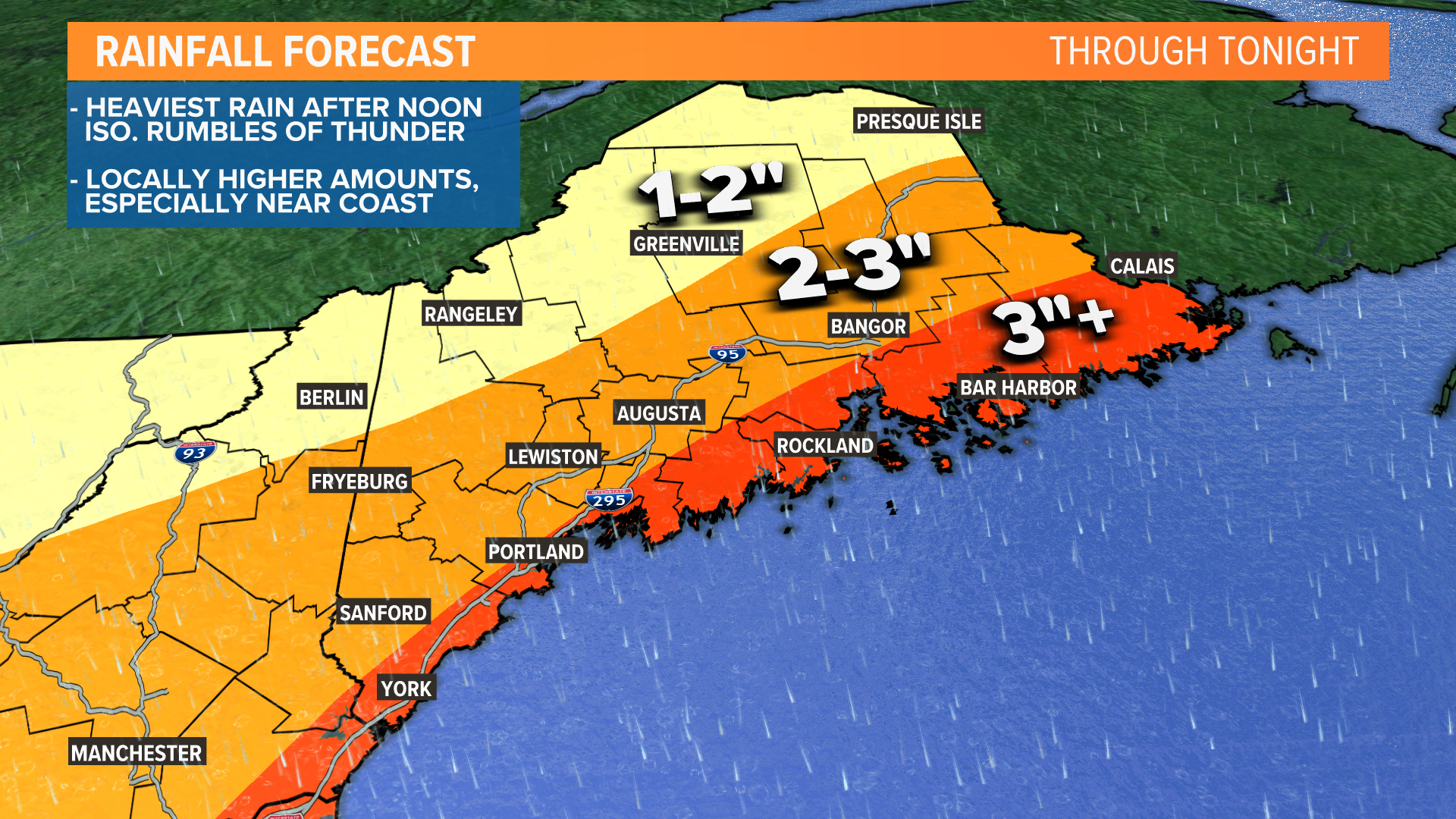 MAINE, USA — Elsa is quickly moving up the east coast, traveling over 30 mph toward Maine. Behind it, communities have dealt with flooding, wind damage, and even some isolated tornadoes.

Our biggest threat is rain.

Torrential downpours continue this afternoon, especially along the coastline.

With rainfall rates over an inch an hour, sometimes approaching 2" or 3" an hour under the heaviest showers, isolated flash flooding is possible.

On the bright side, the strongest wind gusts will remain offshore. The entire storm system exits very quickly, too, with a small chance for a solid sunset in western Maine.

Flash flood watches remain in effect across most of Maine and New Hampshire. This means the ingredients for flash flooding are in place.

While wind is usually a concern for these storms, the strongest gusts should remain offshore.

Most coastal spots could see gusts up to 30 mph, with a couple of isolated gusts to 40 mph.

The foothills and mountains will also likely be in this range, but a stronger gust or two over 40 mph is still on the table.

Totals are highest at the coastline and do include the rain that fell yesterday. With heavy precip rates, most at the coast should end up with 3" or more total. This is expanded Downeast, as the area of heaviest rain expands.

Given the updated rain total forecast, I am expecting at least isolated flooding issues to pop up. Communities that are still recovering from the flooding Downeast a couple weeks ago should be extra-prepared.

They will generally be confined to areas of poor drainage and typical problem spots when we get heavy rain. Some examples include low-lying areas along the coastline, urban regions where drainage cannot keep up with the rainfall rates, and spots that became saturated after Saturday's rain.

Around noon, the first heavy rain band will be moving onshore across coastal New Hampshire and southwestern Maine.

By 3 o'clock, the heaviest rain will have shifted east. Expect showers to become quite heavy around this time along the Midcoast, up to Augusta, and back down toward Portland.

There will also be some wicked heavy rain Downeast, possibly as far north as Houlton in Aroostook county.

Given the coverage of the heavy rain, expect totals across most of Hancock and Washington counties to approach or exceed three inches.

The rain wraps really quickly this evening. By 9 o'clock, a few lingering showers Downeast will be the only thing remaining behind Elsa.

Skies may clear so quickly that western Maine ends up with a good sunset!

The weekend is still looking pretty nice, too. Hopefully we can get through today with no big issues.

You can download the NEWS CENTER Maine app to get push alerts based on your location should any flash flood warnings be issued.

Track the storms at home with our interactive radar, too.

If you can safely send pictures of the storm, we'd love to see them. The best way to get them to us is through the "Near Me" section of our app.