Another strong storm is brewing as Mainers rebuild from the last one. This time, it's rain and wind, not snow. 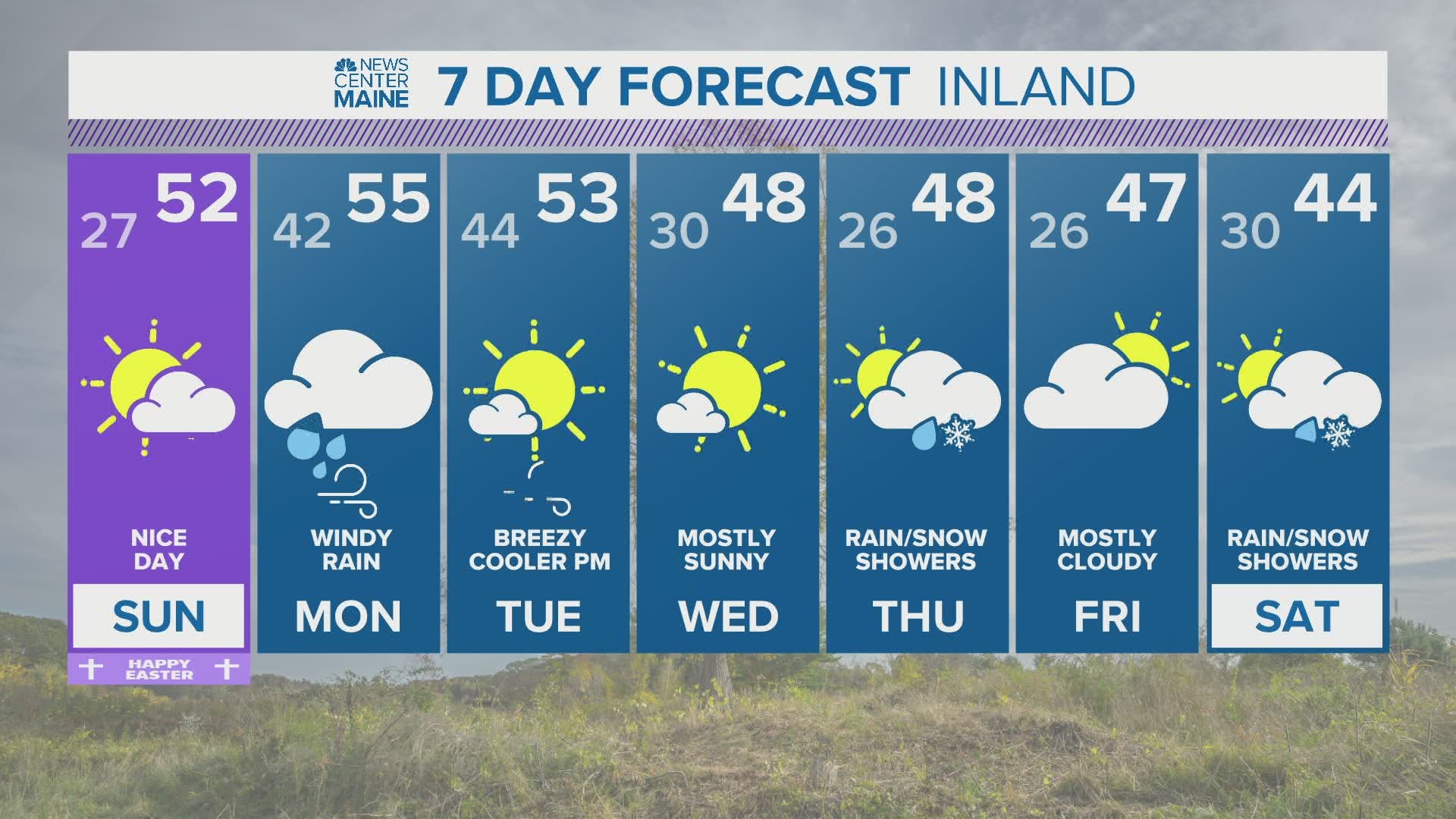 MAINE, USA — Another storm is slated to hit Maine on Monday. This time, the threats are strong wind gusts and heavy rain. No snow in the forecast for this one.

Some localized flooding is a possibility with this storm. Rivers will have to be monitored across southern Maine and ice jams could be a possibility across the northern part of the state. It also looks like power outages could be an issue with the strong winds, unfortunately.

This is not ideal timing at all. At the time of writing this, there are still over 75,000 reported power outages in Maine.

Let’s talk about the forecast and what to expect.

Credit: NEWS CENTER Maine
Strong storms will fire in the south on Sunday. It will be a pretty nice day in Maine.

On Easter Sunday, quiet weather will be found throughout the northeast. It actually looks like the nicest day in Maine for the next week. In the Deep South, though, a severe weather outbreak will be ongoing.

The associated storm system moves north and through the Great Lakes region.

Credit: NEWS CENTER Maine
The storm moves over the Great Lakes. Heavy rain, strong wind gusts, and maybe some thunder are in the cards in Maine Monday.

As the storm develops to our west, we end up with enough energy for a round of heavier rain and maybe even some thunder on Monday morning. It also brings a good bit of warmth with it. The whole state jumps well into the 50s.

Wind gusts pick up through the morning, too. By the later part of the day, some wind gusts could exceed 40 mph. The strongest gusts are likely along the coastline and through the higher elevations.

Still, a couple of stronger rogue gusts will be possible anywhere through the southern half of the state.

RELATED: Storm prep in the time of the coronavirus, COVID-19

Typically, we look at the 45-55 mph range as when we start to see issues related to power outages.

Rain will keep pushing east, and wraps up across eastern Maine late Monday night. Wind gusts follow suit, though it will still be breezy on Tuesday.

With 1-1.5” of rain in the forecast and a good amount of snow melting, rivers will have to be monitored in southern Maine. Northern Maine could see some ice jam issues if enough melting occurs.

Credit: NEWS CENTER Maine
A drier day on Tuesday as the storm exits, but it will still be breezy.

Tuesday brings the sunshine back. It will be a bit cooler in the afternoon and it will be breezy, too.

Another storm system slides to our south Wednesday. The remainder of the week will feature temperatures below average and a few chances for showers. Thankfully, we get at least a little bit of a break after Monday’s storm.

It’s important to have a plan in case you lose power. For some Mainers, this could be the second time losing power in less than a week.

Expect more details over the next day or so.

Follow me on Twitter or Facebook for other forecast information. I also sometimes upload pictures of my corgi, which is arguably more interesting than the forecast, and she is definitely cuter.