The Grinch storm of 2020 still on track for strong wind gusts, heavy rain in Maine

No changes to the forecast, unfortunately. Power outages and potential flooding still in the cards for Christmas Day. 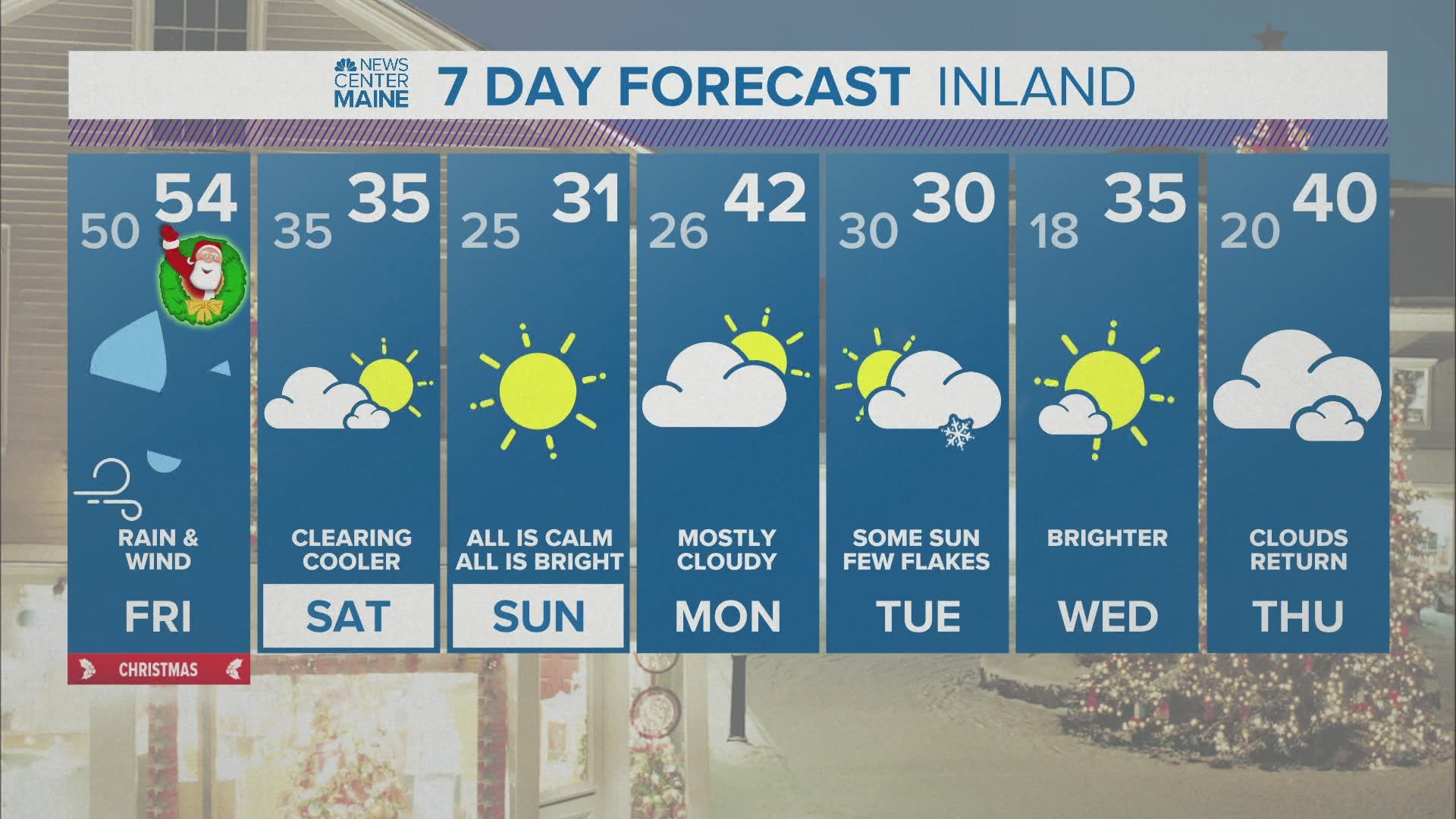 MAINE, USA — Then one foggy Christmas Eve, Santa came to say...well, you know the rest. Rudolph's nose will get a workout this year.

As has been stated before, this Grinch-mas storm comes in true 2020 fashion. At this point, dreaming of a White Christmas in New England will just lead to disappointment.

The latest trends for rainfall and wind gusts suggest the forecast is still on track. Expect the worst of the weather to come on Christmas Day.

Showers and storms are racing through the Midwest and firing along the Appalachians at the time of writing this blog. That's all headed for Maine, where the warm front has passed and temperatures are starting to climb.

Along south facing slopes, rain showers will be ongoing. Some could be moderate to heavy at times, though heavier rain is likely later.

By early Friday morning, the radar fills in as showers take over.

Steadier and heavier rain is likely in the mountains, given the increased moisture transport.

Certainly possible Bangor will end up near/over December dew point records tomorrow, almost all of which have been set in the last 20 years. Best chance to see a record fall will probably be during the 4 and 5 p.m. hours #NCMwx pic.twitter.com/xIekjLOMeN

As a side note, dew points could easily get into the mid-50s. While not unheard of, it's definitely above normal! Both Bangor and Portland have dew point records for December in the upper 50s.

The heaviest rain will pass with a squall line in the early afternoon on Friday. With this squall line comes the strongest gust threat as well as the chance at some thunder. That's right, Christmas Day thunderstorms. Fog will also still be around for the holiday.

Colder, drier air wastes no time moving in Saturday. In fact, there's some freeze potential for areas that do not dry completely before the cold air moves in. Watch out for any icy patches that develop. Highs make it into the 30s Saturday.

The strongest gusts will occur late Thursday night through Friday afternoon. The shoreline is still poised to make it into the 50-65 mph range. It would appear that the strongest gusts may be possible just inland of the immediate coast.

Bangor, Augusta, and Lewiston-Auburn are on the cusp of the 50 mph gusts, too. Areas north will see lower gust potential, except for some of the highest peaks.

High wind warnings have been issued for coastal sections of York, Waldo, and Cumberland counties, along with all of Sagadahoc, Lincoln, Hancock, Washington, and Knox counties.

Southern Penobscot County is also now under a wind warning, including Brewer and Bangor. Gusts here are still expected to top out in the 50-65 mph range.

Side note: Gusts on top of Mount Washington should make it to between 120 mph and 140 mph, which is wicked strong, but not a record.

Generally, outages appear like they will be isolated to scattered. I am expecting outages with this storm, especially near the coastline.

Remember to give plenty of space for generators and space heaters.

With a widespread 1.5-2.5" of rain on the way, and all the water that gets added in from the melting snow, rivers and streams could be a bit swollen through the weekend.

The mountains are in the bullseye for rain. South facing slopes will likely pass 3" of rain, and some spots might even get close to 4".

We'll be watching river levels closely through the weekend.

Quick look at Bangor and Portland's Christmas stats before I leave. The record high in Portland looks safe, but I could see Bangor breaking the record. Possibly by a few degrees, depending on how it all shakes out.

No snowfall records being set this year.

RELATED: And you didn't think 2020 could blow any harder