Rain and wind gusts of up to 50 mph blew leaves and limbs off trees all across Maine.

A man was seriously injured after a tree fell on his car in Windham Friday morning, according to police. Norman Rawding, 65, was driving down River Road in the area of Page Road around 7:20 a.m. when a tree fell and trapped him inside. Rawding was taken to Maine Medical Center in critical condition.

The City of Bangor says Emera crews are working to restore 13 downed transmission lines just in that city that has 6,300 customers without power.

The storm forced some schools to close Friday, among those, the University of Maine.

University officials said travel conditions in and around the campus led to the decision to close classes until 5 p.m. Friday afternoon.

Roads from all over Maine were closed due to downed trees and power lines. Authorities are stressing how important it is for people to be cautious driving in these conditions.

The Dover Foxcroft Police Department used the old CMP line about safety around wires, "NO LINE IS SAFE TO TOUCH, EVAH. There are multiple trees down and our personnel are limited at best at the moment. (They are also unshaven, the officer, not the trees.)"

Things were no better up and down the Eastern Seaboard.

Hundreds of thousands of customers lost power as wind and severe thunderstorms raked the Eastern Seaboard.

At least 420,000 customers from South Carolina up to New England and in Ohio were without power just before midnight Thursday, according to outage maps for electric utilities covering 16 states and the District of Columbia. The National Weather Service warned that "severe thunderstorms capable of damaging winds and torrential rainfall will continue to push through" the northeast U.S. overnight, possibly accompanied by downed trees, flooding and more power outages.

Several tornado warnings were issued overnight, including for parts of New Jersey and Pennsylvania, southeastern Virginia, and eastern North Carolina.

Colder temperatures and gusty winds in the region were likely for Friday, the National Weather Service said. Storms with heavy rain and strong winds swept the central United States — from the Gulf Coast to the Great Lakes — on Thursday ahead of an arctic blast that forecasters said could bring near-record cold to the South.

Trees were toppled in the western Carolinas and Tennessee, where news outlets reported at least five people were injured when trees hit vehicles. Tornado watches during the day stretched from South Carolina to northern Pennsylvania.

At least 80,000 homes and businesses were in the dark because of intermittent power outages from Louisiana to West Virginia midday Thursday. A freeze warning reached across more than dozen states, from southwestern Texas into the South and Midwest. Overnight lows could dip into the upper 20s in parts of the Deep South, forecasters said.

A blanket of snow caused travel problems in Illinois, meanwhile, with snow forcing the cancellation of more than 200 flights at Chicago's international airports. 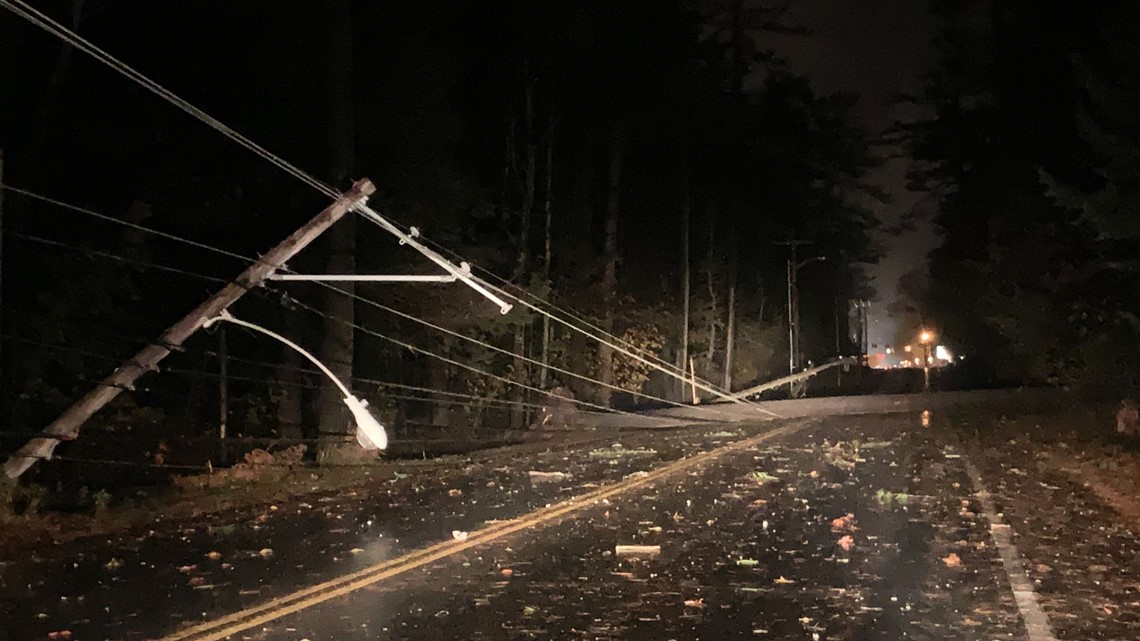 As much as 3 inches (5 centimeters) of snow driven by 50 mph (80 kph) winds was predicted around the Great Lakes.

The storms provided another round of drought relief across the Southeast after weeks of dry weather endangered crops and increased fire risks. But a new federal report showed much of Alabama, Georgia and South Carolina are still too dry.