No statute in Maine on clearing snow from roofs of vehicles

Unlike Jessica's Law in New Hampshire, Maine only has laws about clearing snow, ice from windows of vehicles

A woman from Bath has a winter weather warning for drivers. Clear the snow and ice off your car or truck, or what happened to her could happen to you.

Amanda Kimball was with her three daughters on I-295 near Freeport Friday. She was driving her oldest daughter to the Portland Jetport when a sheet of ice flew off of a box truck in front of her and smashed her windshield.

"It was almost like we were in a bubble," Kimball said. "I could see it fly-off and I knew the distance I was from the truck and I knew it was going to hit the car."

RELATED: Driver reminds others to clear snow from vehicles after a scary encounter

Kimball managed to maneuver the car into the breakdown lane. Besides finding small pieces of glass later on, Kimball and her daughters were all OK.

Maine does not have any laws on clearing snow or ice from an entire vehicle.

29-A MRS §2082 states, “A person may not operate a vehicle with a sign, poster, opaque or semitransparent material or substance on the front windshield, side wing or side or rear window that obstructs the operator's clear view of the way or an intersecting way.”

New Hampshire has Jessica's Law, named after a woman who was killed after ice falling from a truck caused a deadly crash.

With Maine is expecting more snowfall Tuesday, Robert Skehan, director of the Office of Safety for the Maine Department of Transportation, recommends planning ahead before making the commute.

"Take care of the snow and ice on your vehicle, but also plan time because you’re not gonna be able to go the normal posted speed limit," Skehan said. "Make sure you arrive where you’re going safely.”

Skehan says to prepare your car in case of an emergency or mechanical issue. Here is a recommended list of items to leave in your vehicle in the event you are stranded in the cold weather.

If you find yourself in a situation where your car is in the snow make sure the tailpipe is clear to prevent carbon monoxide poisoning. 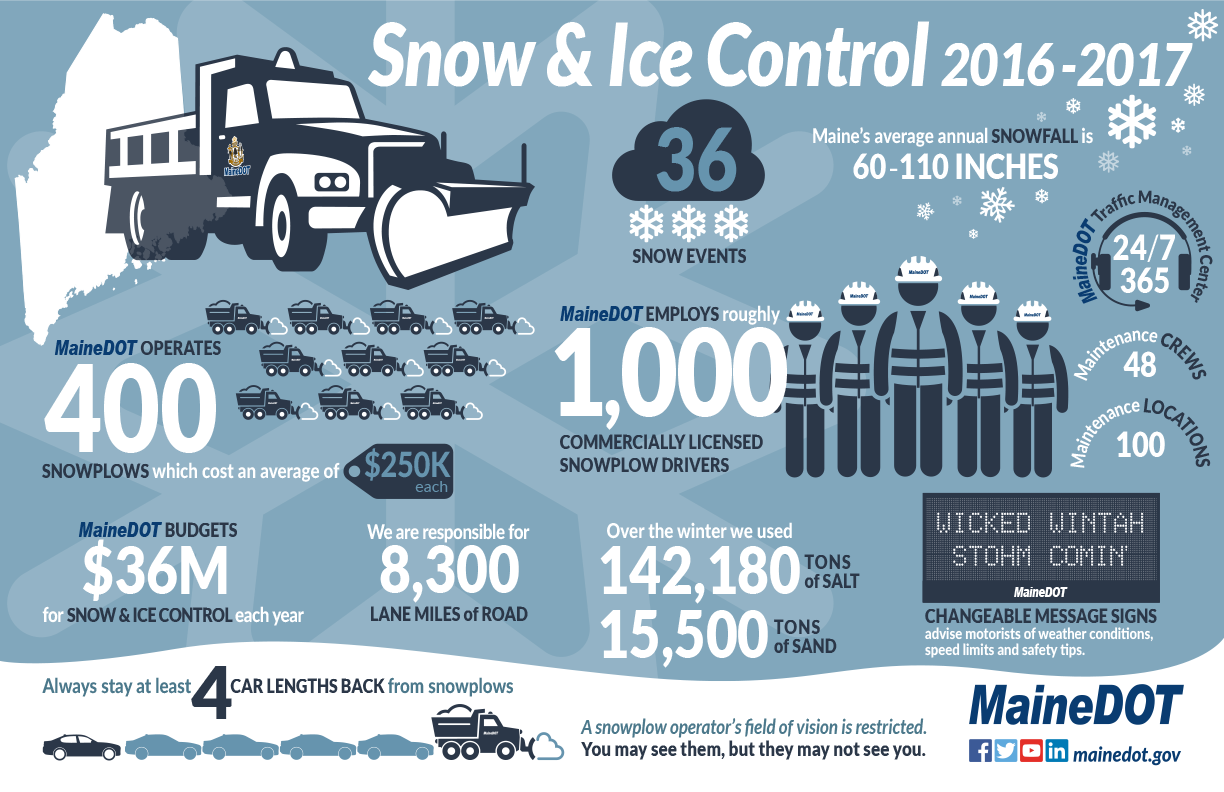 Winter Driving Tips | MaineDOT
At MaineDOT, we try to do our part to keep the roads safe. MaineDOT has a fleet of roughly 400 plow trucks that are used to control snow and ice on approximately 8,300 lane miles of Maine's state roads. MaineDOT snow fighters are some of the most talented and dedicated professionals in the business.

More winter driving tips can be found on the MDOT website.