TROPICS: No threats to the First Coast for the next week 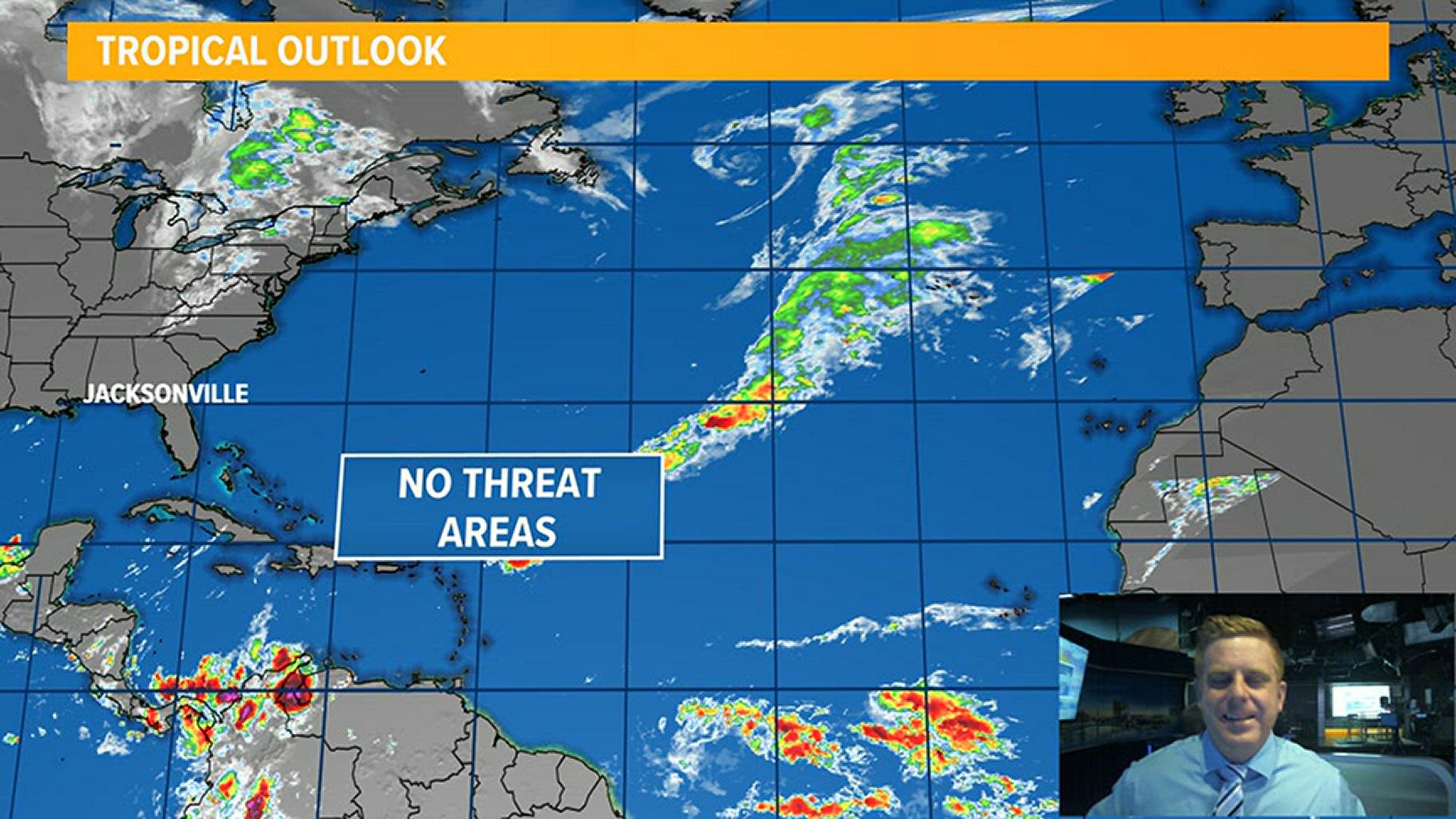 JACKSONVILLE, Fla. — The tropical area in the Caribbean has been dropped by the National Hurricane Center as an area of invest. That means today we have no threat areas to really speak of across the Atlantic.

October tropical systems tend to develop across the Caribbean Sea or the Gulf of Mexico where the sea surface temperatures are still very warm. There is historically a second peak in the middle of October, so make sure you stay vigilant and prepared. You don't want to let your guard down just yet. The Atlantic hurricane season ends on November 30.

From the National Hurricane Center recapping the month of September: "Tropical cyclone activity in the Atlantic basin during September was above normal in terms of the numbers of named storms, and major hurricanes. Nine named storms formed in the Atlantic basin in September, with three of them becoming hurricanes, and two of those becoming major hurricanes. Larry was a long-lived category 3 hurricane that ultimately made landfall in Newfoundland as a Category 1 hurricane, while Nicholas made landfall near Sargent Beach, Texas, as a Category 1 hurricane. Based on a 30-year climatology (1991-2020), four named storms typically develop in September, with three of them becoming hurricanes, and one of those becoming a major hurricane.

In terms of Accumulated Cyclone Energy (ACE), which measures the strength and duration of tropical storms and hurricanes, activity in the basin so far in 2021 has also been above normal, almost 50 percent above the long-term mean. The 20 named storms through the end of September is well above the 30-year (1991-2020) average of 9 to 10 named storms by the end of September."

Credit: WTLV
Areas of origin for tropical systems in October

“After a record-setting start, the 2021 Atlantic hurricane season does not show any signs of relenting as it enters the peak months ahead,” said Rick Spinrad, Ph.D., NOAA administrator. “NOAA will continue to provide the science and services that are foundational to keeping communities prepared for any threatening storm.”

Looking deeper into the season, the Climate Prediction Center has issued a La Niña Watch with La Niña potentially emerging through November. La Niña can help make atmospheric conditions more conducive for tropical cyclones to form the Atlantic, and less conducive in the Eastern Pacific. If 2021 is any indicator so far of what lies ahead this season, it could continue to be an active year.

Hurricane season is here and it's time to be prepared if you aren't already. Make sure you have had conversations with your loved ones about what you would do if a storm were to threaten.

Credit: WTLV
Sep 10 is the historical peak of the Atlantic hurricane season.

Hurricane safety and preparedness are critically important even before the season begins on June 1. NOAA’s National Weather Service provides resources to prepare for hurricane hazards and real-time updates about active weather systems from the National Hurricane Center at www.hurricanes.gov.

The Atlantic hurricane season officially runs from June 1 to November 30.