Hurricane Delta to strengthen as it blitzes across Gulf of Mexico 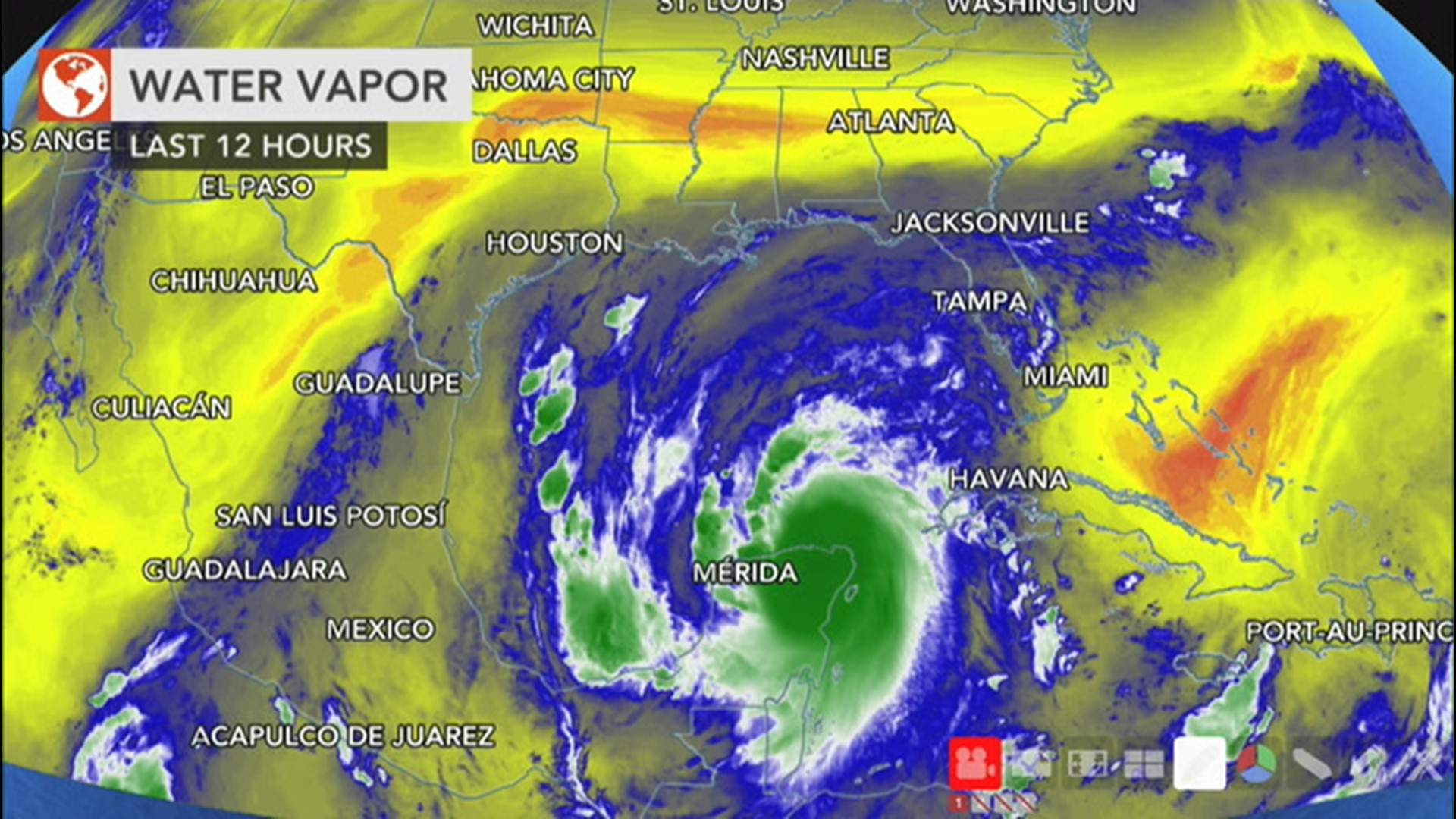 The storm-weary Gulf Coast, an area still reeling from back-to-back blows from devastating Hurricane Laura and more recently Sally, is bracing for yet another strike, this time a potentially disastrous one from Hurricane Delta. The formidable hurricane crashed onshore in Mexico early Wednesday morning, cutting power and causing damage along its path, but losing wind intensity as it moved over land. Forecasters warned that the hurricane is expected to regain strength and return to major hurricane status as it emerges over the warm waters of the southern Gulf of Mexico and begins barreling toward the U.S. coast.

Delta weakened overnight as it tracked closer to the northeastern part of the Yucatan Peninsula, eventually making landfall in Mexico around 5:30 a.m. CDT Wednesday near the town of Puerto Morelos, south of Cancun along the Riviera Maya. At the time of landfall, Delta was a strong Category 2 storm with maximum sustained winds of 110 mph, just 1 mph below major hurricane strength.

Maximum sustained winds had weakened to 100 mph by 1:00 p.m. CDT Wednesday as the storm raced northwestward at 17 mph after emerging over the southern Gulf of Mexico. The National Hurricane Center (NHC) said that an Air Force hurricane hunter was currently en route to investigate the system.

Video of a wooden spear lodged into the rental car of Extreme Meteorologist Reed Timmer in Cancun, reporting for AccuWeather on Delta, showed the ferocity of winds lashing the region. Timmer reported pockets of extreme damage, including significant structural damage, in the region as he surveyed the scene on Wednesday morning, noting that Delta's winds were enhanced as they had funneled through buildings. He shared several videos showing complete destruction along the waterfront of Cancun. Timmer, who is staying at a secure concrete structure in the area, reported earlier Wednesday from the northern eye wall of Delta as sand was getting whipped into the air amid Delta's landfall. Power outages were also occurring in downtown Cancun, he said.

As Delta swirls over the warm Gulf waters, the hurricane will re-strengthen and grow in size prior to taking aim at the Louisiana coast with damaging winds, life-threatening storm surge and widespread flooding to end this week.

"Delta will take aim at the Louisiana coast on Friday where it is expected to bring a dangerous and life-threatening storm surge, heavy flooding rainfall, damaging winds along the coast as well as isolated tornadoes from Friday into Saturday," AccuWeather's top hurricane expert Dan Kottlowski said.

As Delta pushes inland after landfall in Louisiana during Friday night, cities such as Lafayette, Baton Rouge, and Alexandria, Louisiana, and Jackson, Natchez and Vicksburg, Mississippi, could be hit hard with damaging winds and flooding rain.

Some weakening is forecast prior to landfall in the U.S. late Friday, but a strike by a major hurricane is still expected in Louisiana with an AccuWeather RealImpact™ Scale for Hurricanes rated as a 3 based on the anticipated flooding rainfall, damaging winds, dangerous storm surge and a number of other economic factors. This scale, developed by AccuWeather, provides a more comprehensive outlook for impacts from tropical storms and hurricanes on land areas than the Saffir-Simpson Hurricane Wind Scale, which is based solely on wind speed.

"As Delta approaches the central Gulf Coast, it will start to encounter increasing wind shear and slightly cooler water, but the forward speed of Delta and the degree of shear it encounters will determine its wind strength at landfall Friday evening," Kottlowski explained.

Wind shear is the increase in wind speed with altitude as well as the sudden change in wind direction from one location to another. Wind shear and changes in the structure of the eye are some of the main challenges in forecasting the overall strength of hurricanes.

Delta is forecast to take a fairly steady west-northwest path into Thursday. Then, from Thursday to Friday, the hurricane is projected to begin a curved path to the north over the west-central Gulf. As the storm approaches the Louisiana coast late Friday, it may begin to turn more to the northeast.

Conditions are expected to deteriorate from Thursday afternoon to Friday afternoon along the upper Gulf Coast of the U.S. even well ahead of landfall and well away from the point of landfall.

"Delta's outer wind field will remain very strong and can grow in size over the Gulf of Mexico," Kottlowski explained.

Satellite images on Wednesday showed that the shield of clouds from Delta was growing and beginning to cover much of the Gulf of Mexico. Just 24 hours prior, the hurricane was extremely compact over the northwestern Caribbean -- and hurricane-force winds extended only 25 miles out from the storm's center on Tuesday.

"Regardless of a loss in wind intensity near the core, surge and wind impacts will still be potentially devastating along and near where the hurricane makes landfall along the central Gulf coast from late Friday to early Saturday," Kottlowski said.

Given Delta's current forecast track and strength, AccuWeather StormMax™ winds of 140 mph are forecast for part of southern Louisiana on Friday evening. However, this could trend higher depending on how much the storm strengthens over the central Gulf.

As is often the case with hurricanes forecast to make landfall, exact track and strength will determine the severity of impact in the region.

A fast forward motion may prevent Delta from weakening quickly prior to or upon landfall. The risk of damaging winds can extend well inland and result in not only a significant amount of power outages but also property damage. Trees may block streets and secondary roads. The power could be out for many days in some of the hardest-hit communities.

During Wednesday, Thursday and Friday, winds and seas will build over the Gulf of Mexico, especially in the central part of the Gulf. However, dangerous surf conditions are likely to develop throughout the Gulf of Mexico at midweek and remain dangerous with frequent and strong rip currents from Florida to Louisiana and Texas into the start of the weekend.

Storm surge watches were in effect from the upper Texas coast to the Alabama / Florida border on Wednesday, and a hurricane watch was posted for the northern Gulf Coast from High Island, Texas, on eastward to Grand Isle, Louisiana.

"It is possible the storm surge could be greater from Delta than from Laura, which was estimated to be 17.5 feet," Kottlowski added.

Delta's fast pace should prevent a repeat of staggering rainfall amounts and flooding from Harvey in 2017 or a lesser extent from Marco, Sally and Beta this year.

A general 4-8 inches of rain is predicted near where Delta makes landfall in the U.S. with an AccuWeather Local StormMax™ of 12 inches, but should Delta strike as a strong Category 3 or even Category 4 storm, which is possible, rainfall could be more intense along a portion of the Interstate 10 and 20 corridors.

Rainfall will tend to diminish as Delta picks up even more forward motion while taking a curved path to the northeast over the interior eastern U.S. this weekend. Despite the increasing forward speed, river and bayou flooding can be expected in part of the South, and there can still be localized urban and small stream flooding hundreds of miles inland as well as significant rises on the rivers in the storm's path over the Tennessee Valley, central Appalachians and mid-Atlantic region.

Hurricane Delta quickly strengthened into the second-most intense hurricane of the 2020 Atlantic hurricane season on Tuesday as its maximum sustained winds reached 145 mph. The only storm to become stronger this season was Hurricane Laura, which packed peak winds of 150 mph.

Also noteworthy was the storm's rapid pace of strengthening over the northwestern Caribbean on Tuesday. Delta's intensification was the most extreme in 15 years for an October hurricane. The storm's maximum sustained winds increased by a whopping 70 mph - from 40 mph to 110 mph - in its first 24 hours as a named storm. Only Hurricane Wilma in 2005 exploded in a more significant fashion over that same 24-hour period. Delta has also set a speed record for strengthening from a depression to a Category 4 hurricane. Delta accomplished this in just over 36 hours, surpassing Keith from 2000, which did so in 42 hours.

Forecasters warned the storm could undergo similarly explosive strengthening once over the Gulf of Mexico before it weakens just prior to landfall. U.S. officials aren't taking any chances with the storm and have been in full preparation mode this week.

State and local agencies were preparing in Louisiana, a state expected to endure its fourth direct landfall from a storm this season with Delta, including sandbagging and shoring up levees. Gov. John Bel Edwards began urging residents to prepare early on Tuesday and later on declared a state of emergency in Louisiana. He said the whole state is in the storm's possible path, and that residents need to stay tuned to forecasts and warnings from officials.

The coronavirus pandemic, which has been complicating hurricane response amid the extremely active hurricane season, will continue to create hurdles in the coming weeks. Coronavirus testing will be suspended on Friday and Saturday in Louisiana ahead of Delta's arrival, according to Edwards.

Alabama Gov. Kay Ivey declared a state of emergency midday Tuesday ahead of the hurricane, noting that coastal areas of the state are still recovering from Sally's blow in mid-September. Hurricane Delta "could potentially have a significant impact" on Alabama, she tweeted.

"Since 1964, there have only been three hurricanes to make landfall along the Louisiana coast during October," according to AccuWeather Senior Meteorologist and Forecasting Manager Dan DePodwin.

There are two major hurricanes that have made landfall along the Louisiana coast in October prior to 1964.