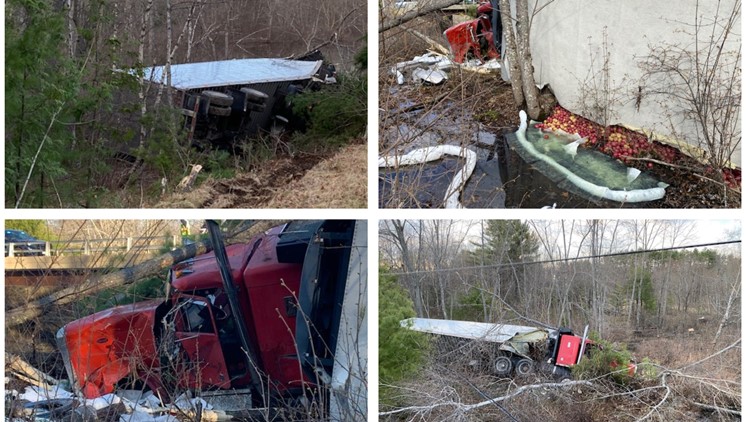 "The occupants of the truck as well as other motorists on Bridgton Road are extremely fortunate to have escaped this incident without serious injury."
Author: Griffin Stockford (NEWS CENTER Maine)
Published: 1:37 PM EDT May 4, 2020
Updated: 1:43 PM EDT May 4, 2020

FRYEBURG, Maine — Around 5:30 Monday morning, responders from Fryeburg's police, fire, and rescue departments responded to the 800 block of Bridgton Road (Route 302) for a reported tractor-trailer crash.

Joshua Hafford, 24, of St. Francis was driving a 1998 Peterbilt tractor-trailer loaded with seed potatoes when the truck crossed into the oncoming lane, left the roadway, and struck guardrails, trees, and a utility pole effecting internet/cable/phone lines.

The truck came to rest 75 feet from the roadway on the bank of a body of water known as Dead Lake Stream.

Hafford and his 20-year-old female passenger were uninjured during the crash.

"The occupants of the truck as well as other motorists on Bridgton Road are extremely fortunate to have escaped this incident without serious injury," Fryeburg Police Chief Joshua Potvin said.

State Police Commercial Vehicle Enforcement was on scene to assist, as well as Maine D.E.P., and Maine D.O.T.  Maine D.E.P. was called in to assist with the containment of fuel leakage into Dead Lake Stream, which is in the Saco River Floodplain.

Bridgton Road was closed or reduced to one lane for several hours while emergency crews tended to the scene.

"Driver fatigue appears to have played a major role in this crash. The driver reportedly fell asleep at the wheel after starting from Caribou at around midnight," Potvin said. "Specific details of the crash are still under investigation and charges may be forthcoming."