Touch down via a parachute-assisted landing is set for 10:55 p.m, Wednesday, Oct. 21 in the remote town of Dzhezkazgan, Russia. 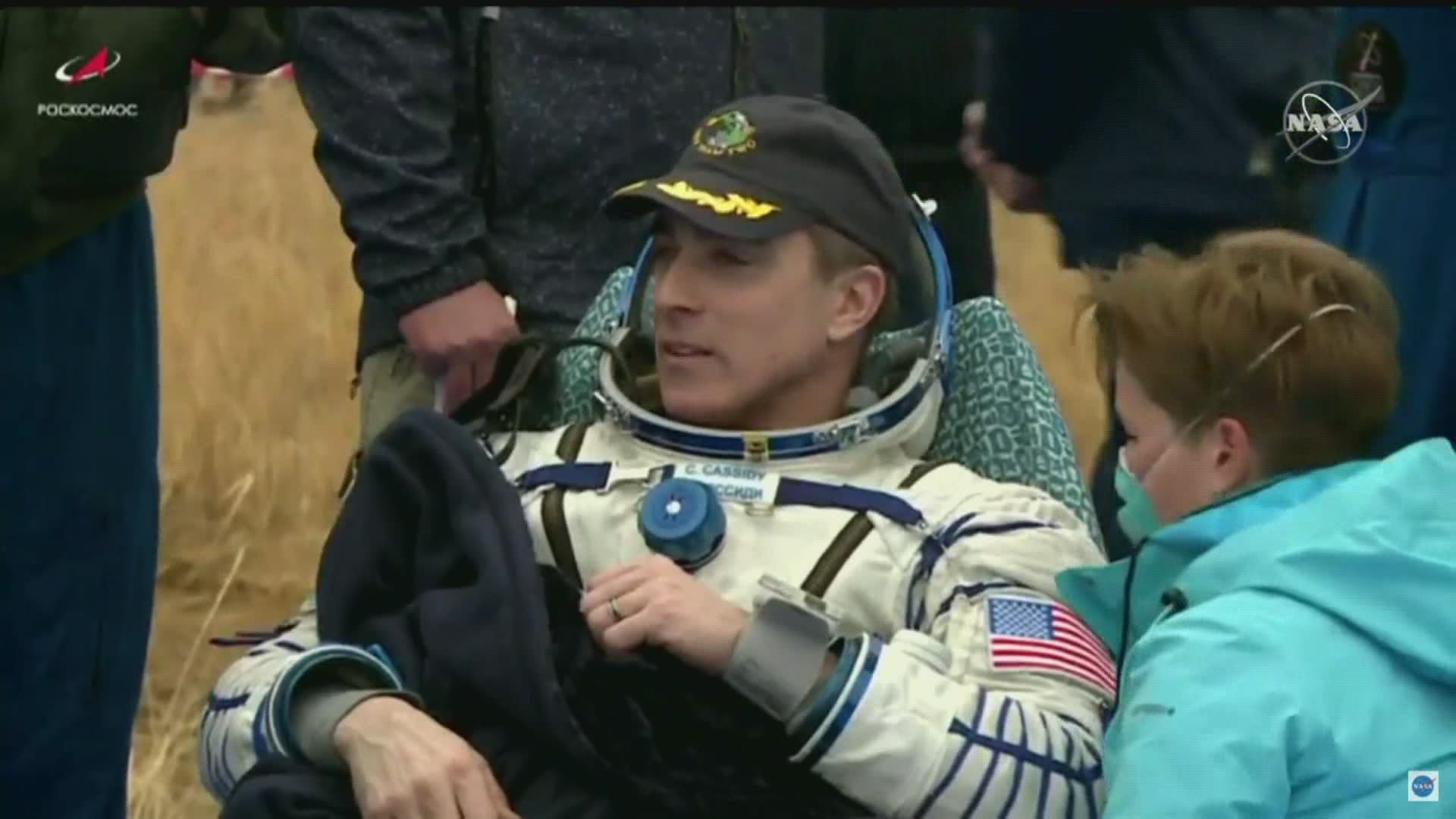 DZHEZKAZGAN, Kazakhstan — And just like that, NASA astronaut Chris Cassidy is back on Earth for the first time in six months!

After splitting into three modules a parachute deployment aided in the trios' smooth return. Helicopters for recovery moved in shortly after to assist with retrieving the crew and the capsule.

Medical checks for Cassidy, Ivanishin and Vagner were required before officially returning home.

One of our @NASA_Astronauts Chris Cassidy and cosmonauts Anatoly Ivanishin and Ivan Vagner have safely landed in Kazakhstan at 10:54pm ET after spending 196 days in space: pic.twitter.com/8FTnVjYO32

The previous story is below.

After orbiting the Earth 3,136 times, NASA astronaut Chris Cassidy will get to step foot on the planet once again.

Cassidy, Expedition 63's commander, along with Russian cosmonauts Anatoly Ivanishin and Ivan Vagner of Roscosmos have been aboard the International Space Station since April 9 while working a six-month mission.

They are set to return on Wednesday, Oct. 21 with the crew closing the hatch to their Soyuz MS-16 spacecraft at 4:10 p.m. EDT and undocking scheduled for 7:32 p.m.

The three-man team will then touch down via a parachute-assisted landing around 10:55 p.m in the remote town of Dzhezkazgan, Russia.

But before they go, Cassidy will hand over ISS command to newly-arrived cosmonaut Sergey Ryzhikov in a change of command ceremony.

Cassidy worked on several research experiments while on the orbiting laboratory including Onco-Selectors, the Droplet Formation Study and worked with Astrobee "cube-shaped, free-flying robots" that were being tested to be used as routine duties assistants for astronauts.

He also helped welcome NASA astronauts Bob Behnken and Doug Hurley on SpaceX and NASA's historic Demo-2 mission marking the first time American astronauts launched from American soil in nearly a decade. While on the ISS both Behnken and Cassidy took part in four battery-replacement spacewalks.

And if that wasn't enough, this mission marked Cassidy's third flight. Meaning he's spent the fifth-highest total amount of days in space among U.S. astronauts at 378 days.

Expedition 64 will now take over on the ISS.

You can catch all the action on launch day on NASA TV. A list of daily streams can be found here. Or tune into 10 Tampa Bay where we will be streaming live on Facebook, YouTube and Twitter.