The federal government will no longer regulate the movement of borer-infested wood. Instead, those resources will be used for a new tactic. 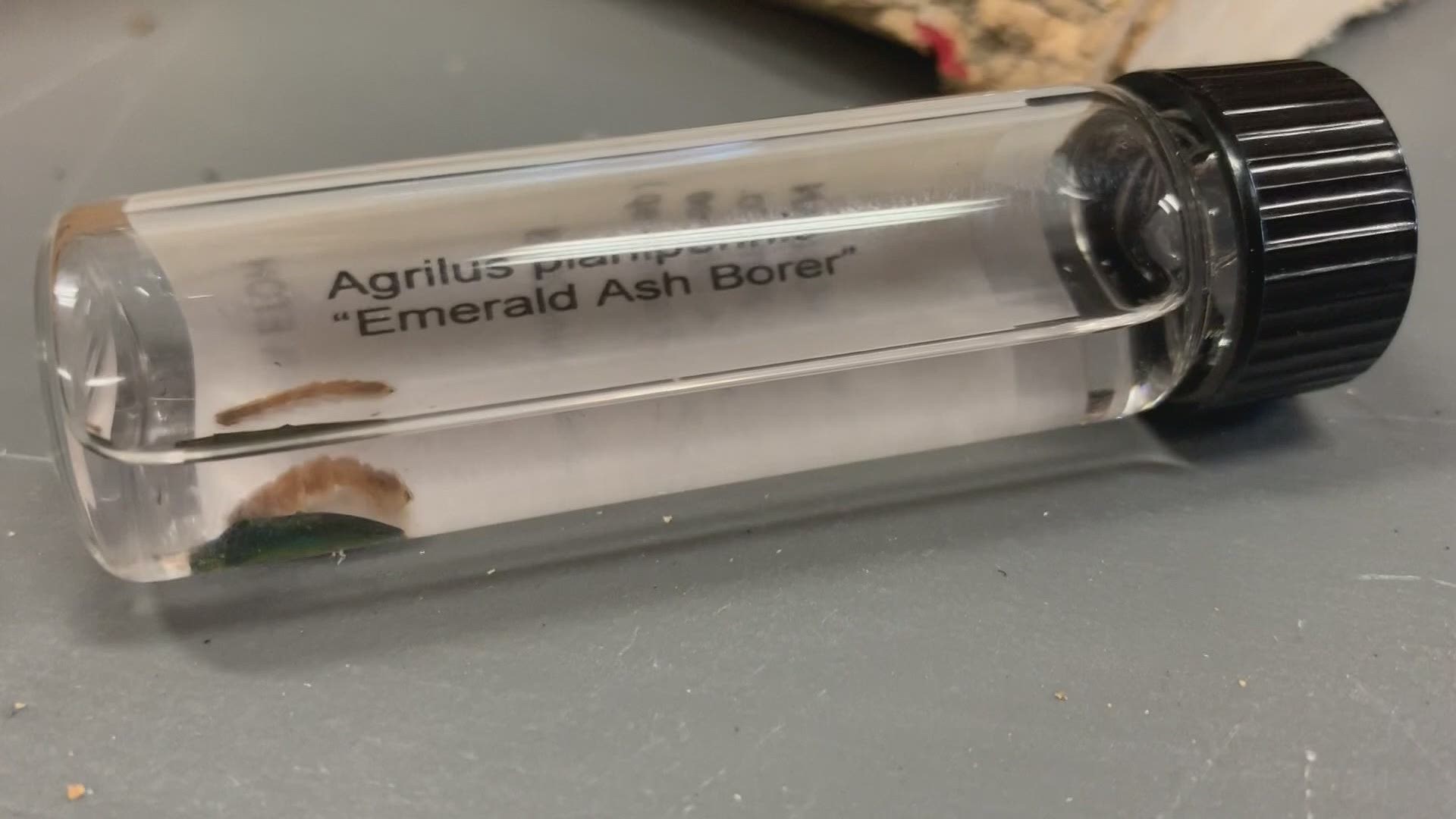 MAINE, USA — The U.S. Department of Agriculture is changing its tactics in the battle against the Emerald Ash Borer.

The federal government will no longer regulate the movement of borer-infested wood. Instead, those resources will be used for a new tactic, releasing tiny wasps that help kill the borer.

Emerald Ash Borers only attacks ash trees, according to the Maine Department of Agriculture, Conservation and Forestry. There are 480 million ash trees in the state of Maine.

The beetles lay eggs on the bark of ash trees, the eggs hatch, then the larvae feed on the tissues of the tree, disrupting the movement of nutrients and water within the tree, causing the tree to die.

Maine horticulturist Gary Fish said the efforts to stop the spread of the Emerald Ash Borer will remain strong here in Maine.

"The state forester Patty Cormier has put into place an emergency order that will basically prevent any infested materials from coming in from other states, and potentially also will help us to keep anything out from Canada."

"We remain committed to slowing the spread of EAB through quarantine, education, biological control, and advocacy for careful ash management," stated DACF Commissioner Amanda Beal. "For each of these efforts, the most important aspect is every individual doing their part to safeguard our natural and cultural resources."

"This is not the time to throw in the towel on the EAB quarantine in Maine. Maine Woodland Owner members and landowners like them are among the people who will be most impacted by the faster spread of emerald ash borer if a quarantine on the pest is not continued," Executive Director of Maine Woodland Owners Tom Doak said. "I recognize a quarantine does not prevent the spread of this pest, but it does slow it down. With the time bought, ash already on woodlots will increase in value, and landowners will have more options for management before the insect arrives."

"Our research partnerships and engagements with Native basket-makers and harvesters here in Maine and across the northeast show that the EAB is as much a threat to the cultures and well-being of Native communities and economies as it is a threat to trees," explained Dr. Darren Ranco, Chair of Native American Programs at the University of Maine, and Founding Member of the EAB Ash Task Force. "Deregulation would severely limit the opportunities and methods we collectively have to minimize these harms on Native economic and cultural issues."

The best way you can help protect Maine forests and fight the spread of the beetle is to not move firewood from place to place. If you want to camp, buy firewood at a local store or at your campground.

Here are some signs of Emerald Ash Borer.

If you think you've identified Emerald Ash Borer in Maine, please fill out this form.